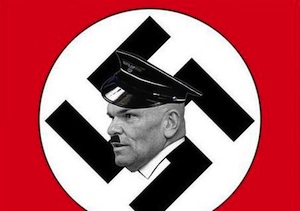 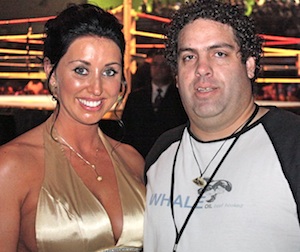 As an online discussion grows longer, the probability of a comparison involving Nazis or Hitler approaches 1.

I saw the misinterpretation of Godwin’s law: “first person to mention Hitler, Nazis, or Fascists admits they have no more contribution to make to the conversation. They’ve lost”
… tossed via a comment on WhaleOil’s blog at North Shore Mayor Andrew Williams for daring — I say DARING — to post a satirical picture of a moustached and SS-capped (gasp) Local Government Minister Rodney Hide on a Nazi flag (gasp) on his own Facebook page (double gasp).

This act drew howls of (mock, surely Cameron?) outrage from Mr Whale Oil blog himself who, among other, well, just silly OTT things he sprayed about his website, called Williams “foul beyond belief” (!) and “disgusting” and “filthy”. (Gee, overstate things much, Cam? Chillax, bro, Rodney can cope.) The tradition of political cartoons/caricature is far more extreme than this trifle.

From where I sit, (but I don’t have a ‘law’ on Wikipedia) when you launch a diatribe like Cameron’s against Williams, you’ve lost.

Spouting personal abuse actually demeans you — whether you’re Cameron Slater or Andrew Williams. (In my college debating team we lost points for abuse. In Parliament it just gets you booted out of the ‘debating chamber’. Damn right. Stick to the issues.)

Anyway, to (gently, I hope) invoke Godwin’s law myself:
I personally find the way the Auckland ‘supercity’ amalgamation has been um, err, handled undemocratic, to say the least.

I like Rodney as a person, but in this local government role, on this issue, it strikes me he frankly IS acting like a bit of a Totalitarian.