Before last November’s election I posted a comment about National Party proxy Cameron Slater’s intense and apparently undying hatred of Winston Peters in National’s desperados get perfervid about Peters.

Of course, that was when it looked like the John Key/John Banks ‘cup of tea’ — plus Peters’ own campaigning ability and talent for capitalising on the vaguest, slenderest sense of ‘outrage’ — might be turning his party’s electoral fortunes around.

As it turned out, despite the  hysteria alarm and ad hominem attacks propagated by National Party figures from the lowly attack blogger up to National’s chief salesman … Peters (and his team) marched triumphantly back into Parliament with 6.6% of the vote. That’s democracy for you.

Anyway, back then I described Cameron Slater’s contribution to the political discourse in pretty negative terms:

Convicted criminal Cameron Slater delivers ‘comments’ (retch) that, if not defamatory, are personally denigrating, abusive and insulting (shrieking all the while that National’s enemies Labour and the Greens are ‘nasty’. Such rich irony).

Like a dead rat stinking and rotting in a wall, convicted criminal Cameron Slater’s deceptive and one-eyed ‘reports’ (vomit) lower the tone of political discourse around him to something worse than goofy drunken sledging. He tells people he’s ‘mellowed’, and maybe that’s true, maybe it’s just pre-election jitters at work, but what he’s been writing lately (in my personal view) is inaccurate and vile, a lot of it.

Most of the time what he says doesn’t matter. That’s probably true about this time too, since, his attempted self-aggrandising fantasy life aside, convicted criminal Cameron Slater blows his dog whistle mainly to his racist, homophobic, Tory in-crowd. Although his (no other word for it:) bullying attempts to pick a fight/entrap politicians on Twitter strike me as ‘off ‘in a different way. He’s a stalker, but then, hasn’t social media made all of us that way, a little bit?

It may appear mean-spirited of me to use the epithet ‘convicted criminal Cameron Slater’. Sure, I can understand how that could offend. But for context, read this post: Thin-skinned media critic Cameron Slater spits dummy, you’ll see that he routinely suggests those in the media and others with whom he disagrees (whether personally or um, professionally, I guess) act unethically — even illegally. So the irony of actual criminal judges like Justice Harrison and Justice Harvey being on the record with their assessment of Cameron Slater’s own actions and his plausibility should not be ignored, surely?

Anyway, since then, November, when I last wrote about Cameron, a quick review of his outpourings (yik) shows me nothing’s really changed — except perhaps an increase in the volume of bile being pressed through the distorted sphincter of Cameron’s view of reality. He’s continued to trot his chorusline — belting out his signature tunes, including his predictable loathing of anyone/anything on ‘the left’ and also his  fixated personal attacks on Winston Peters, who Cameron Slater (convictions notwithstanding) calls a ‘liar‘ — and worse — on a regular basis.

I mentioned Cameron’s stalker propensity/obsession: his “…bullying attempts to pick a fight/entrap politicians on Twitter [which] strike me as ‘off ‘… “ Well, he’s still doing that too — the very epitome of an internet troll.

Look at this exchange from the weekend, much in the style of Clint Heine’s Drunken yobos spit in MP’s face, then skite to their mates like idiot schoolboys

On Friday night after the cricket, at 10.15 Labour MP Annette King tweeted to her twitter followers about the New Zealand team’s win  … 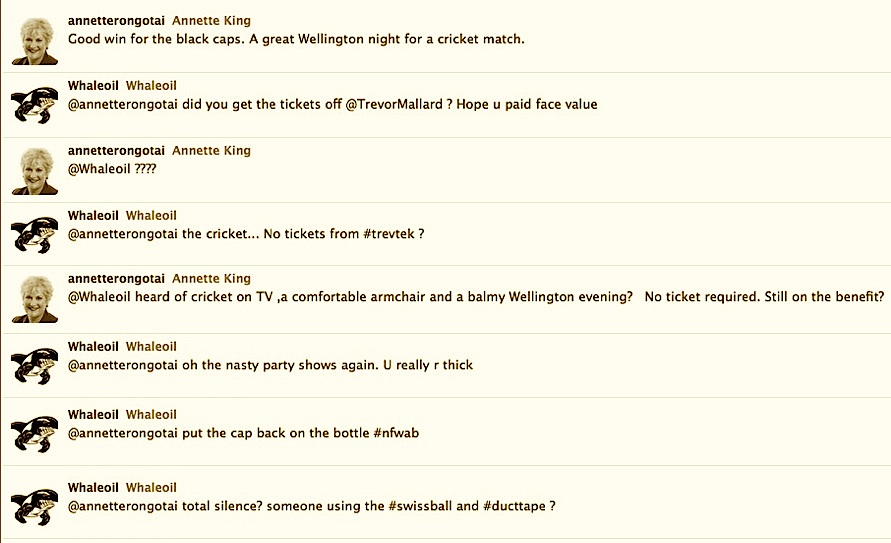 Showing Labour how to be nasty. Sad boy. (click to enlarge)

Honestly, someone should tell Cameron Slater that calling Labour ‘the nasty party’ while yourself acting like  a nasty prat, isn’t convincing. Personal abuse such as that adds nothing of value to political debate, in my opinion. It’s not even good heckling, something I recognise and respect.