This disgusting ad from the NRA is *meant* to offend us.

Nasty piece of work from the NRA. An abusive, half-thought-out propaganda hatchet job on President Obama disgracefully using the spectre of someone attacking his daughters. The idiocy of calling the first black man elected as president of the USA ‘just another elitist hypocrite’ is breath-taking — even for racist RWNJs like them:
(See UPDATE below.) 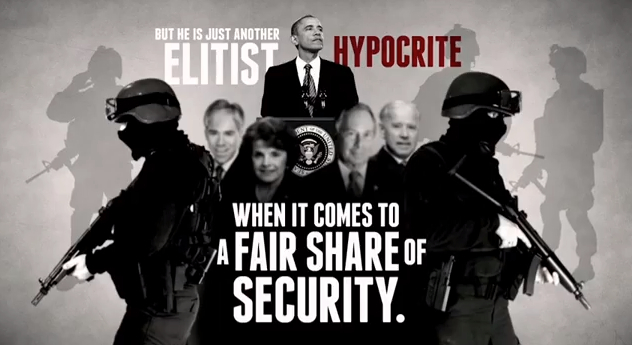 Rachel Maddow called it out as trolling, and her ‘word of the day’ segment (below) is nicely put together, even if some might call it a touch long-winded and earnest. I say good on her. Maddow makes the point that this kind of stuff is a wail for attention, akin to ‘Please notice me!
Puh-leeeeeease be offended by me’.

Trolling is a key part of the conservative entertainment/media business model. These guys say stuff all the time that they do not intend to be persuasive. They’re not trying to explain something or to bring people along to their way of thinking. They’re doing something to attract attention and hopefully condemnation and outrage from the mainstream and particularly liberals.
They want to offend you, They seek to offend you. That is the point. They want the attention and they really want the condemnation because, hey, attention is attention and clicks are clicks on the website. Bad publicity is still publicity. But more importantly, the key part of their base audience — that they are trying to monetize — likes anyone who gets condemned by the mainstream … it’s a shtick that pays.

Maddow’s comment about the dishonest ‘clicks are clicks’ shtick reminded me of this recent insight/confession from local troll Cameron whaleoil Slater, highlighted by the NZ Herald‘s David Fisher @Fish_NZH

Trolling: 'Clicks are clicks', right? Cameron Slater letting the cat out of the bag about his venal motivations.

And as well as just making stuff up, right wing attack bloggers like Cameron Slater also troll for attention in a different way — cyber-stalking, and trying to provoke ‘bite-back’ interactions with public figures whom he then characterises as ‘nasty’.

Good on Rachel Maddow for calling this trolling garbage out for what it is: Nothing to do with a debate about ideas, nor real concerns about important issues like ‘fairness’ and ‘liberty’.

Trolls like this are merely crying out for attention, cheerleaders for ‘the base’ (or ‘army’ in whaleoilspeak), exploiting them and feeding their ignorant hostility, prejudice and paranoia about ‘pinkos’, ‘liberals’, trade unionists, social welfare recipients, academics, people of colour, and the ‘mainstream media’.

Yes, there’s a transaction, but, from my point of view, it’s a fraudulent one.

UPDATE Sunday 20 Jan: Also, The NRA attack ad turns out to be factually wrong it its central claim that the school the Obama girls attend is protected by armed guards. It’s not. Ooops. See NRA Ad Dead Wrong, Thanks to Breitbart False Report | Crooks and Liars (As you would expect, Pres­i­dent Obama’s daugh­ters are protected by the Secret Ser­vice, with guns, surely. But their school does not have armed guards.)