« Makes you think
Political neutrality of the SIS – er, FAIL » 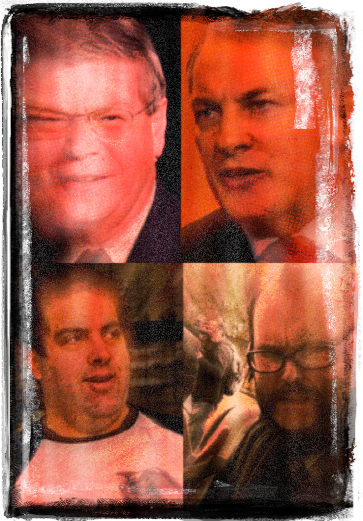 Media wannabe Martyn ‘bomber’ Bradbury, twisting on the spit of his own sour double-mindedness appeared yesterday to pour scorn and contempt on his Right wing foil, blogger Cameron Slater:

” … to think that the SIS would hand papers like that over to Slater of all people is unbelievable.”

“It is an incredible thing to watch, information as sensitive as this being handed out to the gutter (sorry Cam, but come on, you are that pet crocodile thrown into the sewer of the gutter), WTF are the SIS thinking? “

Really? Why the vitriol? From where I sit, it seems Bradbury’s near constant abuse of his (UPDATE: until now) regular guest commentator is fueled by an oily blend of ideology, frustration and professional jealousy. (On the other hand, it could be man love.)

Are some citizens more equal that others, Martyn?

ANY citizen can submit an Official Information Act request. Including Cameron Slater. Does Martyn Bradbury expect us to accept his fetid implication that Slater (‘of all people’, ‘pet crocodile thrown into the sewer’) should be discriminated against or somehow debarred from using the OIA? That’s a slippery slope.

Should people with whom Martyn disagrees receive second-class treatment from government agencies? Follow his tortured logic and it seems that is his call — which is consistent with his previous anti-democratic statements advocating the exclusion of Cathy Odgers from potential candidate selection for ACT and former white supremacist Alex Fogerty (and anyone like him) from even taking part in NZ political debate! That way leads to gulags, as I said before.

Judging by appearances, Martyn Bradbury has an issue with accepting dissenting voices. That’s an unfortunate trait for someone whose ambition appears to be to one day grow up to be a real life ‘media commentator’ that people actually listen to.

While it’s common for the Official Information Act to be utilised by journalists and others in the ‘media’, it is a law designed to enable citizens to hold their government machinery accountable.

That (despite Martyn Bradbury’s and others’ hallucination/fear/loathing) is all ‘Citizen’ Slater did. That he was first off the mark, and cannily couched his request in deliberately limited terms that seemed likely to him to get a quick result (i.e. limited to papers that were probably already on the recently-smeared SIS director’s desk) just makes him an effective inquirer.

Broad OIA requests (fishing expeditions) require more bureaucratic ‘processing time’, as anyone accustomed to dealing with government agencies knows. Bradbury and others’ agitated mis-statement of the facts (e.g. describing the SIS as ‘leaking’ info to Slater) just further corrodes their credibility and, forgive me, makes them look like uninformed plonkers.

Actions of the SIS — Tucker wants to go home?

On the other, political, question: Should SIS boss Tucker have ‘expedited’ Slater’s OIA request: Duh. What was his alternative? Delay? Sit on the request? Obfuscate? (i.e. Standard operating procedure.) Would that have been ‘better’?

I’ve been told that Tucker presaged his ‘notice’ to the Prime Minister and Mr Goff of his intention to grant Slater’s OIA request by seeking Crown Law Office advice about his options. So Goff’s (reported) ‘objection’ to the release was met with words to the effect of: “Crown Law says we have to comply with the OIA and supply redacted documents.” Bureaucrat snooker.

A quick survey: Do you think Mr Tucker, faced with his integrity being used as a political football, was (a) more inclined or (b) less inclined to shield Mr Goff from any legally-compliant release that appeared to contradict Mr Goff’s assertions against him? Gee, let me think.

Better question: Do you think a career public servant like Tucker appreciates a politician making him out to be, let’s not mince words, a liar? No. (But what if it’s true?)

I studied bureaucracy at Victoria (majored in Politics and studied Public Power and Administrative Behaviour at Vic under Bob Gregory) and let me tell you this: Politicians and public servants have a prickly relationship at the best of times. A politician who publicly attacks a member of the civil service is making enemies he really can’t afford to make. They will find a way to hurt him. Members of both parties fall into this trap. This spat between Tucker and Goff can be seen as an example of bureaucratic whiplash.

Some have made the point, rationally, that these events harbour the ‘politicisation’ of the Security Intelligence Service.

I’m not so sure it is political. I think it’s personal. Tucker’s (reported) actions of ‘soliciting’ OIA requests from media (if true) … and then by-anyone’s-standards clearly fast-tracking a response to the first OIA request to right wing/National Party blogger Cameron Slater can be seen as personally vindictive. I think he was trying to defend his reputation from political attack. Has he overstepped the mark? Yes, I think so.

In my view Tucker should have sucked it up and maintained a professional silence. Is that a challenge? Yes. Don’t like it, Mr Tucker? Resign. Leave the politicians like John Key and Bill English to malign Phil Goff as they have done, effectively calling the Leader of the Opposition a liar and publicly, repeatedly, questioning his integrity. Their disrespect for Goff is unquestionably, transparently political. The more they (and the likes of Cameron Slater) pile on kicking Phil Goff … the less plausible Goff’s so-called ‘sins’ and [alleged] faults seem.

A head of department’s first role is to protect their minister. That’s the politcal reality that Tucker seems to have forgotten, or has put aside in (a) petulance, or (b) embarrassed guilt. (Don’t forget to consider the unfashionable possibility that Phil Goff might be right.)

Tucker’s role as head of department obliges him to protect his masters — in the first instance the PM … but, being the SIS, the position of Director is unique in that he is also by convention accountable to the Leader of the Opposition — thus the requirement in this case for him to brief the Labour leader. If he tripped up, he’s only made things worse.

Tucker has demonstrated a lack of deference to one of his bosses. He has shown himself willing to be a loose cannon, and insubordinate. I can’t be the only one thinking perhaps he’s not cut out for the job. The political reality of the public service will not long tolerate such untrustworthiness and rebellion. There’s no room for cowboys in the top civil service, even if they are fighting for the survival/relevance of their patch.

Time to put Tucker out to pasture? Yeah, I think so. His actions are, effectively, notice that he’s had enough and wants to retire. OK.

UPDATE: As I was writing this, Cameron Slater has just blogged that he’s had a gutsful of Martyn Bradbury’s appalling disrespect and will decline further invitations to be drenched in his spittle. Good call, if you ask me.