On a collision course

‘Hell no’ Bradbury says (or words to that effect) because he says she’s a ‘far right hate merchant’ who has previously expressed what he says are outrageous hateful statements about the poor. Despite her ‘fierce intelligence’ she should not even be selected as a candidate, he says.

What business is it of Martyn Bradbury’s who ACT chooses as its candidates? None, is the answer, but he is perfectly entitled to express an opinion. Aren’t we all?

Cathy/Kate can certainly hold her own, judging by this for instance.

A white supremacist in the woodpile?

Fast forward a few days and the same Martyn Bradbury declares as ‘breaking news‘ 2005 (six years old) emails linking a founding member (whatever that is) of the newly-formed anti-MMP lobby group and knitting circle ‘Vote for Change’ to an Australian white supremacist group. (I am resisting the temptation to indulge in Aussie jokes. Re-sist-ing.)

Again, on the basis of outrageous hateful statements he showed this Alex Fogerty character apparently wrote (at 19?) and his past membership of that political witches coven, Bradbury seeks not just to embarrass Fogerty and the Vote for Change macramé group but, in a similar fashion to his voluble campaign against the very idea of Catctus Kate’s candidacy for ACT, seeks to disenfranchise Fogerty and his ilk.

You think I’m making that up?
Look: 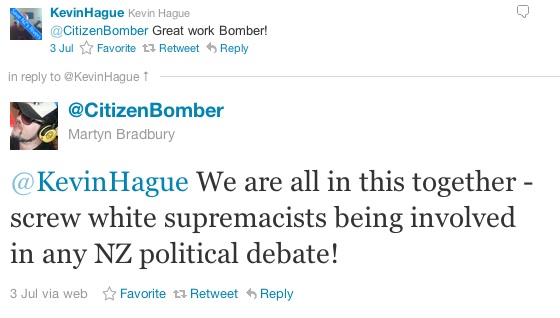 Some animals are more equal than others ...

That shut them out suggestion, as I said to Bradbury on Twitter (see conversation above right) is a step too far — even accepting Alex Fogerty did espouse white supremacist views … views that most Kiwis would shun. Sorry, Bomber, that qualifies as an outrageous hateful statement.

Denying people with whom you disagree participation in democracy in this way — Cathy Odgers from candidate selction, Alex Fogerty from ‘involvement in any NZ political debate’ — is starting to sound a little too Animal Farm-ish for my tastes.

It is, at the very least, to use the novel term Bradbury quoted re Alex Fogerty’s involvement in the Vote For Change wine tasting club — ‘intellectually skanky‘.

A competition of ideas

Politics, if it is anything, is a competition of ideas.  When players (or those who fancy themselves as players) start to reflexively denigrate their opponents as a group, or seek to erode other citizens’ rights to participate in democratic processes, well, there’s a name for that.  It starts with F- and ends with -ascism.

I haven’t paid a lot of attention to Martyn Bradbury’s politico-media career until now, but it’s election year, so why not? I’ve got to say, from what I’ve seen and read so far, I find him really entertaining, he delivers the left-wing message with passion and gusto (all good) …  and he’s ‘out there’ in almost a stand-up comedy, Te Radar kind of way way. Good stuff. I linked to his show here.

Cactus Kate and Cameron Slater are  better known quantities (to me anyway). Both wear their hard right partisanship (and support for each other) on their sleeves, if not their exoskeletons. They’re not joined at the hip, though. I don’t agree with their every claim or interpretation (especially Cam’s, who gives every appearance of being a one-eyed zealot at times — but I guess it takes one to know one. Ahem.)

I read Cathy’s declaration of ‘my party right or wrong’ around the time Don Brash pushed Rodney Hide under a bus (without even being a member of ACT) with a twinge of disappointment. But two things: (1) Good on her for admitting it, and (2) she’s entitled, surely, to exercise her democratic freedom any way she likes. (That IS the idea, after all.)

Each of these bloggers can in their way be quite insulting, but, you know, that can be endearing too, just as Martyn Bradbury repeatedly referring to  David Farrar as ‘The Penguin’ and the tobacco industry as ‘dirty, filthy tobacco companies …’ can bring a smile to my face. I think it was Cactus Kate who introduced me to the idea that one can/should tell certain commenters on your blog to F*** off. Quite right.

But, sorry Martyn, that ‘some voices should be heard and some shouldn’t’ agitprop puts you on a collision course with, well, umm, Democracy. [‘No taxation without representation.’ Capiche?]

And as for today’s effort … well, Martyn, if you’re reading this, I deplore publication of this kind of self-aggrandising pap:

Mate, that stuff just riles up the opposition to re-double their efforts. It also makes you look a little unrealistic and self-important … even slightly narcissistic. It does you no good.

If you really think that I’ve ‘taken out entire right wing plan to stymie MMP’ bullshit, er, hallucination er, stuff, my (un-asked for) advice is: mark it down as ‘Not for broadcast’. By all means, gloat to your friends and family, but leave it out.

The rest of us know the battle to keep (or repeal) MMP is still a long way from decided.