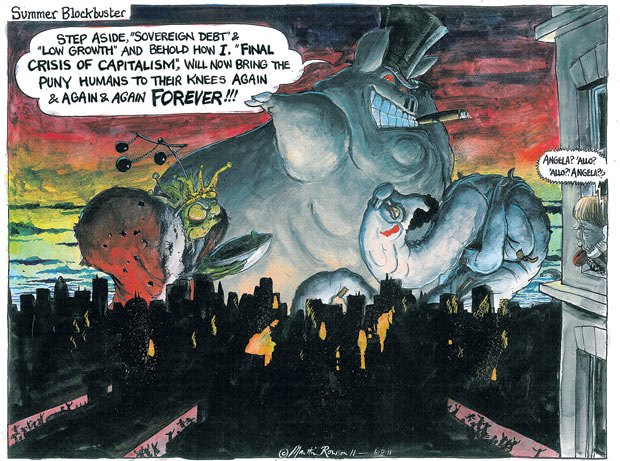 From The Guardian: Martin Rowson on the final crisis of capitalism
European and North American stock markets are at their most volatile since the 2008 collapse of Lehman Brothers.

We had a GFC film festival at our house over the weekend watching Michael Moore’s Capitalism: a Love Story and the Academy Award winning documentary Inside Job. If you haven’t seen Inside Job, see it. Really. It will leave you speechless.

Wow, both films left me with a sour haze only slightly lifted by the All Blacks Bledisloe Cup win over the Wallabies (30-14).

In the context of the fake debt ceiling ‘crisis’ and the S&P ‘downgrading’, these films look prescient. They expose and condemn the same old faces and political system they run — even though some key players ‘declined to be interviewed for this film’. Ghastly.

I have to say, it really does look like the US political system works for Wall Street, and, in the same way the US economy has bankrupted itself to fund arms manufacturers, the system also seems to bend over backwards to pander to the big banks, with self-interested bankers slipped into regulatory offices with an apparent agenda to dismantle the watchdogs.

Larry Summers. What can I say? Yuck. These guys give a whole new meaning to the phrase ‘public service’. Please.