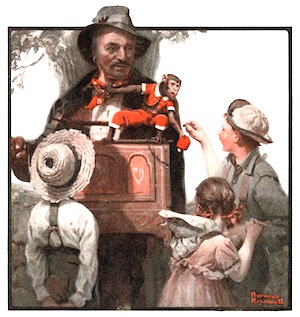 Judging by accounts of Shaun Stenning’s unpublicised but reportedly central role in the recent NZ Property Guru’s [sic] ‘educational events’ (described as ‘hard core in your face sales pitches delivered by salesmen’ by one attendee), I wonder if the self-proclaimed ‘gurus’ on parade — Dean Letfus, Steve Goodey, Kerry Christian, Kris Pedersen, Kent Leicester, Kieran Trass (anyone else?) — were the real ‘show’ … or were they just a chorus line of ballerinas working for this evidently smooth-talking Aussie Svengali?

Who were the monkeys and who was the organ grinder?

I’ve heard from two sources — can anyone else confirm this? — that Shaun Stenning’s ‘cut’ of the NZ Property Guru’s [sic] income for the two recent weekend events in NZ was an impressive 25% off the top.

NOT 25% of the $47 ‘buy one get one free, go into the draw for a TV’ door takings.
No.
25% of any up-sell or sign ups resulting from the reportedly hyperbolic, hard-sell, rags-to-riches, live-the-life-of-your-dreams, step-forward-into-your-future, see-the-opportunity-and-take-action-NOW-Sign-HERE!!! -type sales pitches.

For example, as highlighted by attendee David Whitburn: the Millionaire Mastery VIP ‘mentoring’ — now with ‘free’ US tax liens package normally valued at US$5,995! — was promoted thus: “Total ‘Realistic’ value $89,572” … Sign up TODAY for just $19,995 (!), four easy payments. (Wow, at least tickets to the sell-fest, oops, ‘educational event’ cost only $47 for you and a mate!)

David Whitburn revealed last week the disconcerting development that this $19,995 Millionaire Mastery VIP, um, program which was formerly delivered by the comprehensively backstabbed Richmastery supremo Phil Jones and ex-RM Wellington franchisee apartment developer Steve Goodey, is now, it appears, run by Steve Goodey and Dean Letfus — and this less than a year after Dean Letfus PUBLICLY TRASHED such US tax liens sales schemes as “high risk” for Kiwi investors.

Dean Letfus called them “snake oil complete with white shoes and wagons” and, along with local bean counter Matthew Gilligan (who even issued a formal ‘commercial alert‘), warned people to stay away from US tax liens.
So, it seems, well, … inconsistent of Dean Letfus (at the very least) to now PROMOTE them — as David Whitburn pointed out. Why would he do that?

Whose baby is it?

I’ve also been told by someone who attended, that Shaun Stenning enlightened punters at the ‘educational event’ in Auckland about the origins of the ‘Guru’ enterprise and events. Despite NZ Property Guru’s [sic] appearing to be a 100%-Dean Letfus-owned enterprise, he announced it was in fact, he, himself, internet wunderkind Shaun Stenning, who conceived of the idea, packaged it, and acted as impresario and pitch man for the local yokels. Hence the resemblance of so much of the Guru’s [sic] marketing collateral to the Stenning clan’s Geekversity internet marketing guff ( — if you’re interested, see how that’s working out for others by browsing the open-to-all ‘Geekversity Issues’ Facebook group.)

Certainly that explanation accords with Shaun Stenning’s somewhat transparent ‘authorship’ of the unintentionally funny threatening letters (PDF), one purportedly from Dean Letfus to David Whitburn demanding publication of an ‘unconditional apology’ and the immediate removal of the ’emotionally hurtful’, ‘defamatory’ and ‘copyright infringing’ (er, not really) photos, web images and statements on Whitburn’s blog.

Elsewhere Dean Letfus recently called Shaun Stenning ‘one of my main business partners‘. Well, with a share of 25% off the top, if that’s true, No wonder!
And no wonder if Shaun says something like: ‘I’ll dress down, you dress up’, Dean says: ‘Hokie-dokie!’

Any thoughts or comments?
(Thanks to those who’ve contributed information and background so far.)

Note: This post details the facts as I believe them and the commentary expresses my honest opinion. I stand by my comments, however, if I’ve been misinformed, or misunderstood what I’ve been told or misinterpreted any matters discussed here — always a possibility, as I rely on sources and first-hand witnesses’ accounts — I invite those concerned to contact me directly to clarify or correct any issues of fact, using the email address here. It is certainly NOT my intention to mislead anyone. –
Regards, Peter Aranyi. © 2010 All rights reserved. [Image: Organ Grinder by Norman Rockwell from www.best-norman-rockwell-art.com with thanks.]