« My review of a recent Empower Education event
More ‘straight talking’ … but is that what it is? »

Why are the get-rich-quick boys in such a HURRY?

The substance behind the Photon gossip

by Tim Burrowes June 17th, 2010
One of the perks – and frustrations – of being a journalist is that you often get to hear interesting gossip.
Perk because it’s nice to hear these things first. Frustrating because you often can’t stand up for publication what you’ve heard. …
Read on here

Photon, if the name rings a bell, is the company which bought the now-infamous Geekversity er, enterprise … then shut it down at a big loss amid legal threats and a clamour for refunds. Browsing mUmBRELLA’s archives, it transpires there’s a lawsuit going on, apparently. It’s just one of the current woes beleaguering Photon. 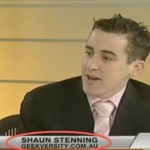 Shaun Stenning, you may recall, was the ‘face’ of Geekversity, telling Australians and Kiwis he could turn ordinary mums and dads with ‘little or no computer experience’ into money-making internet marketing entrepreneurs. These “big claims” as one enthusiastic interviewer put it, turned out to be vapour. Watch the video.

It turned out these “students” were not the only group who were disgruntled, apparently. According to the original report in the Sydney Morning Herald:

by Julian Lee | SMH 29 Jan 2010
Just weeks after washing its hands of the controversial Geekversity internet get-rich-quick scheme, Photon Group is being sued for more than $4 million by a former director of one of its internet companies.

Late last year the listed marketing services company narrowly avoided a court action after aggrieved ”students” of the scheme, which charged people up to $21,000 to learn how to make money from internet traffic, demanded their money back.

Now a former director and principal shareholder of iMega, which at its peak generated monthly earnings of $750,000, is suing Photon for allegedly failing to pay $4.4 million in earn-out fees.

That’s interesting, I thought. Then there’s this from the same article which is fascinating:

The fortunes of iMega, which was a leading player in click arbitrage, changed in November 2006, the same month Photon took control of the company after paying what appeared to be $37 million in a mix of cash and shares for it earlier that year.

Monthly profits at iMega plummeted overnight from $750,000 to zero [Comment: Gulp. Ouch!] following Google’s decision in late 2005 to improve the quality scores that determine a landing page’s ranking in results returned by the search engine.

Google made the change in part to prevent click arbitrageurs such as iMega from gaming the system by leading internet users to a page simply to serve them up ads. iMega bought cheap clicks from the Google AdWords programs, then directed that traffic to more popular websites, serving users’ ads along the way and pocketing the difference.

Following Google’s move, Photon directed iMega to blast the internet with new websites with higher quality scores to beat the system before finally changing the company’s direction, which eventually ended up as Geekdom, which in turn ran the Geekversity program.

We know how that all worked out, don’t we? Not good. 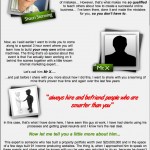 At present Shaun Stenning and the Stenning family performing troupe (including property spruiker, ‘guru’, ‘Mr X’ aka Dean Letfus) are, by the look of things, racing around NZ, Australia and Asia (Singapore, Malaysia, Thailand, Hong Kong …) assiduously hawking their LATEST get-rich-quick-through-the-internet scheme variously called twa.lk 2.0, sni.pr (whatever) — as we have discussed before — and breathlessly telling people they need to get their ‘mindset‘ right to make serious money.

Why the big hurry? I wondered, then considered a few points that emerge from the SMH article above:

(1) Google changed the rules to prevent people from ‘gaming the system’ — and iMega profits ‘plummeted overnight‘ … to zero following that. Not a very stable business, then, huh?

(2) That ‘gaming’ phrase reminds me of the You Tube Traffic Thieves ‘report’ with Shaun Stenning’s ‘Twa.lk 2.0’ branding (and poor written English) all over it. ‘Gaming the system’ seems a mild way to describe what that odious pamphlet was suggesting, if you ask me.

(3) “…leading internet users to a page simply to serve them up ads.”
Um, Hello? Shaun? Dean? Ian? Matt?
Isn’t that pretty much EXACTLY your sni.pr MFA (Made for Adsense/Made for Amazon) ‘strategy’? [cough, splutter] In a nutshell?

Isn’t that what all your various ‘niche’, ‘keyword’, ‘search ranking’ smoke-and-mirrors stuff is all about?
Isn’t that IT? … Really?

“…leading internet users to a page simply to serve them up ads.”

Where is the enduring value in misleading people to drive internet ‘traffic’? Bleurgh!

(4) Maybe now one can understand the frenetic pace these roosters demonstrate in getting out and about pitching their miracle ‘product’ to the punters … “Come to a free evening! We’ll even pay you to come!” etc etc.

MAYBE THEY’RE AFRAID Amazon/Google etc could at any moment — effectively — shut them down with an AdWords rule change, or a tweak to their search engine algorithms. It’s possible.

After all, it’s happened before.