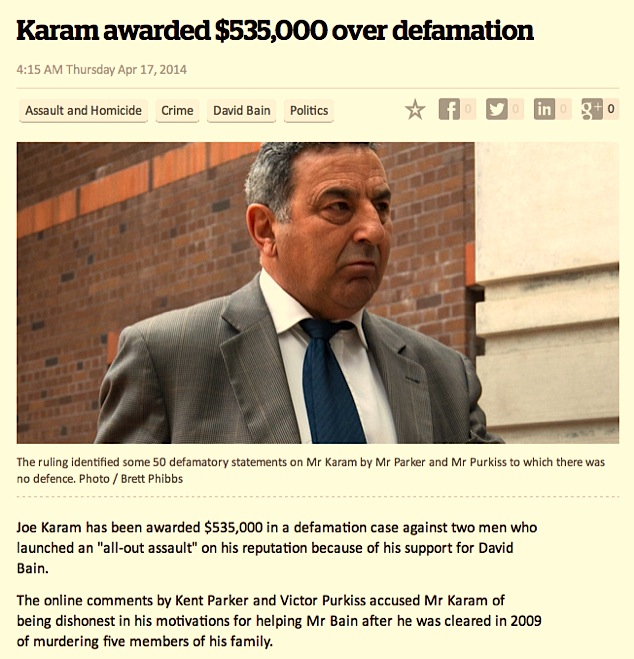 This defamation case should be a shot across the bows of various internet wide-boys who think ‘defence of truth’ or ‘opinion honestly held’ is some kind of magic elixir or Get Out of Jail Free card. It’s worth noting the oh-so-easy-to-reach-for-until-you’re-tested ‘truth defence’ in this case was abandoned during the trial.

In her ruling, released yesterday, the judge [Justice Patricia Courtney] identified about 50 defamatory statements published on Facebook and on a private website by Mr Parker and Mr Purkiss — members of the Justice for Robin Bain group — to which there was no defence.
She ordered Mr Parker to pay damages of $350,500 and Mr Purkiss to pay $184,500.
She further punished the men by awarding indemnity costs against them because they “behaved egregiously” in choosing to use the defence of truth at the trial last October.

The indemnity costs ordered could be in the region of $500,000 according to the report.

More often than not, it seems to me, defamation actions are a game a ‘Chicken’ — Which party has the nerve to hold out? Many such cases (and other litigation) are settled out of court. In this case, a four year legal action and trial (not apparently delayed by any argument about whether the online publishers of the statements at issue were ‘a news medium’ or not) has ended in significant defeat for those who carried out the online attacks on Joe Karam, however sincerely held their beliefs. One of the defendants Mr Parker has announced his intention to appeal the decision.

Listen to the language around the protracted online reputation attacks directed at Joe Karam, viz:

Mr Karam said the men had made “an all-out assault on me [in] an attempt to show that I’m shonky”.

At the trial, Mr Reed laid out the case that the comments conveyed that Mr Karam lacked integrity, was dishonest, was motivated to support Mr Bain for financial gain and had defrauded the legal aid system. One of the posts compared Mr Karam’s campaign to free Mr Bain to Nazi propaganda, while another coined a new word to describe Mr Karam’s knowledge of the case.

To me, that’s redolent of this passage, quoted earlier in Part of the news media? or a “PR blog” dedicated to “destroying” reputations?, from the target of the protracted abusive online reputation attacks by Cameron Slater on his Whale Oil blog:

I have researched defamation law. I have represented myself throughout these proceedings. I couldn’t afford a lawyer so I have had to do it myself. But I make no claim to be a lawyer. Mr Slater is no more a journalist than he is a brain surgeon.
This man [Slater] embarked on a systematic, planned and relentless campaign to destroy me, not just professionally but personally. He thought he could do this with impunity. He was wrong.

Other than their actions in publishing attacks on someone else’s character, I make no meaningful comparison between Cameron Slater and the defendants in the Karam defamation case.*

Like many other NZ’ers, I personally thought David Bain’s murder convictions were justified at the time. But since then our justice system has quashed his convictions, then a re-trial acquitted him. Whatever one’s opinion, however one feels about the case, if you uphold the law, that’s where it lies: David Bain is acquitted.

From the look of the ‘Justice for Robin Bain’ group’s materials (other than the defamatory stuff about Joe Karam) their views of the Bain case — the narrative/evidence that convinces them of David Bain’s guilt — seem to me sincerely held. (There’s also a noticeable smack of conspiracy theory.) The trouble is, it looks to me like they’ve let frustration and passion lead them to publish assertions of fact and other written material that demonises and defames Karam … some of which goes far beyond what’s defensible as honest opinion, and which they couldn’t prove.

[71] The meaning of these posts is that Mr Karam improperly threatens those who disagree with him, misrepresents the evidence, uses methods such as those used by the Nazi propaganda and is to be compared to political tyrants such as those controlling NorthKorea. The post is a mixture of assertions of fact and opinion. But I find that the assertion that he “smudges” evidence is a statement of fact and the assertion that he responds to those who disagree with him by improper threats is an assertion of fact, neither of which was proven. The statements comparing Mr Karam’s methods to those used by the Nazis and that he is tyrannical and fairly compared to those in power in North Korea are also assertions of fact. The statements certainly convey that Mr Karam lacks integrity and is dishonest but more than that, is guilty of such gross distortion of the truth as to be compared to Nazi propagandists. They are unquestionably defamatory and are not expressions of honest opinion. (emphasis added)

The judge also repeatedly found the defence of claiming honest opinion without offering a ‘foundation’ or ‘factual basis’ for it was inadequate. Just one example:

[56] The statement meant that Mr Karam was motivated to help David Bain by the prospect of financial gain and was continuing to be involved for that reason rather than any genuine desire to assist Mr Bain. The statement was defamatory. It is an expression of opinion but there is no apparent basis for it. Nor is there anything to indicate the basis for the conclusion that is expressed. As a result, the honest opinion defence fails. (emphasis added)

[122] The complaint about this statement is that it meant that Mr Karam lacked integrity, had misrepresented his real motive for supporting Mr Bain and had defrauded the LSA. I accept this allegation. The plain meaning of these statements was that Mr Karam was motivated solely by money in seeking to ensure that there was an acquittal at the retrial and had cynically used his writing and media appearances for financial gain. Fmiher, it conveyed that he obtained legal aid payments to which he was not entitled and issued defamation suits for which there was no basis, all for financial gain. The statements were made against the public knowledge of Mr Karam having received legal aid payments and having commenced defamation proceedings. However those facts provide a factual foundation for the comments. I find that these statements were defamatory but that the defence of honest opinion succeeds in respect of them. (emphasis added)

But overall, notwithstanding some exceptions, Judge Courtney seems to regard the defendants’ actions in claiming these defences as reckless and unjustified, and says this, addressing costs:

[252] Mr Parker has behaved egregiously in advancing and maintaining defences which had no serious prospect of success. In particular, asserting the defence of truth to the point of cross-examining Mr Karam and opening his case before finally admitting under cross-examination that he was unable to prove any of the matters, in itself, justifies indemnity costs. Nor was there any prospect of the defence of qualified privilege succeeding. It is true that I found several statements to have been protected by the defence of honest opinion. However, that modest success does not outweigh the seriousness of his conduct in every other regard. There are to be indemnity costs against Mr Parker.

[253] There will also be indenmity costs against Mr Purkiss. Like Mr Parker, he asserted defences of truth and qualified privilege when neither had any prospect of success. Although Mr Purkiss did not appear at trial, the assertion of the truth defence put Mr Karam to the cost of having Mr Thomas’ evidence heard prior to trial and of preparing for trial. (emphasis added)

Following on from the distinctions about website and Facebook page administrators being responsible for comments/material posted on their sites by third parties (made in the same judge’s finding Wishart vs Murray & Ors we discussed last year) I wonder if this judgement will have a cooling effect on internet comments? Fat chance, probably.

Despite protestations of new-found maturity (‘Time to grow up’, etc) election year does tend to inflame the rampant character assassination efforts routinely carried out by some political/PR bloggers.

* As a result of the Whale Oil website’s protracted campaign against the Auckland businessman he is presently suing Cameron Slater for defamation. As noted earlier, it occurred to me the Whale Oil campaign was possibly carried out as a commercial arrangement (a theory also advanced by the businessman, see: Target of Cameron Slater’s ‘campaign’ speaks up), or as self-publicity — to raise profile and advertising revenue for the website (this possible motivation evinced by new banner ads at the time: “Be here as all hell breaks loose / advertise>>”), or as a public service. But these are matters for a later discussion and, it seems, due to be canvassed in court.

Facts are stated to the best of my knowledge and commentary is my honest opinion. Corrections or clarifications are always welcome by email. Comments are open. [Please don’t be silly enough to think any of what you read above is a substitute for your own legal advice.]
– Best wishes, Peter Aranyi © 2014 All rights reserved.