Check. Check. One, two, three, four. Is this thing ON?

Hello readers, I logged in last night (yeah, it’s been a while) to mark THE END of the landmark legal case, Jordan Williams v Colin Craig, which (gulp) reached The Supreme Court, in which New Zealand’s most-defamed man was suing the politician he set out to destroy, for punching back.
It ended quietly, and thank goodness for all of us, it’s over. (Or is it?)
Anyway, that post is still coming; but in the meantime, something else caught my attention:

Hey. there’s no harm in posting this on the internet. This is just ‘a joke’, eh? 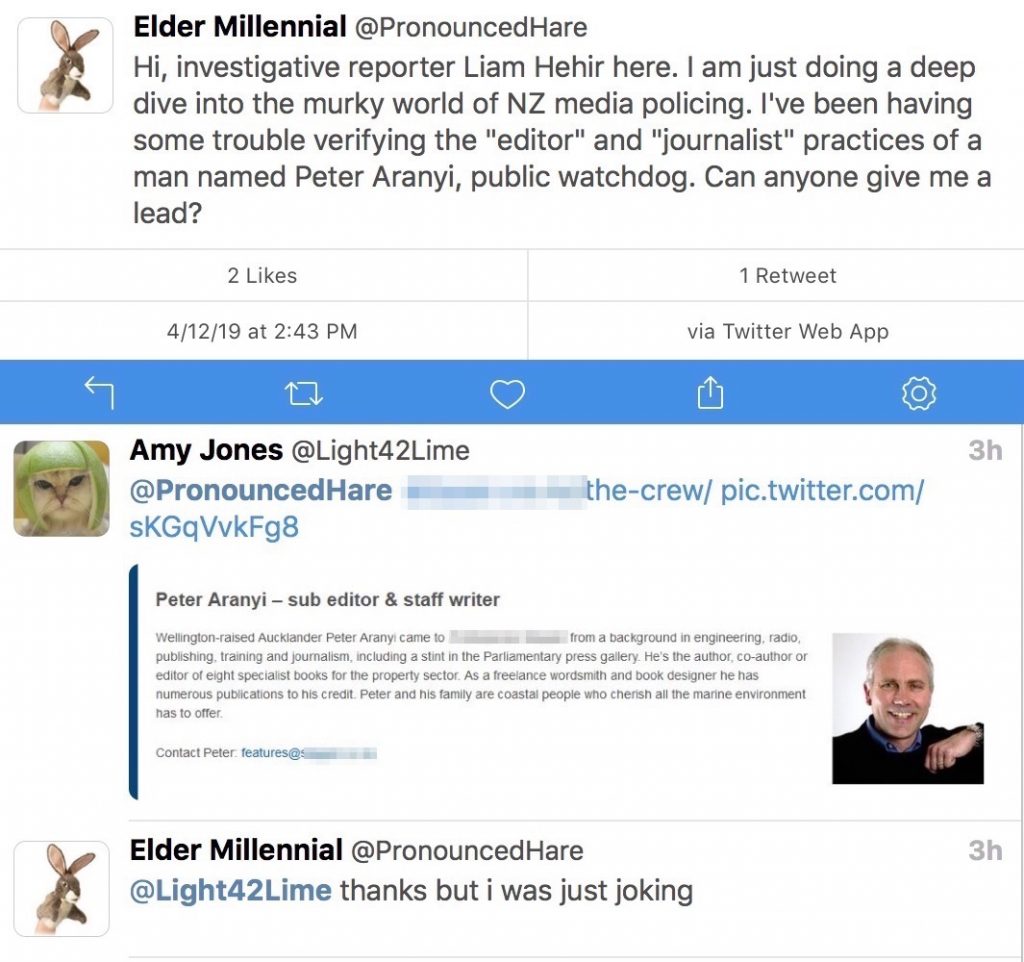 One good ‘joke’ deserves another, a few days later…

Cameron Slater used to pull this shit. He’d fall into a disagreement with somebody online then try to reach into their offline life, or direct his ‘Whale Army’ idiot trolls to go after the person — looking for ‘dirt’ and, if possible, seeking to disrupt their employment or private life etc. Slater, with typical braggadocio and delusion would sometimes bray NFWAB (‘Never Fuck With A Blogger’). Look where that got him, eh? See: Bankrupt blogger Cameron Slater carried out ‘character assassination’ – ordered to pay $70,000 in landmark media ruling (NZ Herald).

I expected better from Liam Hehir, a lawyer who moonlights as a social conservative (i.e. religious right) essayist. Liam used to write a newspaper column and still does for a few websites as well as the ‘Maxim Institute’. That’s an activist Evangelical Christian lobby group disguised as a ‘think tank’ which apparently sources its ‘thinks’ from equally opaquely-named North American-based activist conservative/Christian groups like ‘The Heritage Foundation’ which can be seen as part of what we used to call The Moral Majority. In turn, Maxim can be seen as seeking to promote here in New Zealand what one observer calls ‘American-style religion-based politics’.

The Maxim Institute is still living down various plagiarism scandals from quite a while ago, and (earlier this year) one of its senior figures being caught in the act using a false name in his ‘letters to the editor’ campaign (like, multiple editors, multiple newspapers – see below) against a proposed referendum on assisted suicide for terminally-ill patients. This was, I think aptly described as ‘a particularly devious tactic‘ at the time by the newspaper columnist who uncovered it, Martin Hanson, writing in The Gisborne Times.

Religious dogma cuts very little ice with most people, so they [the Christian activists opposed to euthanasia] have to devise an alternative strategy to avoid any mention of their real motive.
To put it mildly, concocting non-religious arguments has proved challenging, not least, for truth.
A particularly devious tactic has recently come to light in the newspapers. A certain “Stephen Francis” has written letters to The Dominion Post, The Gisborne Herald, The Southland Times, Hawke’s Bay Today, Rodney Times, The Northland Age and most recently The Whanganui Chronicle, all arguing against David Seymour’s End of Life Choice bill.

Anyway, no big thing, OK? but Liam and I fell out on Twitter (hey, it happens. It’s Twitter) over what I saw as a lack of proper disclosure of his roles for the National Party, specifically his work as the electorate chair for the party in Palmerston North some years ago. Look, I’d read and enjoyed maybe half a dozen of his essays and somehow escaped knowing that.

The Spinoff website prominently posted a disclosure (his disclosure) on a recent typically entertaining article by Liam about a 17 year old schoolboy being selected as the National Party candidate for Palmerston North. 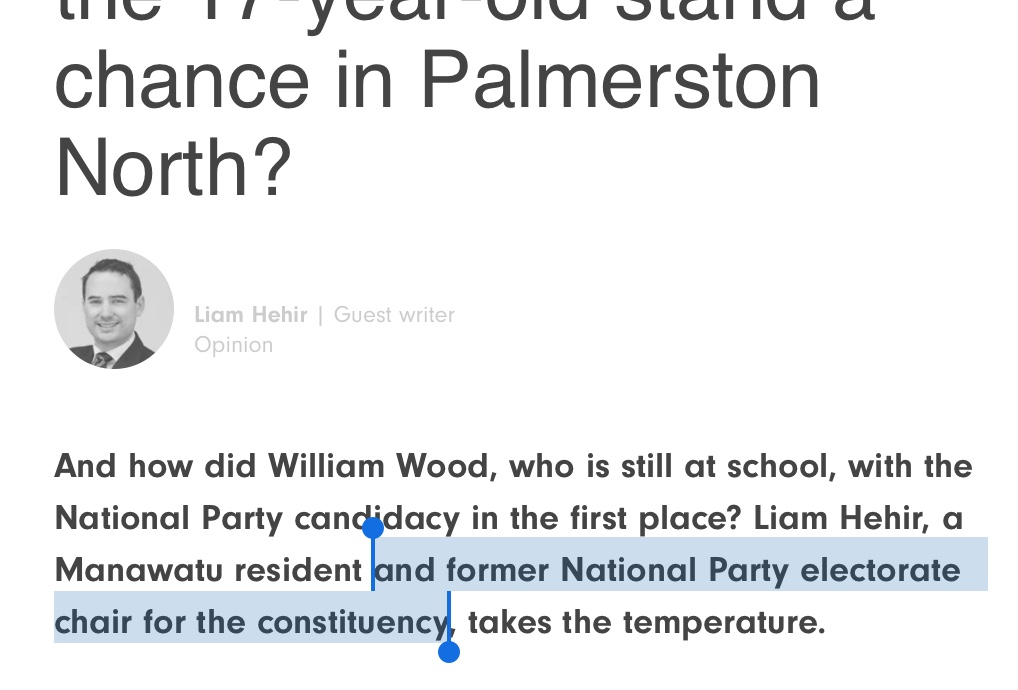 Credit to The Spinoff for, I guess, turning Liam’s throwaway disclosure into part of the lead on his ‘opinion’ column, eh? Good on them. But that disclosure surprised me and I said so: 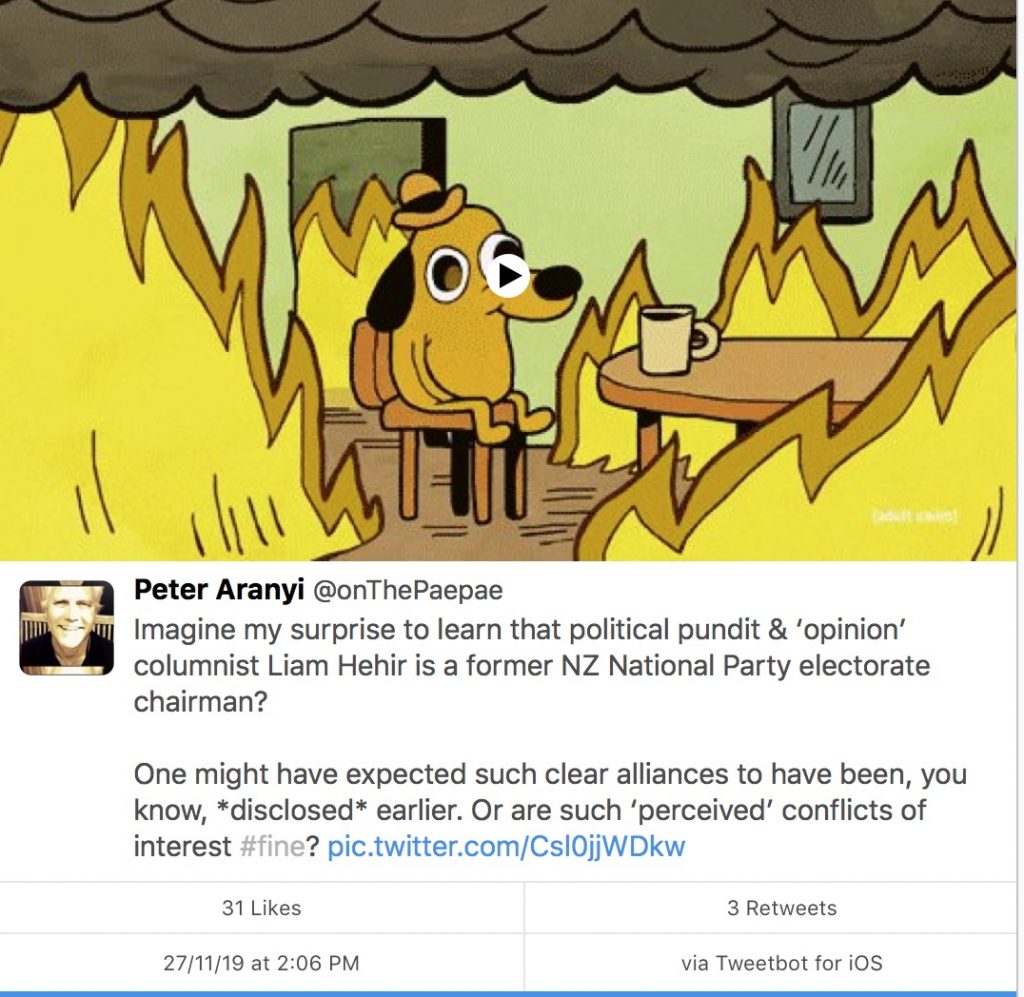 After a bit of shrill argy bargy – which saw Liam rotate through various defensive postures – and, to be fair, also produce examples of some what I would call (and did call) pretty satisfactory disclosures appearing on some of his writing online, that I hadn’t seen, things might have looked settled.

At which stage I foolishly inflamed the situation by telling him, “Yep, that seems reasonable” (I know, right? Tsk) – and also asked specifically about the electorate chair thing. Liam reverted to an online bully type (having a bad day? Dunno). In a series of hot posts on Twitter over a few days, Liam accused me of being, variously, a ‘very foolish man’ with ‘a weird obsession’ and an ‘ongoing case of paranoia’ engaged in ‘asinine tweeting’… there’s more, but, well, you get the picture.

This behaviour, this volcanic response to questioning/criticism is, of course, reminiscent of the abusive bully-boy Cameron Slater. (Remember him calling both me and Andrew Geddis ‘sanctimonious twats’? Good times.)

Liam reckoned he had previously disclosed his political alliances, maybe not specifically the electorate chair role (really, the revelation that set off this wee fracas), and indicated that his work for the National Party had all been declared and published in the Manawatu Standard way back when he started writing for that paper (2013 or 2104, I think) and ‘repeatedly’ since. Bokay.

Someone who claimed to be the editor who commissioned him back in the day popped up on Twitter (I take him at his word, naturally) and said Yes, Peter, all that had been disclosed at the time in the Manawatu Standard. When I asked him about specifically the electorate chair role that had so surprised me to learn about, he said Yes, Peter, that too had been disclosed. Cool. Case closed? I web-searched, asked him or Liam to find any link to it, or to anything that mentioned ‘electorate chair’, if possible (yeah, I know that can be challenging) but, Yes, Peter, we have no bananas.

Now with all due respect, let’s accept that all happened, but we just can’t find it now.

What good do five year old disclosures published in the Manawatu Standard do me or anyone reading Liam’s political essays now? Especially if they’re not online now. How does that justify their absence in some (not all, I grant you, happily) of his political commentary essays,  like on stuff?

But hey, we can see that differently, agree to disagree (as John Drinnan would oh-so-fatuously say) and move on, right?

A small band of ‘pseudonymous trolls’ sprang to Liam’s defence, well, really, to my attack, taking a cue from Liam and smearing me as somehow deranged or acting in bad-faith for daring to see this disclosure thing differently.

Now, I don’t do anonymous commentary on the internet, as we have discussed here before; and Liam kinda-sorta has his name attached to his twitter account too. But it seems the people who sprang up to tell me I was an idiot, smoking meth(!), etc. etc. mostly preferred to do so under pen names.

There was a chilling dose from one pseudonymous guy – who turned out to be the communications manager for the scandal-soaked, deceitful-in-some-people’s-eyes ‘Maxim Institute’ that Liam writes for – who invoked a (totally fictional) image of me stalking a female TV personality to ‘berate’ her outside her apartment. Gee, very quick to smear, for a god-fearing Christian propagandist, eh? Safe behind his little pseudonym. He wasn’t the only one.

Anyway, sorry, this has already gone on too long with all this background for the simple point I wanted to make, which is illustrated in those two tweets by Liam Hehir highlighted above.

Please email me all of your dirt on Peter Aranyi

Hi, investigative reporter Liam Hehir here. I am just doing a deep dive into the murky world of NZ media policing. I’ve been having some trouble verifying the “editor” and “journalist” practices of a man named Peter Aranyi, public watchdog. Can anyone give me a lead?

That a partner in a law firm would publicly profess to “having some trouble verifying” my work history in journalism and editing seems unlikely. No, of course he wasn’t “having trouble”. So, is he a liar? Or was this rhetoric? Hmmm.

Try the National Library website maybe, Liam? Or even a fairly generic web search quickly shows up a potted bio online from one of the magazines I’ve been working with as an editor and feature writer for the last five years or so – which one of his helpful Twitter followers screenshotted and posted in Liam’s timeline.
And there it was: the Cameron Slater-esque ‘NFWAB’ bullying.

Liam wasn’t genuinely asking for help to ‘research’ me. No, I think he was trying to create a collision between an online critic’s argument and their real world employment. Trying to ‘out’ them, hurt them, shut them down, silence them. To bully them.

It surprised me and genuinely disappointed me to see Liam Hehir stoop to that.

As I said, I had really thought better of him.

Facts are stated to the best of my knowledge and commentary is my honest opinion. Corrections or clarifications (or apologies, Liam) are always welcome by email. Comments are open, but may be moderated.
– Best wishes, Peter Aranyi