« Some people use this as a checklist, some as a menu
Social engineering! »

Orchestrating smear campaigns against your rivals is seen as dodgy in business, so what about politics? 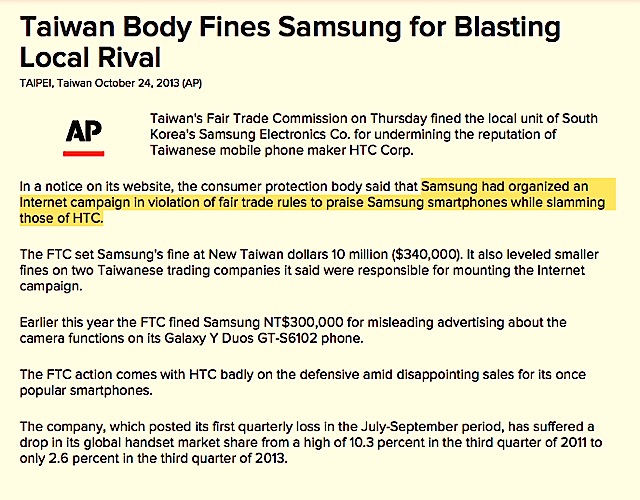 South Korean cellphone manufacturer Samsung has been censured and fined for organising a campaign to denigrate one of its competitors by paying for derogatory comments to be posted on the internet.

According to a finding by Taiwan’s Fair Trade Commission Samsung paid contractors to pose as cellphone users and post comments which attacked rival HTC’s products and boosted its own. The consumer protection body found that Samsung had deliberately acted to undermine its rival’s reputation and fined Samsung US$340,000.

Pretty scummy and unethical behaviour by Samsung. That’s not normal business practice, is it?

In a related zone, it’s been intriguing to hear how others have reacted to attack dog Cameron Slater expressing his deeply cynical views of politics, in discussion about his online campaign to discredit Auckland Mayor Len Brown:

Yeah, well, not surprising. I’ve commented before how the wonky tribalism that Cameron Slater and his ilk are imbued with seeks to justify their own team’s nasty attack politics and dodgy tactics by chanting (like japa beads) and reciting all the ‘dirty tricks’ they imagine their rivals have played on them.

Trust me, these types really do sit around saying ‘The [fill-in-the-gap] Party is sooo dirty!’ … and hatching schemes to use dirty tricks against them. Clearly, this bitter, hallucination-driven ‘activism’ (retch) is not confined to any ‘side’ of politics.

But something about Cameron’s attention-seeking loutishness and his apparent willingness to stoop lower and engage in ugly, protracted character assassination gives him a profile — which he’s entitled to. He’s earned it. Some I know working in the media regard Cameron Slater as a sycophant or a performing seal. Some just despise him.

Cameron himself seems to imagine he’s regarded as a ‘political commentator’, at times running an Avenging Angel/harbinger of doom schtick against his and his dad’s ‘enemies’ and what he sees as the left-wing media — the very same media some lefties perceive as ‘in the tank’ for the right wing. (Yeah, I know.)

A striking dissonance, and failure to close a small mental gap, was on display when Cameron Slater was interviewed by The Nation‘s Rachel Smalley about his involvement, awareness (or otherwise) in a ‘right wing plot’ to force Len Brown’s resignation or discredit/destroy him by the revelations of his affair.

Listen to Cameron’s wimper of outrage at a suggestion that he has been involved in such a plot (OMG!) then, just a few minutes later in the same interview, as he let slip his (deranged-sounding) mindset about the ‘despicable people’ involved in NZ politics ‘at all levels’.

I guess that includes his father John Slater, former President of the National Party and John Palino’s campaign manager, his mate Simon Lusk, who offers behind-the-scenes political campaign advice to National wannabe-MPs and other gadflies like lobbyist and anti-MMP ‘campaigner’ Jordan Williams, but I may be misunderstanding his point. Maybe he doesn’t mean his people.

Cameron’s views aren’t new. He’s expressed similar sentiments to me in person. But, personally, I think he’s out to lunch. It’s easy to be negative. His cynicism isn’t an accurate reflection of the many worthy people (paid or volunteers) who put their time and money, their heart and soul into trying to make positive changes (as they see it) through their involvement in a political organisation, whether on the ‘left’ or ‘right’.

I’m not one of them (I’m not a joiner, as I have said before), but I’ve met enough good, sincere people in politics — on all sides, at all levels — to recognise the idiocy of Cameron’s comments. By demeaning people involved in politics in this way, reducing them to cardboard cutouts, it seems to me Cameron Slater seeks to make his own extreme, dubious (“dirty, disgusting, despicable”) behaviour somehow less remarkable.

‘Everybody does it’ is such an adolescent excuse.

On the other hand, for an erudite and spellbinding discussion about the ‘failure’ and irrelevance of modern democratic politics, (‘the lies, treachery and deceit of the political elite’) watch this fascinating interview between the BBC’s Jeremy Paxman and writer/actor Russell Brand: