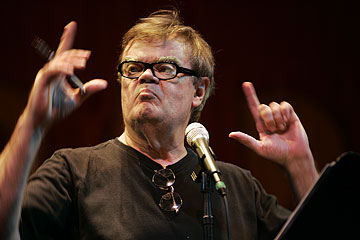 Petulance and the Prize

Evidently some people were disappointed that Dick Cheney didn’t receive the Nobel Peace Prize, and believe me, I sympathize — I thought Philip Roth should’ve gotten the literature prize instead of that grumpy Romanian lady with the severe hair — but it was Mr. Obama whom the Norwegians wanted to come visit Oslo in December and stand on the balcony of the Grand Hotel and wave to the crowd along Karl Johans Gate, and, face it, Mr. Obama is going to draw a bigger crowd than Mr. Cheney would have. When a man has shot somebody in the face with a shotgun, people are going to be reluctant to line up en masse in his presence lest he get excited again.

From his loooong opening sentence (above) to this wonderful quote:

The wailing and gnashing of teeth that you hear among Republicans is 68 percent envy and 32 percent sour grapes. Here is an idealistic, articulate young president who is enormously popular everywhere in the world except in the states of the Confederacy, and here sit the 28 percent of the American people who still thought Mr. Bush was doing a heckuva job at the end, gnashing their teeth, hoping and praying for something horrible to happen such as an infestation of locusts or the disappearance of the sun, something to make the president look bad, which is not a good place for a political party to be, hoping for the country to slide into chaos.

… this stuff is priceless. Read it all at NYTimes.com

I ‘heart’ Garrison Keillor. Wow. Seriously. Bless him.
Thanks to the global reach of iTunes and podcasts of his Prairie Home Companion we in my family are exposed to his humour and wisdom (and the positive life-force he seems to give out so readily) on his show on a more regular basis then when we would hear it on the car radio driving slowly home from the beach house.

What a neat guy. What a pro. What a good way of expressing himself. I admire him.

You can read an interesting Honolulu Star Bulletin profile on him here.

Thanks to John Gruber for pointing to the NY Times piece. I also agreed with Gruber when he said this:

To any American who isn’t happy about our president having won the Nobel Peace Prize: There is something wrong with you.

(Just so we know where I’m coming from on this point.)