What you say ‘No’ to

Sometimes the ‘opportunity’ isn’t worth the cost. 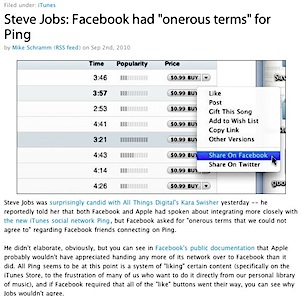 … both Facebook and Apple had spoken about integrating more closely with the new iTunes social network Ping, but Facebook asked for “onerous terms that we could not agree to” regarding Facebook friends connecting on Ping.
— Steve Jobs via TUAW The Unofficial Apple Weblog

Yeah, I know what he means.

Years ago, one of my best friends saved me from overpaying for a property deal that I had become slightly besotted with during negotiations (the thrill of the chase) — by pointing out that my language wasn’t helping me.

I had said, out loud: ‘I just want to get a deal with these people’ (meaning the sellers).
Mike pulled me up and said, ‘Whoa, Peter, whoa. You don’t just want to “get a deal”. You want to get an excellent deal.’ I stopped and thought: ‘Yes, that’s right.’ And walked away. (It was an important lesson. Not every deal is worth pursuing.) Walking away if the price was too high was the best move at that time, just as Apple decided with Facebook.

On a related thought, over the years I’ve frequently had invitations to co-operate or form an alliance with people and businesses which, although they might have appeared to share some outward similarities with us, weren’t a ‘match’ in crucial areas. Our values, predominantly. (Oops, choir boy/high horse alert! ;-))

Sure, there can be money on the table (sometimes actually quite a lot of money — like in the recent case of some friendly Gold Coast property developers who approached us looking for buyers). And sure, there might be some commonality of interest.

In that example, we might have made some quick bucks by shepherding people who trust us towards those hungry developers, or by ‘endorsing’ their ‘investment opportunity’ in some marketing — but it would have meant disengaging something important about how we operate.
That’s giving away too much, in my view.

I’d rather be trusted.

A more trivial example is the sense one sometimes gets when receiving, say, offers of insurance from your bank or from a credit card company — you know they’ve just pimped their “list” to another business … personally, I don’t like that.

As actor Harvey Keitel says* in a beer advertisement (and I agree):

What you say ‘No’ to will always define you.
.

(* Did someone else say it before?)