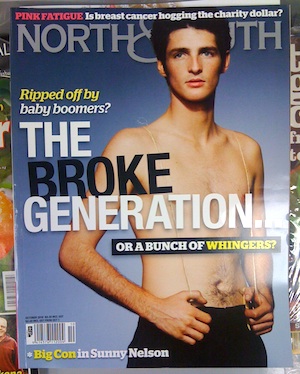 The cover of the current North & South magazine features a young bloke wearing Jed Clampett-inspired depression couture with the headline:

Ripped off by baby boomers? / The Broke Generation / or a bunch of wingers?

I haven’t read the article yet, but it probably has some roots in the same ideas Bernard Hickey promulgated with his open letter to Gen X & Y (avec wailing and rending of clothes)… after the June 2009 (yes, 2009) Budget: Leave the country as soon as possible

Now, I know any defence of ‘existing privilege’ makes the defender — by definition — a Conservative — a Tory. I know that. It’s not how I see myself, but if you do, well, I guess I’m fair game.

But the argument that Bernard proffers in ‘Leave ASAP’ i.e.

… misses a few points, in my view, is redolent of something akin to schadenfreude, and even approaches wishing a pox on the houses of the baby-boomers. Here’s why.

(1) Is it stoopid of me to say that earlier generations also struggled financially and (shock, horror!) went without to save up for their first house? I recall the saving programme (remember those? And not just for your trip to Noosa?) my wife and I undertook to accumulate $30,000 deposit to buy our first little house at $175,000. (OK, the numbers are going to sound kookie, these days, but what the hell).

(2) Does it mark me out as an out-of-touch curmudgeon (careful how you answer!) to say I observe a lot of young people seem to want to start on the property ladder a fair way up?

Some seem to want to jump on where their parents are now … ‘essentials’: two cars, leather lounge suite, flat panel screen, sky TV his & her iPhones and broadband internet etc plus a lot of ‘buy now pay later’ debt …

Gee, maybe it’s THAT devil may care consumerist behaviour that is pushing home ownership out of their reach … and not some mythical greedy baby boomer intergenerational ‘conspiracy’.

(3) Some are doing it. I met a young couple (early 20s) at an engagement party recently and was shocked — horrified, actually — at the amount of their mortgage. (Yeah, I asked them. Nosey? Who me?) It is astronomical, but that couple told me they wanted to live in a desirable suburb near the inner city, and not in a ticky-tacky box in a far-off ‘nappy valley’, (to use Olly Newland’s phrase)… and they were prepared to pay in the short term.

This was an above-average earning couple, to be sure, and with their heads screwed on. And they were pretty confident, well, reasonably confident based on history, that if the debt got unmanageable or if ‘they’ got pregnant, they could sell their desirable, leafy-suburb house for something like its (fairly stable) value.

But let me tell you, with the amount they were paying in mortgage repayments, there’s no doubt in my mind that this plucky, optimistic couple are already ‘doing without’ in a pretty significant way, and not wasting money … more strength to them.

Surprise! Not everyone believes the wailing refrain of the oh-my-god-things-will-never-be-the-same-again-after-the-credit-crunch-global-financial-crisis-worldwide-recession brigade. Some people think there’ll be a blowout of some sort, and even a long recession, but not ‘financial armageddon’ … and that investments in property still look like a good bet, as they have done for (ahem) previous generations.