I wish I could express the same shock and astonishment at the allegations of sexual coercion by the leader of a religious sect that Destiny Church’s Bishop Brian Tamaki does (“Sex claim against mate stuns Bishop Tamaki”).

Like many others I’m sure, the news that a persuasive ‘spiritual’ figure is being accused of multiple cases of using power and religious mumbo-jumbo justifications for his predatory sexual behaviour filled me with: ‘So what’s new?’

If that’s true about Bishop Eddie Long, how shameful — but sadly a case of same-old-same-old, business-as-usual. At least the Pope has had the grace to fulsomely apologise for generations of sexual abuse by Catholic priests recently. His own role in allegedly ‘enabling’ repetitive abuse by sitting on complaints is yet to work its way into the light, it seems. 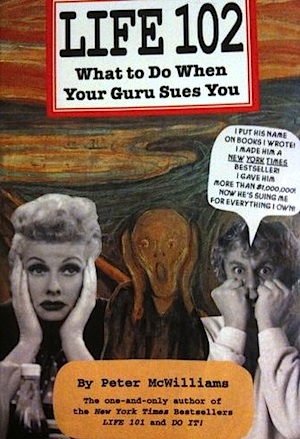 I recall reading Peter McWilliams’ book Life 102: What to Do When Your Guru Sues You when it was originally published … and in it reading his gut-wrenching allegations against the ‘guru’/leader of MSIA John-Roger (Roger Delano Hinkins) … allegations which could be categorised as the same style as those against Bishop Eddie Long — grooming young men in the ‘church’ for sexual favours.

What is it a about these cults and churches? They attract needy people, with their ‘God-shaped hole’, ‘turn your life around’, ‘join God’s holy flock’ schtick and, it seems in so many cases, there are abuses of power. Sometimes it’s financial (fleecing the flock) or sometimes it’s sexual exploitation of vulnerability, and then dark shameful agonising secrets.

Now, fair’s fair: it’s not just religious charlatans. Sexual abuse is rife … we read the same accusations of power abuse now and then against employers, politicians, medical doctors, psychologists, even a recent case of a carer in an old peoples’ home … there’s a predatory sexual urge in some which is disturbing.

One of the best ethics statements I’ve read is the one published by a group I’ve had some dealings with in the Men’s Movement: The ManKind Project.
Take a look:

This ethics policy grows out of the core values of The ManKind Project International: accountability, authenticity, compassion, generosity, integrity, leadership, multicultural awareness, and respect. I agree to integrate these values into my life by honoring the intent of this document.

I COMMIT THAT I WILL NOT EXPLOIT ANOTHER PERSON’S VULNERABILITY.

This means that:
I acknowledge that a relationship may be exploitative when I take advantage of my position or experience within the ManKind Project International to influence another for my gain, particularly if I know that person to be vulnerable at the time. I understand that exploitation may occur at any time, and a person may be more vulnerable to exploitation shortly after initiation.

As a member of the ManKind Project International I commit that I will not participate in any financial, business, therapeutic, or sexual relationship that a reasonable person would consider to be exploitative.

If at any time I believe my actions might be exploitative, or if I have been challenged about my behavior, I will consult those I trust to challenge that behavior and my underlying motivations.

I am accountable for my actions, and I am willing to be held accountable by my Center and ManKind Project International. If I believe someone has exploited another’s vulnerability, I will hold him accountable.

If a peer review is conducted and I am judged to have exploited another’s vulnerability, I agree that consequences within the ManKind Project International Community may be imposed.

As a member of the ManKind Project International I agree to abide by this Policy.

There’s a lot to like about that statement of intent. (You can download a FULL copy here PDF 16k.)

I personally like the recognition that people are at times vulnerable to exploitation, especially on being introduced to an ‘awakening’ of some kind.

I like this: “I am accountable for my actions, and I am willing to be held accountable…” and I like the commitment members make to blow the whistle on dubious behaviour/wrongdoing as you see it: “If I believe someone has exploited another’s vulnerability, I will hold him accountable.”

Now obviously having a fine-sounding, high-worded ‘policy’ in place isn’t going to prevent exploitation but (like the joke about a dozen lawyers at the bottom of a swimming pool) it’s a good start!

At the very least this organisation is telling its members (ALL its members) explicity, in plain language what potential issues can arise and what the expectations are — ethical behaviour, accountability, and a community of peers watching out for the well-being of others in the group.

Any thoughts about this?