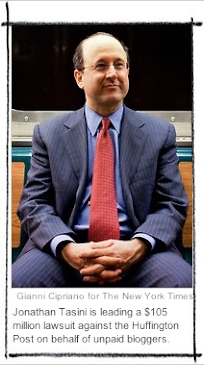 Remember when Arianna Huffington and her co-owners sold The Huffington Post to AOL for $315 million?
And remember how some of those who blogged and contributed to the site out of a sort of collective, we’re a left-wing blog in a world of right-wing media altrusim felt a bit let down? Like the last thing they expected was a sale of ‘their’ content to a fat cat corporate — it looked cynical to them …and sparked a dissonance expressed as: ‘We’d write for free for Arianna, but not AOL.

I can’t be the only one who thought, ‘Gee, Arianna has really schmoozed those guys; telling them what they wanted to hear to get them on board, then selling the baby’.

Well, it’s moved further with a class action lawsuit initiated by one of those bloggers, Jonathan Tasini — sparking a scathing and, forgive me, rather nasty attempted riposte from Ms Huffington (she sounds pissed-off to me) … but, I have to say a very un-hysterical and measured reply in return from Mr Tasini which includes this:

There is little doubt that unjust enrichment has taken place. In society, our law tries to reflect our moral values, and vice versa. The thousands of bloggers created the value of the Huffington Post. Arianna Huffington created a tiny piece of that value—but she has declared that she, and only she, should benefit from the value of the sale to AOL.
I have no idea whether we will win the legal case. Judges do what they will do. It is a novel argument—as was the legal argument at the heart of the case I brought against The New York Times in 1993, which we won in the U.S. Supreme Court in 2001 …. At the time, many pundits or “observers” opined that we had no chance. So, I suggest we all take the opinions of various people with a healthy dose of skepticism, or, at least, a “wait and see” attitude.
But, this is the reason I have said to the blogger community—to the dozens of people who have already written and called asking to be part of the effort (including insiders who are sharing more information to strengthen our case)—that the machinations in court are a small piece of what we must do. This is really not about Ms. Huffington; she will be a forgotten “brand” when the next new fad appears. 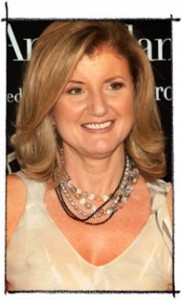 So, yes, I’m willing to easily believe Arianna Huffington is a chameleon. (I think that’s been established, already. Maybe it’s the secret of her success?) I personally believe that if needs be, Arianna could/would assume the role of a poser who would whisper all the right things in the right ears to get people onside, boosting her site’s fortunes along the way. But equally there’s no doubt that her venture was a capitalist gamble — one that was losing money for a while, and one that’s paid off for those who put (ahem) capital at risk. Including (naturally) Ms Huffington.

It’s understandable why people like Jonathan Tasini and other ‘contributors’ who did some of the heavy lifting as far as creating buzz and attracting influential audiences and stablemates in the early days are now gagging on her ‘Oh but you should be soooo happy for the exposure darling … just ignore me while I go to the bank ka-ching! line of reasoning. It’s the call girl principle (‘the value of a given service is greatly diminished once that service has been rendered’ — harsh but true.)

That was then, this is now, Mr Tasini and others. Don’t hate her because she’s showing up as a changeling. Welcome to the world of Capitalism, bloggers. The tough reality is: those who own or control the means of production will usually reap the benefits.

Will this class-action lawsuit succeed? Too soon to say. Partly it will depend on how overt Arianna’s ‘join us in building something wonderful’ schmooz can be shown to be. But it deserves a hearing, I think. I know others disagree with me.

For my part, I must confess to considerable disappointment with how HuffPo has ‘progressed’ from its left wing media/political/blogger/citizen journalism roots to its role today as a shameless populist profoundly parasitic aggregator offering a far more mainstream fare of breathless celebrity gossip (e.g. Whose daughter is this? Who wore this dress better?) Is-our-food-making-us-fat? Wardrobe malfunction-chasing tabloid bullshit that seems to be (dammit) be working for them… weeeell, long enough for the sale to AOL. And at what cost? It’s their sandpit, their rules, I have said elsewhere.

(‘Parasitic’ is a dangerous word for a blogger like me to chuck around, I admit it. I also acknowledge they have hired news professionals by the gallon, including top talent-poaching from MSM like the NY Times, and it’s true that HuffPo generates ‘news’ of their own …and some of it’s pretty darn good. Jason Linkins for instance is very good.

But overall The Huffington Post has become notorious for pimping their headlines and ‘optimising’ for Search Engine links. It does this at the expense of its credibility sometimes, in my opinion. Remember the embarrassing letdown of  ‘What time does the superbowl start?’ Jeez, Wayne.

Hey, I actually find part of myself hoping Tasini is right and that the AOL version HuffPo sinks under its own cynical and fatuous weight and fades like a fad. They’re certainly nothing like the fresh and powerful entity they were during the last US election which is when I started following them for their coverage of the Obama-Clinton race and then Obama-McCain. That addiction to empty calorie ‘tabloidism’, as well as Arianna Huffington’s pillow talk to the bloggers she now apparently feels she can do without and owes nothing to because they should be ‘grateful for the exposure’ makes me care less about them.

Will a new and lean uber-connected political blog like the old Huffington Post appear to take the AOL one’s place? Gee, you know, I hope so. I’m sick of tripping over the adorable kittens padding out the stuff I’m interested in.