« Not an endorsement. Not product placement. Just what they use: Apple.
Let a little air in, @BarnsleyBill » 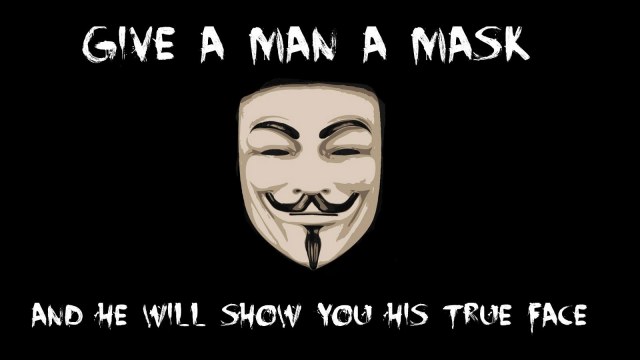 We’ve talked about sock puppets before, most recently in the context of someone maliciously impersonating journalist David Fisher on Twitter. In my limited experience, often such bogus people have commercial reasons for not disclosing their identities, or pretending to be someone else in ‘discussion’ (cough) on the internet.

One of the most striking I observed was property spruiker Sean Wood pretending to be his own satisfied customer, ‘Muffit’, protesting at criticism of Mr Wood’s marketing on the PropertyTalk discussion forum. (See: Thoughts about authenticity – Sean Wood and Steve Goodey enterprises and Is it worth dishonestly defending a reputation? No.)

In addition to last month’s David Fisher impostor, I recently engaged in conversation with another sock puppet, this one calling himself/herself/themselves Barnsley Bill. ‘Bill’ muddies the waters even further … by simultaneously claiming he’s never hidden his identity (?) as someone called Russell Beaumont and also asserting joint/rotating authorship. How novel.

We briefly talked about, funnily enough, the quality of comment at left wing blogsite The Standard and then I thought I’d ask him who he was … (read the conversation here at Storify if the script below fails to load or elegantly display in your web browser.)

Before I’m accused of it, let me disclaim any ‘anguish’ about this. Yes, in my personal opinion, he/she/they seem to be being less than honest. I don’t find such behaviour endearing. In fact, it’s typical of the kind of phantom social media profile, fake grassroots, psy-op dark arts bullshit people who fancy themselves as political geniuses or ‘back room operators’. Legends in their own lunchbox, most of them.

Mainly for their own amusement, it seems such adolescents engage in time-wasting smokescreens.

Well … whatever floats your boat, boys, but while you’re telling lies like this, don’t bother hassling anyone else for a lack of integrity. Or hypocrisy.

Oh dear. What does it say about you when you claim to be 'the representative of the cabal' behind a fake Twitter account? Not much. (source: Cameron Slater)

I wonder if the masturbatory collective which makes up the self-proclaimed ‘cabal’ responsible for the fake David Fisher Twitter account encompasses the same group behind the ‘Barnsley Bill’ fake profile? It seems possible, if not likely.

If that is the case, the overt denial of knowledge contained in this reply from ‘Not Russell Beaumont at the moment’ would be, I assume, just more disinformation: 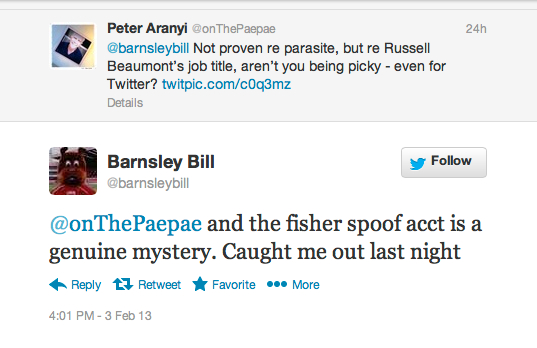 Twisted. But ‘not-currently-Russell Beaumont’ makes one of my points for me about the parasitic impersonation of David Fisher: By so closely mimicking the real David Fisher’s Twitter profile the ‘cabal’ deceives people. Why, even apparently confusing Slater/NZ Truth insiders like ‘sometimes-Russell-Beaumont-sometimes-not-Russell-Beaumont’ who are, I presume, supposed to be in on the ‘joke’.

Dumb and dishonest, it seems to me. And lacking authenticity.