Let a little air in, @BarnsleyBill 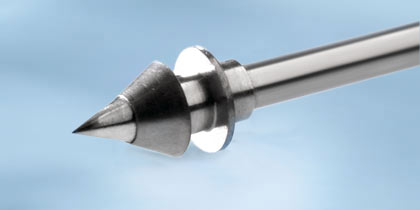 This evil-looking device (right) is a Trocar self-piercing ventilation tube, used in medical procedures where inserting one of these into a patient’s infected body will help save their life through ‘aeration’ or by helping with ‘drainage of secretions’.

I bet inserting one of these hurts like hell. But it beats suffocating … or festering in toxic septicity.

I got thinking about this today when I received a toxic message, with threats, from someone claiming to be Russell Beaumont in response to my post: The dissatisfying hollowness of @BarnsleyBill, Russell Beaumont’s internet impostor.

The reply is a bit fraught so I’ll summarise and paraphrase it:

Ouch! Stop that. You are so HORRIBLE! I’m warning you: Cut it out.
— reader ‘Russell Beaumont’ (paraphrased)

The full Ode to The Paepae comes complete with bonus personal insults (some apparently his and some he claims are from Cameron Slater). Parts of it resemble a peeing competition.

‘Russell’ also lays out what he calls his “firm belief” (given my experience as a journalist, they appear to me to be hallucinations) about the New Zealand Herald‘s coverage of some recent news events … and he intimates legal action against me may follow should I ‘go further’:

I would caution you against going further with your accusations as my reputation is worth (to me) getting a lawyer involved and unlike most who infect the fringes of the NZ web space I have the means and sufficient levels of spitefulness to in fact do this.

Look, if the message I received really is from Russell Beaumont (and not the collective “one of three or four other people” apparently running his Twitter account) he claims a long history as an internet, um … presence (“since the newsgroup days”) using his BarnsleyBill handle.

Here’s the crux of it: We see THIS differently:

A year or two ago I “lent” the persona to some friends who were interested in blogging as my own enthusiasm began to wane.

Is that kinda like letting someone use your drivers licence?

That seems to tally with what the @BarnsleyBill sockpuppet told me yesterday: @BarnsleyBill is not ‘currently’ Russell Beaumont. In which case, speaking personally, that transaction strikes me as misleading. You may see it differently.

It’s also striking to me that my correspondent seems to admit he lacked the courage to comment on the internet in his own name — or, perhaps, to so self-moderate his comments that they wouldn’t injure his reputation(?) — then passed his pseudonymous free-wheeling ‘persona’ on to other people to operate …

…and now ‘Russell Beaumont’ seeks to shut me up?

PS Russell (if it really is you) consider perhaps that it’s less ‘effort’ for me to ‘think and write’ than you imagine.