« Oh Craig, where are you when I need you?
That was ‘not intended to be a factual statement’ »

Is it worth dishonestly defending a reputation? No.

‘Every saint has a past and every sinner has a future.’ – Oscar Wilde
.

Reputations — good and bad — are a topic we discuss here at thePaepae.com from time to time. I’m interested in hearing what you think about it (…if anything). 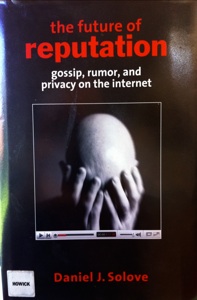 Newspapers used to turn into fish and chip paper or crumble to dust... what do old blogs do?

Watching the chickens coming home to roost on some of the spruikers who grace these pages from time to time, I can’t help but be struck by the natural consequences (‘just desserts’?) of a ‘bad’ track record or reputation. We each gain the reputation we deserve, eventually.

‘Reputation is built up over time. It can be built up negatively and positively’ said researcher Danah Boyd in response to Google’s Eric Schmidt’s (half-serious?) suggestion that changing your name would be the only way to distance yourself from your past.

“I don’t believe society understands what happens when everything is available, knowable and recorded by everyone all the time,” Schmidt said.

While it can seem harsh seeing the hate campaigns that kick in sometimes against the public face of fallen businesses like failed finance companies, there is an element of ‘enforcing norms’ — and a deserved loss of reputation is part of that process.

I’ve just finished reading Daniel Solove’s book The Future of Reputation, which in part examines what he described as ‘the death and rebirth of shaming punishments’ — ‘internet shaming‘. Solove offers the thought that the internet is, in some ways, the modern equivalent of ye olde village stocks — where wrongdoers and those who breached society’s norms found themselves labelled, mocked, chastised and pilloried for their sins/actions against the community. (The very word pillory coming from the equipment used). 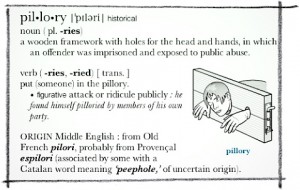 After discussing the erosion of privacy and spelling out the ‘virtues’ of internet shaming, Solove points to what he describes as a ‘vice’ — permanent branding effects:

Internet shaming creates an indelible blemish on a person’s identity. Being shamed in cyberspace is akin to being marked for life. … People acquire permanent digital baggage. They are unable to escape their past, which is forever etched into Google’s memory.

Well, hang on. That lines up with Schmidt, but seems a little dramatic. I discussed in my post Giving scumbags a second chance how sometimes the reputational damage to crooks and ratbags can actually be incomplete and short-lived — sometimes even suppressed, thus giving them the chance to, goddammit, learn the wrong ‘lessons’ from their mistakes, increase their crooked competence and get a second, more-refined, chance to ruin people’s lives. Sometimes they move to a new location to achieve that.

I personally try to steer clear of abuse and ‘condemnation’ of others. (Yeah, OK… ‘scumbag’. You got me.) I try to focus on their actions and claims, not their soul. There’s a distinction Solove discusses between ‘You have committed a bad act’ and ‘You are a defective type of person’. And I eschew invasions of privacy.

I am, however, when necessary, willing to name names. I do, and I will raise concerns, or pass comment (harshly where necessary) on ludicrous marketing claims or what I see as misleading behaviour by spruikers and others — actions which sometimes fall into the just-how-stupid-do-you-think-we-are? category. Liars earn our disrespect, I think. Is that internet shaming? Yeah? Well, OK.

Sadly, the adage: ‘There’s a sucker born every minute’ is surprisingly apt, a lot of the time.

I remember years ago watching Parkinson interview former journalist and late-in-life Christian convert Malcolm Muggeridge on TV. Muggeridge explained how he had, for years, taken comfort from the fact that lies printed in newspapers were crumbling to dust as the old newsprint disintegrated in basements and libraries — quietly implying he was responsible for some of those lies…

Then he related his growing horror that the old newspapers were being microfilmed — preserving them, and their lies, for later generations. (Parkinson, ever the interviewer, asked Muggeridge which of his own lies in particular he was worried about. Guffaw, guffaw.)

In my view (not just mine, clearly) the internet IS the future of reputation. Some of the news media articles about ratbags and scumbags deserve to follow them forever and that seems fair enough. Damn right.

Not to harp too much about this, but in my personal opinion, a fevered understanding of that idea is what was behind er, ‘personalities’ like Dean Letfus, Matthew Gilligan and others in the United Federation of Property Spruikers apparently putting such heat on discussion forum PropertyTalk last year. The spruikers wanted PT to ‘clean up’ (read: censor) comments on the forum and, tellingly, even remove past approved comments/discussion that ‘derided’ their marketing methods for Gilligan’s Sponge Bay and Perriam Cove subdivisions etc. [It kinda sorta worked.]

Mopping up the reputational damage

An understanding of these facts of life is behind people like Shaun Stenning‘s moves try to insert ‘non-disparagement’ clauses into every agreement they can, even into their email disclaimers…

*Disclaimer*
This email and any files transmitted with it are confidential and intended solely for the use of the addressee. If you have received this email in error please delete it and notify the sender immediately. If you are not the intended recipient, be advised that you have received this email in error and that any use, dissemination, forwarding, printing or copying of this email in any manner is strictly prohibited. Any views or opinions presented in this email are personal views of the author and do not necessarily represent those of Dollar Rose Holdings LTD (“Company”). Recipients must not make defamatory statements and infringe or authorise any infringement of copyright or any other legal right by email communications or other medium. The Company or the sender of this e-mail message is under no circumstances liable to any party for any direct or indirect consequences through any actions taken based on any information provided herein. Recipient should check this email and any attachments for the presence of viruses. Sender accepts no liability for any damage caused by any virus transmitted.

… and making removal of ‘negative’ feedback from the web ( … including but not limited to internet blogs … ) part of their demands for the wispy promise of a refund to dissatisfied customers.

Did you see that Eric Schmidt, while Google CEO, tried to get Google’s boffins to obscure his past political donations from the search engine results? That’s questionable if you ask me — and especially ironic given his ‘change your name’ advice… which is plain silly.

…even when folks have a negative reputation, they often don’t want to lose the positive reputation that they’ve built. Starting at zero can be a lot harder than starting with a mixed record. Most people who have bruises on their public reputation also have gold stars. Just look at various infamous people who have had their names dragged through the mud by the press. Many have been invited to change their names but few have. Why? Because it’s more complicated than a simple name change.

Dishonestly defending your reputation is ‘not OK’. 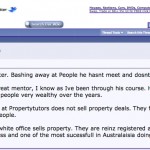 Attack of the sockpuppets ... Sean Wood anonymously recommending himself (PropertyTalk.com)

Returning, briefly, to the topic of sockpuppets and astro-turfing being used to dishonestly ‘defend’ a reputation, I’ve had some (private) response to my post outing Sean Wood as ‘MUFFIT’. If you recall, MUFFIT posted on the PropertyTalk discussion forum several glowing (anonymous) satisfied-customer endorsements for Sean Wood …

“Wood is a great mentor, I know as Ive [sic] been through his course” etc

… and BTW denigrated me for daring to suggest that perhaps a Richmastery leopard doesn’t change its spots. It transpired that MUFFIT was actually a pseudonym for Sean Wood — so he was, err … anonymously recommending himself. Er, tacky.

More than that, it’s misleading, I think. Funny that. (But not so funny is that the Fair Trading Act has a sanction against misleading and deceptive conduct in the course of business.) It’s certainly behaviour that qualifes for a little of Daniel Solove’s ‘internet shaming’, don’t you agree? (Shaun Stenning has had various sockpuppets spring to his defence here on thePaepae.com too, I believe. Oh, and come after me.)

It seems to me that dishonestly defending one’s reputation in this way is a step too far. I personally see that as indicator of character. Someone contacted me in response to my earlier post Thoughts about authenticity — and in passing, vouched for Sean Wood telling me he’s not the sharpest knife in the drawer (or words to that effect) especially when it comes to using the internet, but that he is an honest businessman, and that he doesn’t, as I have perhaps implied, mix property sales with his ‘education’ … well, not anymore, they said.

I must say, looking at his track record, and statements from his former business partners that contradict that, and his ‘new hire’ former Richmastery stablemate Steve Goodey (also someone with a demonstrated track record) I’ll have to reserve judgement. (Further, methinks there might be a trace of naivete and even Stockholm syndrome in those comments from his referee?)

As Jon Stewart said in his interview with Rachel Maddow: “We have a tendency to grant amnesty to people we agree with, and be dismissive of people we don’t…”.
I do want to be fair to Sean Wood et al. Any other (genuine) comments welcome, privately or publicly,