« Self-hate as a metric of intolerance?
Why not put it out there? » 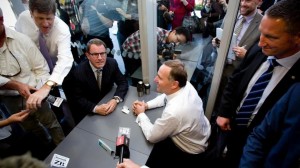 The Attorney-General has ditched plans to demand nearly $14,000 in court costs from freelance photographer Bradley Ambrose over the long-running “teapot tape” saga.

Ambrose was embroiled in controversy and faced criminal investigation after he taped a conversation between Prime Minister John Key and Act Epsom candidate John Banks at an Auckland cafe just before the November election last year.

He said it was accidental but Key said the recording was illegal and laid a complaint with police.

Ambrose went to the High Court to ask for the conversation to be declared public. This was rejected and was followed by a memorandum filed in the Auckland High Court seeking $13,669 in costs.

But on Wednesday, Crown Law Office spokeswoman Jan Fulstow confirmed the order had been withdrawn by the Attorney-General. …

Like, I’m sure, many other journalists and non-journalists, I saw the Attorney-General claiming $14,000 in costs to prepare for and attend a court hearing on whether a conversation carried out in front of 40 journalists with cameras and recorders was ‘public’ as dubious. Politics lecturer Bryce Edwards labelled it ‘political vindictiveness‘.

A NZ Herald editorial at the time Crown should pay its own tea tape bill pointed out that the Attorney-General didn’t even argue the question at issue of a ‘public’ or ‘private’ conversation:

At the hearing, counsel for the Attorney-General chose not to address that issue, arguing instead that Mr Ambrose’s request for a declaratory judgment should be refused on procedural grounds. Since police were investigating a complaint from Mr Key, the Crown suggested a court ruling at that stage would interfere with the process of criminal justice.

Judge Helen Winkelmann agreed, deciding it would not be appropriate to conduct “a mini-trial as to whether certain conduct constituted a criminal offence … in advance of a police investigation or trial”.

So, yes, I agree with this week’s decision. I think the Crown seeking costs (including a $700 limousine bill) for their ‘motion’ asking the judge to kick the issue to touch while a police investigation was carried out (and, coincidentally, a General Election, ahem) was ‘off base’ at all sorts of levels.

That the police investigation led to no charges but merely a policeman’s untested statement that Ambrose had acted ‘unlawfully’ but it wasn’t in the public interest to prosecute him is echoed in this:

[Crown Law Office spokeswoman Jan] Fulstow said the move [to withdraw the application for $13,669 costs against Ambrose] was also prompted by “the public interest in bringing the matter to a close”.

Good old ‘public interest’ vs ‘the issues that matter’.