Questions about the teapot investigation 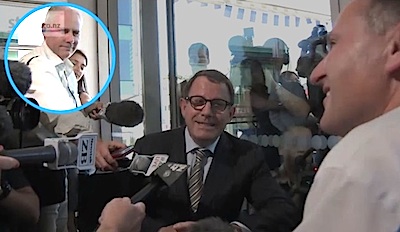 Police explained the delay in reaching a conclusion saying "it took time to talk to those involved, particularly members of public who were in the cafe" But no investigator has spoken to me ... and I was standing right there. (pic: stuff.co.nz)

So, it’s been announced the cameraman who recorded the pre-election ‘cup of tea’ between John Key and John Banks in November last year won’t be prosecuted. Stuff.co.nz reported:

Police will not lay charges over the “teapot tape” saga and say freelance cameraman Bradley Ambrose has received a warning. Assistant Police Commissioner Malcolm Burgess held a press conference this afternoon and said police had resolved the case. While he only received a warning, Ambrose’s actions were illegal, Burgess said.

Illegal? Oh really? That’s an opinion, surely? Perhaps a qualified one, but an opinion not tested in court, I’d say. Unlike the ‘organised criminal group’ charges which fell over last week.

“We were satisfied on this occasion that there was [prima facie evidence]. But police decided there was not sufficient public interest in the matter going to court, he said. “I reached the view that a prosecution was not required in this instance.”

In the view of police investigators, the recording was “most likely” on purpose, but at the least “reckless”. Burgess said he would still advise media organisations not to play the tape

Asked why the inquiry took so long, Burgess said it took time to talk to those involved, particularly members of public who were in the cafe.

That’s intriguing. They spoke to the public? Funny thing: I was there, in the cafe (see blue circle in the frame from Fairfax video) … and, although I think I can credibly be called an eye witness, I haven’t been approached by anyone investigating the case to discuss what I observed happen that afternoon — and I was standing right at the table.

Is it possible a sense of constitutional decorum seeped into the police investigation? Such that they decided not to interview the journos there? Or, having issued ‘advice’ and search warrants to news media organizations in the lead-up to the general election (and creating headlines around the world thereby) did the police perhaps think better of inviting the qualified witnesses available in for a quiet chat … over a cup of tea?

Update: Good thinking on the issues from Andrew Geddis and Russell Brown.