Here’s a sign from the San Francisco satellite rally of Jon Stewart’s Rally to Restore Sanity, inspired, I think, by a line he delivered on The Daily Show. 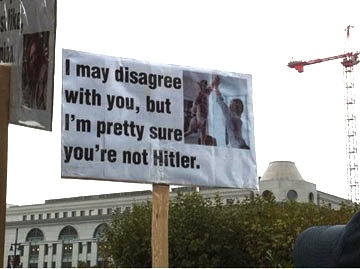 'I may disagree with you, but I'm pretty sure you're not Hitler.' (image Huffington Post)

In my dealings with those with whom I strongly disagree about things that are important to me, I make a real effort not to demonise them or write them off as idiots. I believe in dialogue.

For instance, I’ve emphasised to several members of the Howick local political community that I don’t regard them as insincere or corrupt, but I completely disagree with their stance on some issues and I’m critical of their actions. Further, I personally interpret their actions as based on ignorant racism and bigotry and also feel they don’t represent me or people like me.

I do and will oppose those actions. But that doesn’t make them fascists or Nazis in my book, and I don’t wish them ill personally. Likewise with the hyperbolic spruikers I tackle from time to time like Dean Letfus, Shaun Stenning, Steve Goodey and others.

I disagree with what they’re doing, and will say so … but I’m pretty sure they’re not Hitler. 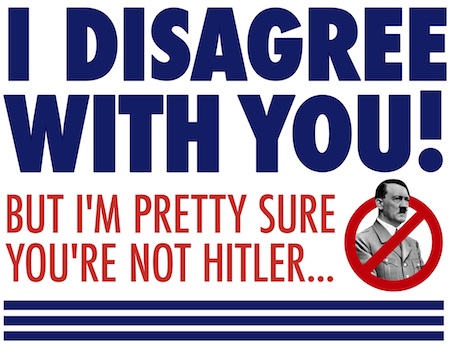 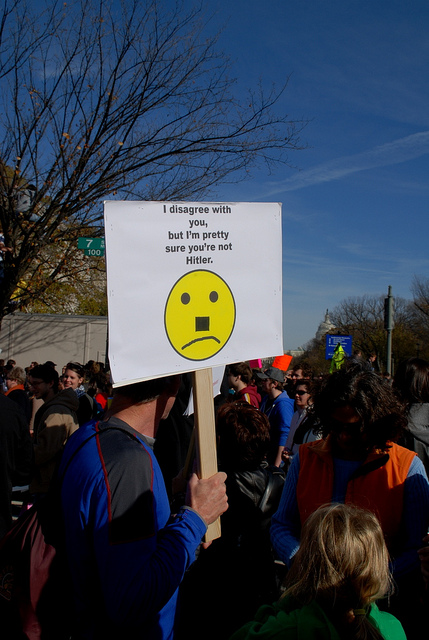