« Yes, you are accountable for your words… but even more so for your actions.
Accountants promoting internet get-rich-quick? Good grief. »

I don’t know Dick Quax personally but my daughter met him out campaigning and said “He was lovely”. The former Olympic runner is heir-apparent to FYT (fine young Tory) Jami-Lee Ross‘s super-city Auckland Council seat now that Jami-Lee has begun his sentence term as National Member of Parliament for Botany following Pansy Wong’s resignation under a travel perk abuse cloud.

I knocked about a little with Jami-Lee Ross over our push back against the (in my opinion) racist campaign to eject any living expression of Maori culture from the Emilia Maude Nixon Garden of Memories in Howick, where I live. [See Why do you think we call it a struggle?]

Dick and Jami-Lee ran as a dynamic duo for the Auckland Council in last year’s super city elections, spending up LARGE in the process. (I asked Jami-Lee what he spent and he told me … it’s public information by now. A lot.) That election saw Jami-Lee voted on to the Auckland Council, but Dick missed out, partly, it was thought at the time, because of blowback on his perceived-as-negative attacks on Mayor Len Brown’s credit card spending. It made Dick look petty, but fresh-faced Jami-Lee, equally strident about the so-called issue, seemed to avoid the stigma.

But them’s the breaks, too bad for Dick … until the embarrassing situation of National MP Pansy Wong and her husband’s ‘business trips’ to China paid for by the taxpayer under a perk intended for private travel, and her clumsy misjudgement witnessing business documents in China as ‘Minister of the Government of NZ’ opened up her Botany seat to the ambitious and well-mannered political upstart (oh, and National Party member btw) Jami-Lee Ross via a by-election … and by extension, Jami-Lee’s barely-used Auckland Council seat to Dick Quax — Batman or Robin? — if all goes according to plan.

That’s all by way of introduction to this slogan on Dick Quax’s hoarding which I photographed when it caught my eye yesterday: ‘Preserving Howick’s Heritage’.

That looks like political code language — of the same ilk as the Tea Party’s exercises in ‘how-to-say-what-you-mean-without actually-saying-the-words‘ e.g. …

So, what does Dick Quax’s unquestionably Tory campaign actually mean by
“Preserving Howick’s Heritage”? What is THAT code for?
Let me hazard a guess: ‘Keeping Howick WHITE’ perhaps?

By ‘heritage’ some in Howick mean venerating tradition that is ABM (anything but Maori). Stalwarts of the phantom Howick Ratepayers Association (average age: 65+?) play up the role of the Fencibles — a gaggle of retired British soldiers who were put out to pasture in this part of Aotearoa New Zealand) during NZ’s colonial past. Some in the local community seem to revere the Fencibles as some sort of noble South Pacific conquistadors (the Spanish and Portuguese explorer soldiers). The mighty Fencibles came here to wave the (British) flag, build stockades (!) and make sure no uppity Maori showed their faces nor disturbed the ‘pioneers’, their women and livestock here in godzone Howick. Living people have said as much to me. To my face.

I know some of those including members of the phantom Howick Ratepayers Association who became so agitated over plans to rebuild a whare (house) that was being used for cultural exchange before an arson attack (an unsolved crime). They waged a concerted subversive subterranean political and PR operation with the subtext: ‘It’s-nothing-to-do-with-racism-but let’s-just-get-any-remnants-of-Maori-culture-out-of-the-Garden-of-Memories’. It was a wretched business. We’ve been let down by people in community positions — people of whom we had a right to expect better.

The bitter and protracted campaign consisted of nasty letter-writing (even I received some), artificial ‘appeals’ about Manukau City Council’s consent to rebuild the little whare (house) in the Gardens, taking a case to every possible civil body, pulling publicity stunts (remember the ‘Declaration of Independence’ [vomit] from Manukau City Council’?), berating and slandering public officials and brow-beating council employees, and even abusing local Maori in the street.

Another conservative-backed campaign to appeal and overturn the Local Government Commission’s decision to name the ward covering the geographical area of Howick, Botany Pakuranga ward Te Irirangi after a prominant Maori chief (oh the horror!) was successful. Various politicians angling for geriatric/racist support lent their weight to idea that a Maori name for our ward would ‘not represent Howick’.  Bright hope Jami-Lee Ross was quoted as calling the choice of Te Irirangi  “appalling and embarrassing” for many people the community board represents in East Manukau. (What?)

One dipstick Manukau City Councillor David Collings even put the rejected name Te Irirangi up for ‘sale’ on Trade Me — just a joke, he told me, when I suggested that daft step eviscerated the credibility of his statement to me that he was ‘not a racist’. Right. Of course you’re not David.

The proponents of those stunts will probably take comfort from Dick Quax’s ‘Preserving Howick’s Heritage’ slogan and what they read into it, I suppose. Dick Quax’s election code is an attempt to subtly reach out to that redneck constituency, I guess.

It makes my lip curl. 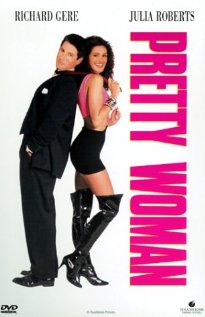 Politicians (of all hues) when offering themselves for election, sadly, can often suffer from what I call The Pretty Woman Syndrome which I named after the movie with Richard Gere and Julia Roberts and this interchange from an early scene:

Edward, a businessman (Richard Gere): What’s your name?
Vivian, a prostitute (Julia Roberts): What do you want it to be?

It is so tempting for an aspiring candidate for office — whether of the ‘left’ or ‘right’ — to try to be all things to all people, to attempt to straddle the ‘middle’. Far easier to give a sly nod-and-a-wink to certain of their constituents, but to avoid the electoral ‘cost’ of taking a principled stand. Better to cynically aim for the populist centre vote by mouthing meaningless platitudes or dispensing 200 word bites like this: 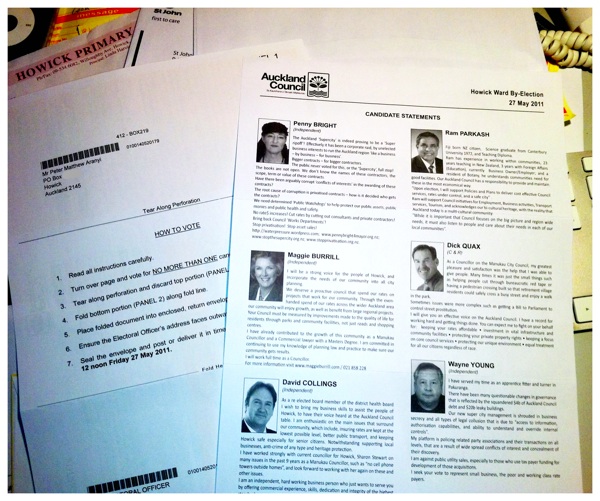 Howick gets another chance to pick somone for Auckland Council

It’s a challenge to be a leader rather than a ‘representative’.
Sometimes, moral leadership is a one-way ticket to oblivion.