« All in a good cause, we assume?
Joy of Tech having a laff at Apple maps » 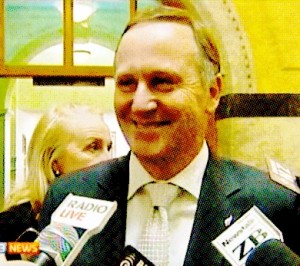 In which Braunias delivers a poke of (well-deserved?) ridicule and indignity to the Prime Minister’s ‘Planet Key’ clanger.

I wonder if Mr Key or his advisors sense yet how complete the appearance of tone-deafness was in his juxtaposing a ‘Nirvana’ of abundant golf courses (no toilets) with ‘nasty party’ policies like welfare cuts/crackdowns, school closures mergers and, of course, asset sales.

Combined with his determined ‘Keyvasive action‘ Mr Key’s failure to acknowledge that his minister John Banks’ has, er, truthfulness issues … well, do you think they make him look out of touch?

Of course, I could be reading this completely wrong, and it may be the nation continues to hold the prime minister in a warm and undying embrace of popular approval. But that’s not how it works.

Mr Key is being seen as cynical … and no longer the ‘anti-politician politician’. (Was he ever, really?)

Look at these damning comments from John Armstrong’s NZ Herald column today … Backed into a corner, so come out joking 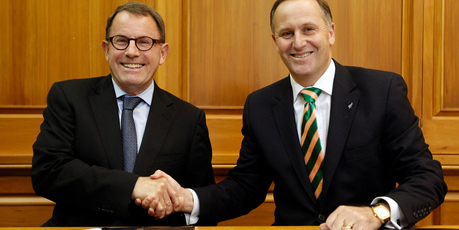 For now, Key is lumbered with Banks by virtue of needing his vote to secure a majority on legislation where National does not have the backing of the Maori Party.

But this is now a one-sided relationship. Banks is now permanently indebted to Key for retaining him as a minister when by any reasonable test he has failed to meet the high ethical standards expected of someone in such a position.

Act’s leverage – minute as it already was – has been heavily discounted accordingly.

Banks is now essentially an irrelevance. His only other options are to resign his ministerial warrant and go to Parliament’s backbenches, where he could choose to vote against the Government on some measures – something which would lead to even more scorn being heaped upon him.

Alternatively, he could resign from Parliament. No one would bet against that happening.

But the more immediate question is how much damage Banks’ remaining a minister is doing to Key’s reputation.

Damage to a reputation. Yes, as Claire Trevett rather memorably said:

Having withdrawn all his own credit from the ATM of credibility, Banks is now relying on Key’s. The reason Key has given Banks his pin number is that the PM’s eye is on the bigger picture, just as it was with that rather demeaning cup of tea: stability of Government.

It may well be said that Mr Key understands his words and actions are diminishing his reputation. And he may have calculated that as acceptable (what choice does he have?) for the sake of big issues … but it seems to me his clumsily-delivered, actually-not-all-that-funny-prime-minister, ‘Planet Key’ nonsense smacks of, well, a certain contempt.*

That just strikes me as a waste of Brand-Key’s political capital and further, it risks corroding the famous teflon coating.

*Same with his “Maori have more positions on water than Lady Gaga has outfits” ‘joke’. Gauche.