The likability of ‘Teflon’ John Key 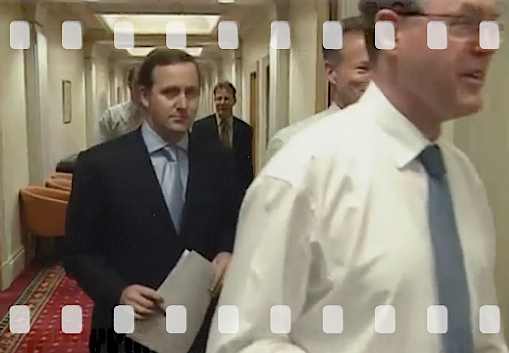 John Key preparing to emerge from the shadows. (Still from 'The Hollow Men' movie.)

I’ve only seen John Key when his ‘show face’ has been on, but even then he seemed to me to be what this interviewer, Adam Dudding, calls ‘Teflon’. It’s claimed in Nicky Hager’s book The Hollow Men that Key gave an assurance of support to Bill English for the National Party leadership but switched his vote from English to Don Brash the night before.

Just a short time later, relatively speaking, he was ‘the least experienced parliamentarian ever to have become New Zealand’s Prime Minister’. It looks like he’s got a winning formula.

Key is awfully friendly. He chats and burbles and smiles, and flirts with his diary-wielding assistant Danielle. Where many politicians give pointlessly Teflon-ish answers when asked about the mechanics of politics, Key answers with something resembling candour (though perhaps that’s just a superior form of Teflon).

So yes, he says, the day may eventually come when his proudly worn labels of pragmatist and non-ideological get reframed in the public eye as wishy-washy and doesn’t believe in anything.

“In the 24-7 blitzkrieg of the media, eventually they’ll tire of every politician, and I’m not unique in that regard. So the things they like about me, I think you have to accept, over time they won’t like so much about me.

“It’s easy to form a view that every time a journalist writes something bad about you it’s because they’re just against you, and they’re just a puppet for the opposition. You can build up these fiefdoms and prejudices.”

Two things:
(1) Interesting that he recognises he’s benefiting from being ‘liked’ by the media.

(2) That comment about seeing journalists who write ‘something bad’ about him as ‘against you’ or ‘puppets for the opposition’ is fascinating given Key’s own reflexive character assassination attempts against journalists Jon Stephenson and Nicky Hager recently. By reflexive, I mean his attacks on their integrity seemed to be the first thing out of his mouth when asked about their published claims.

We’ve discussed that tactic and tendency before in ‘How to have a FAIR argument‘. No surprise.