This ‘operation’ falls into the same dubious half-light as the murky ‘Domain Registration’ scams where plausible-looking documents offering to register your domain for, er, let’s call it uncompetitive prices are sprayed around looking for suckers.

Low-ball share buyer Bernard Whimp has made close to $300,000 through an offer made to Vector shareholders by his limited partnership Energy Securities. The energy company yesterday said more than 300 of its investors had accepted an offer to sell their shares at a price that was significantly less than their market value.

Companies associated with Whimp, a former Christchurch property developer who is now registered to a Sydney address, sent letters to shareholders in seven large listed companies between Christmas and New Year.

Vector, Telecom, Fletcher Building and TrustPower investors were among those targeted with offers to purchase shares at a discount of up to 43 per cent on the market price.

Yesterday Vector said 373,209 shares, or 0.15 per cent of their shares that are available for trading, had been sold to Whimp’s company.

Energy Securities had offered $1.56 per share – 34 per cent less than the $2.36 they were trading at on the market on December 29. The difference in the offer price and the listed price could have netted Energy Securities $298,567.

Vector chairman Michael Stiassny said he was concerned shareholders had unwittingly sold their shares at a rate below market value. “These shareholders did not receive a fair price for their shares and that absolutely galls me,” he said. Stiassny said that while it was up to individuals to make their own investment decisions the board was concerned at the style in which the share offer was made.

Read on at the NZ Herald. 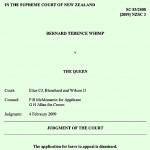 Of course, I’m sure Low-ball share buyer Bernard Whimp (who has previously used limited partnerships to get around a four-year ban on holding directorships that ended in October) sees nothing wrong with what he does.

[1] A company controlled by the applicant was put into liquidation. The liquidator required the applicant to leave the premises. He returned that evening and removed property belonging to the company. Two days later the applicant was given a notice under s 261 of the Companies Act 1993 requiring him to deliver up that property. The notice as drafted required delivery by 9.00am the following day but, at the request of the applicant, the time was extended to midday that day.

[2] Following trial by jury, the applicant was convicted on counts of burglary, removing documents of a company in liquidation and failing to comply with the notice to deliver up. Having appealed unsuccessfully to the Court of Appeal,1 he now seeks leave to appeal to this Court.

…. The application for leave to appeal is dismissed.

I personally regard this type of operation as sleazy.