Learning from the NY Times soul-searching on digital media 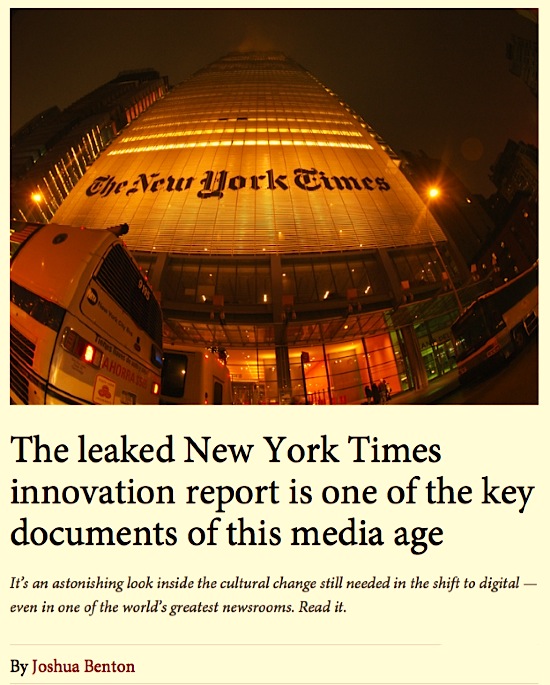 The whole leaked report is worth a read, if you’re interested. [I downloaded it, and ran it through Adobe Acrobat Pro to de-skew and OCR the text. If you want a copy of that file (~20 MB) drop me a line — address at the ‘About‘ page — and I’ll send you a Dropbox link.]

One theme that emerged is how aggregators like The Huffington Post, parasitically plunder the NY Times‘ expensively-produced original journalism, then use more savvy and aggressive social media tools to gather web traffic to themselves … with the ‘digital pick-pockets’ even evincing some queasiness for their victim.

Now The Huffington Post regularly outperforms us in these areas – sometimes even with our own content. An executive there described watching the aggregation outperform our original content after Nelson Mandela’s death. “You guys got crushed, he said. “I was queasy watching the numbers. I’m not proud of this. But this is your competition. You should defend the digital pick-pockets from stealing your stuff with better headlines, better social.”

The main thing I got from the report — whether I’m right or not — is that the NY Times sees itself as an institution, with a legacy to protect, and its competitors are more nimble, entrepreneurial and less wedded to the values of modesty and ‘straightness’, reliability etc of the traditional newspaper approach.

For the large part, with exceptions, the internet and its various echo chambers have brought about a dumbing down of news, in my opinion. Lowest common denominator. There’s also excellence. Like a wolf pack, the hungrier, more aggressive wolves will dominate.

The Huffington Post may have the traffic (it’s a long time since I’ve been there, and I used to go a lot when it was a political website — before it got hooked into ‘lifestyle’ and celebrity news) but not the reputation.

That’s not a howl of anguish. What is, is.

There’s a lot more to it. As I said: worth a read.