« Is John Key ‘hugging a corpse’? Does he have a choice?
Oh, for a straight answer to a straight question »

It was good to see some ‘pushback’ from the NZ Herald‘s veteran political columnist John Armstrong against second-guessing armchair critics (who happen to be bloggers).

In an article originally titled:Blogging parasites don’t let the facts get in the way with the subtitle: Cheap shots at press corps based largely on ignorance and show no regard for journalistic accuracy or taste he poked the borax back at a couple of (in this case) left wing bloggers standing in for the blogosphere.

Good on John Armstrong calling it as he sees it. I thought, and tweeted my support this morning:

So, it was a surprise this afternoon to see John’s headline and sub-head had been edited … 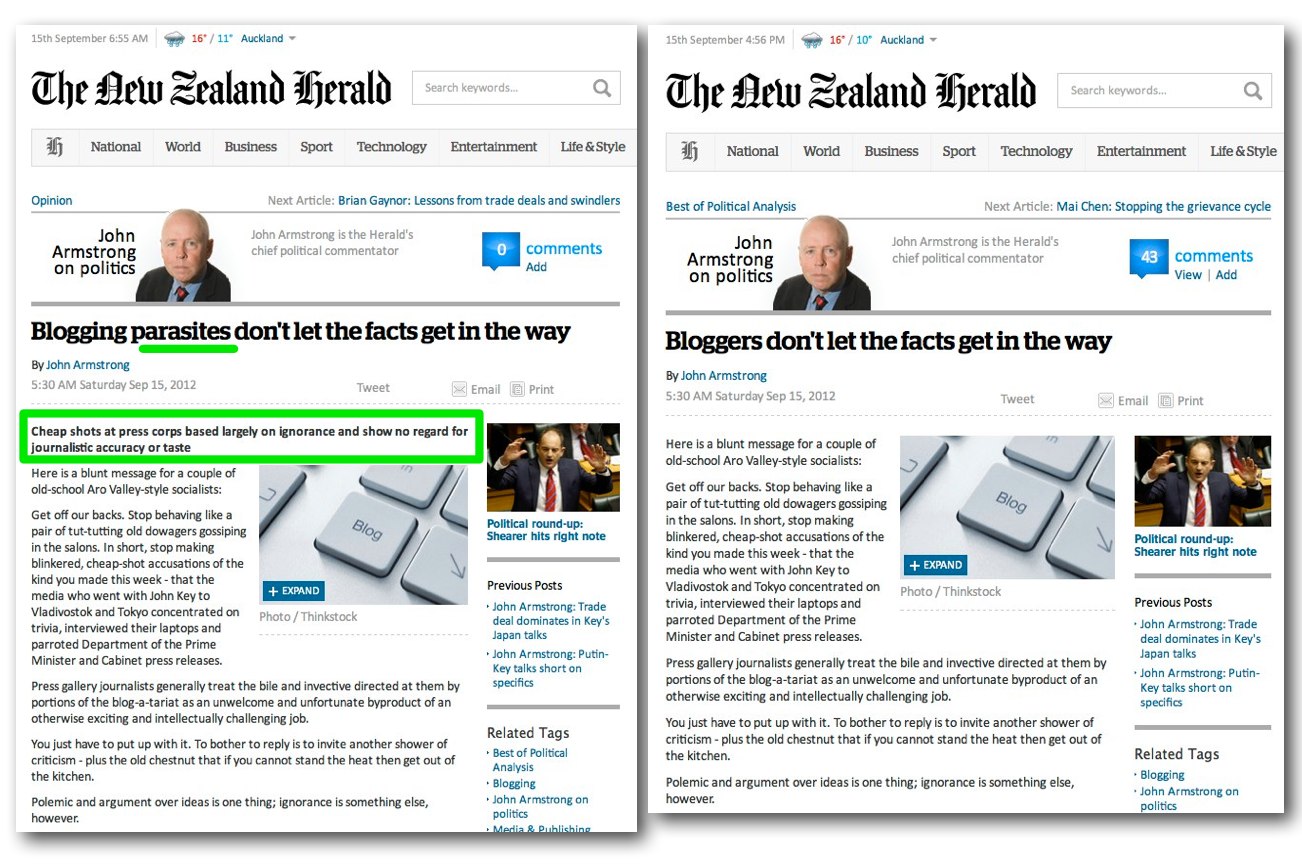 I strongly agree with John’s criticism. And I think his description of bloggers as ‘parasitic‘ is completely fair. I’ve said similar things about the ‘cheap shots’ aimed at mainstream media …

There’s a sad, kid-with-his-nose-pressed-up-against-the-glass yearning in much of the whiny ‘commentary’ about how social media has ‘attacked’ mainstream media, and how MSM ‘hates’ or doesn’t ‘get’ social media. Bloggers from Cameron Slater to Martyn Bradbury agree on the sad state of MSM compared to … er, … their blogs.
A lot of it is, as I see it, just a Generation gap style adolescent longing to be regarded as significant and different. People who see themselves as a ‘new generation’ of media pine and hanker to be acknowledged for their talent, (in some cases) hard work and dedication to their social media spinning jenny, and express frustration at a lack of doors swiftly opening for them.

Further, some bloggers who themselves rely intensely on mainstream media (or parasitically, as discussed) appear to hold a giddily inflated view of the role of social media in ‘leading’ news these days. They point to examples where MSM journalists pick up on ‘stories’ or developments some of which emerge via social media … as if that is somehow akin to heralding the extinction of the dinosaurs.

‘Old media’ will absorb ‘new media’ as I have argued. Read John’s article for yourself. As I see what he was doing (and he doesn’t need me to speak for him!) John was primarily calling out ill-informed, inaccurate reporting/blogging — ignorant, he called it — and secondarily writers needlessly taking a ‘cheap shots’ at MSM reporters (and press gallery journos in particular) as if they were incompetent.

An unpleasant, reactive ‘us and them’ partisanship permeates a lot of the so-called commentary about media e.g. Cam’s fact-free assertion that the Press Gallery is bound by some cosy set of rules to prevent them criticising parliamentarians. That might sound good in a blog post but it’s pure fantasy. (I worked there, so I feel I can comment. Does that make me ‘pompous’? Who cares?)
Now, seriously, is bias and ‘provider capture’ present in the media? Do ‘access’ issues concern or constrain some journalists?
Yeah, sure, sometimes. But it’s not a monolithic conspiracy — ‘old’ versus ‘new’ media.

John Armstrong is one of the good guys.