« Bluster and threat are commonplace
How dangerous is Facebook? »

Ad-supported site … or ‘supporting’ the advertisers? A case study. 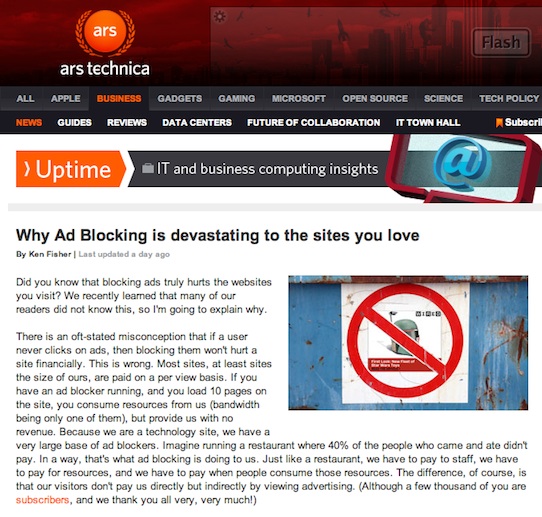 Ars Technica’s Ken Fisher laid out his case “Why Ad Blocking is devastating to the sites you love” including this section which got me thinking:

My argument is simple: blocking ads can be devastating to the sites you love.

I am not making an argument that blocking ads is a form of stealing, or is immoral, or unethical, or makes someone the son of the devil. It can result in people losing their jobs, it can result in less content on any given site, and it definitely can affect the quality of content. It can also put sites into a real advertising death spin.

As ad revenues go down, many sites are lured into running advertising of a truly questionable nature. We’ve all seen it happen. I am very proud of the fact that we routinely talk to you guys in our feedback forum about the quality of our ads.

I have proven over 12 years that we will fight on the behalf of readers whenever we can. Does that mean that there are the occasional intrusive ads, expanding this way and that? Yes, sometimes we have to accept those ads.

But any of you reading this site for any significant period of time know that these are few and far between. We turn down offers every month for advertising like that out of respect for you guys. We simply ask that you return the favour and not block ads.

Tech-savvy or not, I’ve used some form of ad-blocking for years. Initially using pop-up stiflers and the userContent.css lists that are published to block ads — I’m now a satisfied user of Safari AdBlock and ClickToFlash … and regularly use Flush to clear out the Flash cookies that still accumulate like dental plaque. (It was animated Flash ads competing for my attention that drove me to it. We filter spam email for the same reason … don’t we?)

However, I sympathise with Ars Technica and other good sites, funded by eyeball$$. It’s an issue.
With the ‘free’ culture of the interwebs, what’s a wholesome site to do? Well, there ARE other models offering ‘premium’/members-only feeds and subscriptions etc.

But there’s another important issue, too, embedded in this debate:

A discussion forum I have supported and frequented for several years (PropertyTalk) has, it seems to me, always accepted advertising “of a truly questionable nature” (to use Fisher’s phrase from above) — in this case, from advertisers who are sometimes the subject of trenchant, comprehensive negative criticism (even exposé) on that very forum.
The unpalatable compromise of Fisher’s “sometimes we have to accept those ads” fits.

I understand. Economics. It’s not a charity. That’s OK, for me. I’ve blocked the ads.

And truthfully, for a long while, the shining light of this particular discussion forum was its courage under fire: resisting prolonged, heavy bullying by (coincidentally) its biggest corporate advertiser who clearly hated what was being said about the firm, its officers and its practices — said in the forum! To the site’s credit, a lot of that discussion was left unmolested.

But under intense, almost continual pressure and, eventually, legal threats, it seemed (to me and other observers) that the forum management’s resolve began to crack and crumble. Just a little at first. While in some crucial ways nobly staying true, in others they conceded. They caved in. Just a bit. For instance, they shut down some discussion threads, shredded others, ‘muzzled’, drove away or ejected some posters. Pissed off some others. Just a few. Quietly.

Very recently, it seems, under threat and pressure from different advertisers/spruikers, or the poor economy, or something, the ‘corruption’ (to use a word I really dislike) appears to have spread.
It has now reached the point where unlike the Ars-Technica forum where “we routinely talk to you guys in our feedback forum about the quality of our ads” … the forum Moderators and management appear to be actually CENSORING THE DISCUSSION FORUM to make the site more ‘hospitable’ for their shonky advertisers.

My own (I thought respectful) comments about the dilemma faced by an ad-supported site sponsored by ‘questionable’ advertising, were published on the forum but met with hostility and anger from some (You @#$%*! How dare you criticise us? Don’t you know what we’ve sacrificed?-type hurt feelings) … as well as abuse from the usual rag-tag parade of anonymous sock puppets.

I’ve paid for advertising on the site too, over the years, as well as posting comments in the forum — always in my own name — so that might have gained me some meagre ‘credit’. Dunno. Not sure. Probably not.

So anyway we discussed it on the forum, defensively, sure, but we did discuss it. Not to any real conclusion or meaningful effect, it seems …

… recently I’ve personally observed a level of censorship — of both opinion-comment and topics (!) — that I hadn’t imagined would exist on a site that:
(1) promotes itself as ‘free and independent’,
(2) says it operates in accordance with published ‘rules’ and
(3) claims its Moderators are divorced from commercial/advertising aspects of the site.

Reflections
Last year I asked the owners of the forum to consider what it has cost them to harness their ingenuity and energy in providing a platform for what I and some others see as unworthy marketing and promotion, using the words of Coldplay’s Chris Martin:

The phrase ‘Yes, it’s ghastly, but consider the commercial realities of the situation’ soothes none of my disillusionment at what can only be seen as a loss of authenticity by the site.

Metaphors spring to mind of gangrenous toes being amputated to save a foot, or a foot to save the leg, or a leg to … you get my drift. And maybe I am missing the ‘big picture’, and being, I don’t know, too righteous.
But let me say this, echoing yesterday’s thought about bluster and threat being commonplace: In my experience, caving in to a bully’s threats never, ever works out well for you in the long term. And believing anything a compulsive liar tells you is folly.

Ad blockers aren’t the problem. As Ars Technica’s Ken Fisher says, it’s all about good communication with the readers and fighting on their behalf whenever you can. Holding the line, mostly. Not engaging in double-speak and the craven compromise of publicly stated standards … no matter how carefully that’s justified.

I speak as a friend — but not necessarily an always endearing one.

UPDATE: A mind-expanding interchange illuminates another side of this

A friend emailed this morning, telling me that one of the odious spruikers whose activities I’ve discussed in that forum had burst a blood vessel and spat the dummy — with me as his target.

This man was the inspiration for my post How to have a FAIR argument and this thought:

The fevered ducking and diving that some operators engage in when confronted with their shortcomings is an awful spectacle to behold. Far from taking responsibility for their actions, or even delivering a straight answer to a straight question, they bob and weave, deliberately miss the point, and spew venom at their ‘opponents’. (Just like politicians?)

Now, that’s par for the course. I know he hates me. To be expected in some ways. (What triggered it? Who knows.)

But of more relevance to the topic of this post, were his trenchant criticisms of the Moderators of the site for allowing me (Peter) to allegedly lead an ‘orchestrated campaign of derision’ and to ‘disrespect’ him. Oh dear. (Yes, using disrespect as a verb is ghastly, but let it go.)