Reflecting on why I oppose the National government’s proposed rushed legislation to retrospectively sanctify unlawful police surveillance actions, I found myself remembering back to when I was a sixth-former in Wellington and got a holiday job at the Supreme Court — coincidentally just as an appeal was being heard against the double murder conviction of Arthur Allan Thomas. 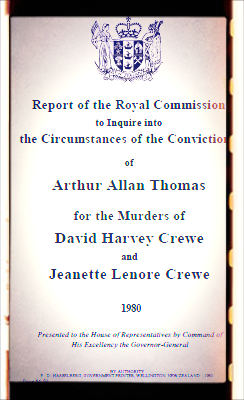 The unjust trials of Arthur Allan Thomas produced a loss of innocence for us as a country and enraged my 16 year old sense of ‘right’.

The New Zealand public were confronted with the grotesque, unpalatable but inescapable realisation that it appeared the investigating police officers had planted evidence — and lied — to gain Thomas’s conviction of the murders of Harvey and Jeanette Crewe.

Defence lawyers have always known cops and prosecutors can bend the facts and ‘selectively’ present evidence to build their case. (They’re only human after all, and ours is an adversarial justice system.)

But the manufacture of evidence against a defendant is, most fair people would agree, a step too far, even if we at times accept the police contention, “He’s a bad bugger that one.”

So in that context, I am uneasy with another Supreme Court decision being sidestepped with rushed legislation, crammed through under urgency in the final few days of a parliamentary term.

I just don’t buy the “50 investigations and 40 court cases in jeopardy” rationale — not without more and substantial evidence … more than a glib PM stand up media statement. Sorry, too important. That’s probably what the Opposition parties being asked to support the fast-track legislation are asking for too.

I think any change to the Bill of Rights Act should require the full democratic process including public submissions … rather than a half-baked fast-track push through the House.

Meanwhile, more reasoned public pleadings from goodfella Greg O’Conner, Police union boss, as he continues to spin. I heard him offering a homily in justification this afternoon to NewstalkZB’s Danny Watson involving trout licences and whitebait licences Hint: there’s nowhere you can go to get a whitebait license — you’re just allowed to catch them in the season. Geddit?

Sorry Greg, I’m not soothed by your homespun don’t you worry your pretty little head about that whitebait fritter entrée with the “We’ve got to crack down on the P-labs and criminal gangs” cheeseboard and cigars.

As I see it, the covert cameras weren’t authorised. Change the law by all means, but do it properly, Mr Key.

Coming up: My experience photographing the Wellington Team Policing Unit in action at Flanagan’s Hotel.