« The escape of exnzpat, Part 10
Lighting a candle versus cursing the darkness »

What we see depends on the filters we look through. An obvious thought, but often missed in the heat of debate. (image: teamworkphoto.com)

It’s been intriguing to watch the messy political debate in New Zealand about the findings of the independent inquiry, conducted by an internationally respected justice, into the case for compensation for wrongful imprisonment of David Bain.

I personally, largely ignorantly, thought David Bain was the killer of his family. A jury convicted him. But then the convictions were quashed by the Privy Council. The Crown Law Office decided on a re-trial, at which he was acquitted, having spent 13 years in jail.

A personal declaration: As a student I was several times employed as a vacation worker for the Ministry of Justice — once in the Supreme Court’s office coincidentally during an Arthur Allan Thomas appeal. That appeal was unsuccessful even though the work of scientist Jim Sprott unmasked the police’s bullet evidence as false (discussed here). For me, the mockery (literally) that the defence team endured from members of the public — some of whom were convinced that Thomas was guilty — taught me a lesson about groupthink/mob mentality I’ve never forgotten. So when I say, as I do openly, that I thought David Bain was guilty, I’m sharing my imperfect impression in the knowledge and awareness of its lack of weight. (In other words, wtf do I know?)

The Bain case has also sparked considerable speculation about whether ‘not guilty’ means ‘innocent’ in the NZ legal system. If I can add to it: for all intents and purposes, sorry, yes it does. Pining for the Scottish ‘not proven’ verdict, as some do, is a waste of brain cells. That distinction is just not a feature of our legal system. It’s not available in our binary system. Guilty or acquitted. Pick one. 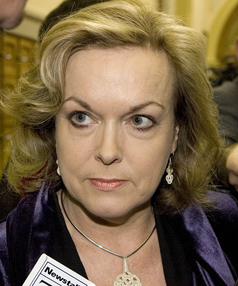 Justice minister Judith Collins has denigrated Justice Binnie's independent report ... and (in my view) demeaned herself and the country's reputation for fairness in the process.

I’m seeing a kind of litmus test in debate about the issue of compensation.

It seems supporters of Judith Collins (justice minister) are cheering her extraordinary denigration of the report of retired Canadian Supreme Court justice Ian Binnie whose inquiry finds in favour of compensation for David Bain as wrongly imprisoned — and incidentally, hammers the original police investigation (“investigative ineptitude”) and prosecution of David Bain in clear terms. (Which they don’t like, as you can imagine.)

Mrs Collins and her supporters, many of whom must be as ignorant as I am of the detail (but not all, see Martyn van Beynen’s opinion: Compensation for Bain would be ‘a travesty’) seem loathe or unwilling to regard David Bain as innocent — court finding, Justice Binnie’s report notwithstanding. (Where does that road lead?)

While I acknowledge Mrs Collins has found herself in a hard place politically, and may genuinely have severe misgivings about Justice Binnie’s report and his going beyond his scope, the way she’s handled it does not reflect well on her, or us. New Zealand has come out of this with the appearance of being an over-politicised banana republic. For me, the low point was Mrs Collins’ open mockery of Justice Binnie’s use of capitals in a heated email. How petty. And people lapped it up.

What I started out to write about is how the very same ‘data’ or information is being relentlessly filtered and selectively emphasised by various political tribalists. Naturally, the usual suspects RWNJ echo-chamber and anonymous/pseudononymous bloggers have soooo much to say on the issue, some even quoting each other(!) as if that will impress anyone.

Even allowing for the hostile media effect we discussed earlier (towards end of Declaring where you’re coming from) there’s a strong what-you-see-depends-on-where-you-stand aspect to the debate about this — which in this case is awful.

Some bloggers and commenters, avowed ‘Laura Norder’ supporters, seek to disregard David Bain’s acquittal (hello?) AND equally Justice Binnie’s report supporting his case for compensation with a breathtaking lack of empathy. ‘Give him nothing’ they cry, and ‘He should just be grateful he’s not in jail.’ Crikey.

Yeah, right. Wait until it’s your turn to face a legal system that fails — as they all do from time to time.

PS This summary from stuff (Fairfax) David Bain’s claim in limbo by Andrea Vance and Hamish Rutherford (complete with video of a very reasonable sounding Judith Collins) is worth absorbing.

Update: So, too, is this rather damning article — damning of Mrs Collins and her treatment of the Bain defence team and Justice Binnie — by Bain advocate Joe Karam: This injustice almost as bad as the first one.