« Misinformation experts
Do journalists have a franchise on ‘news’? Nope. »

ThePaepae.com ISN’T a political blog. There are plenty of those, and this year being election year in NZ, we will all be swimming (drowning?) in political commentary soon enough. (God help us.)

Nevertheless, I want to share some thoughts and attempt to put a punctuation mark at the end of Cathy Odgers’ (Cactus Kate‘s) supposed ACT candidacy — or, as I have come to think of it: The curious incident of the right-wing vixen in the night.

Right wing blogger Cactus Kate says some good stuff. A lot. Even though I disagree with some of it. (Like she cares. Sure.) - click to visit her blog.

Let me be very clear: We don’t always agree but I like her a lot, from her acerbic Cactus Kate writing. I cheerfully defended her ‘right’ to offer herself as an ACT candidate from what I saw as projectile vomit/personal abuse by Martyn Bradbury seeking to disenfranchise his political ‘opponents’. (Even though it was none of my business, as Martyn so helpfully pointed out. As if that matters.)

But it seems, Cathy, the often sardonic, intelligent right-wing blogger was engaged in a cunning plan — a conspiracy so arcane that Blackadder’s sidekick Baldrick might have described it as “A plan so cunning you could put a tail on it and call it a weasel. (In fact ‘weasel’ actually sorta fits. You’ll see what I mean.)

Cathy’s goal? Not the out-in-the-open, in-plain-sight one: To stand as a candidate. Oh no, far too obvious. Rather, it transpires, her goal was to dispirit and kneecap others who might have also sought to offer themselves for selection. (Makes you think differently of the expression ‘the courage to put your name forward’, huh?)

As noted previously, Cathy has expressed on her Cactus Kate blog what I can only describe as near-to-unflinching loyalty to ACT, in these terms:

Let me first start by saying I unequivocally support ACT. Other than Priscilla Tate you will not find a stauncher female member of the Party.
Within wide limits, I don’t care who the Leader of the Party is. I have and always will vote ACT. So I support the new Leader Don Brash and you will not find one word against him on this blog other than if he is too soft and his top marginal tax rate targets are too high.

Note the emphasis. One might be tempted to conclude that a part of Cathy’s identity is bound up in being perceived as ‘a staunch[…] female member of the ACT Party’. File that away, with weasel.

So, let’s explore this: A theory has emerged that that her apparent aim in offering herself as a candidate for the ACT list was to rid the party of the (as she sees it) unworthy influence of a couple of up-until-recently female ACT MPs. Females Hilary Calvert and Heather Roy were Cathy’s targets, apparently. Perhaps there were others. 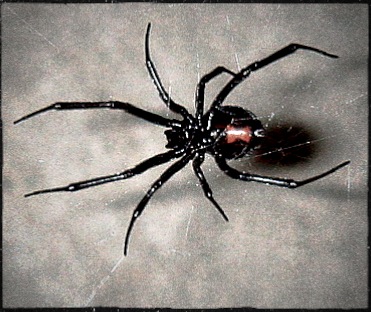 There must be a parallel in nature, like, you know, the female spider which copulates with and then devours her mate. That dangerous but (ahem) vaguely sexy behaviour gives the Black Widow spider (right) its name … and its reputation as a ‘man-eater’.

So … what is it called when a female spider devours her female rivals for the hot lovin’ embrace of a prospective mate? Does anyone know? Is there, say, a ‘Black Cactus spider’? … Too much to hope for, I guess, but a quick search comes up with the Portia jumping spider whose Wikipedia entry contains this fabulous double entendre:

Mating with Portia spiders can occur off or on the web. [Ha!]
The spider also practices cannibalism before and after copulation.

With ACT in the beehive, who needs a Queen Bee?

One look at the abundance of Y chromosomes on the recently hatched (geddit?) ACT Party list makes me wonder if ACT’s disgraced ‘Maorification’® spin doctor John Ansell’s [reported] praise of Cathy Odgers, viz. ‘You think like a man’ might be close to the mark.

In fine Diego Maradona style, Cathy herself describes this [alleged] ability as ‘a gift from God’:

‘And above all if there is a God it is the gift he gave me – to think like a man.’
— Cactus Kate blog

Bokay, Cathy. Sooo … you believe you ‘think like man’. Really? So much so that ONE woman out of the top eight ACT party list positions seems reasonable to you? Hmmm. And really? You’re kneecapping other women?

What does that make ACT? The party of older, white, male values?

I would never have described Cathy as a Hollow Man. Increasingly widely-read* “I’ve certainly never claimed to be objective or neutral. But I am indeed *non-partisan*” Otago Politics Prof. Bryce Edwards, commenting on the ‘upside’ for ACT (female) MP Hilary Calvert’s despatch/banishment/knifing-in-the-back, pointed to a loss of vision and loss of relevance for ACT:

It seems as if Calvert might actually be better off away from what still seems like a rather dysfunctional party. For although Act is no longer having the meltdowns that plagued it for the last year, it still has the appearance of a party without a real soul or solid foundation. Whenever political parties lose their raison d’etre, they increasingly chop and change, brand and re-brand, refresh their personnel, alter nearly every element of their nature, all in the constant search to be relevant again. And without the ideological anchors and coherent social constituencies that originally cohered the party, they remain in flux and in search of popularity. Unfortunately for Act, the public will never entirely take the party seriously again.

Those are extraordinary comments from Edwards. Losing one’s raison d’etre, without soul or solid foundation, or ideological anchor, makes you a Hollow Man.

Banks is just awful. He makes you want to consider voting Len Brown. Two time losing Mayoral candidate Banks is political desperation at its finest. He’s horrible and awkward, moreso around women. I am extremely tolerant of male idiosyncrasy and even I find Banks the pits. His political philosophy isn’t even close to ACT’s. He’s toyed once with ACT and didn’t have the metal. Banks would be a Shakespearian re-run of the return of Douglas.

(You can see why I lurv her writing, huh?)
One can perhaps rationally dismiss ACT as on the extreme fringe — a far-right ginger group lost in the wilderness — and describe its arch-supporters like the delightful and deeply loyal Cathy Odgers as indulging in pseudo-masturbatory er ‘policy optimism’. Dreamers.

From my point of view, when ‘Belonging’ becomes a higher value than truth-telling and one’s integrity (a dangerous word, I grant you), as Cathy’s actions have [arguably] revealed with the apparent duplicity over her ‘candidacy’, well, I worry.

Supporting the Party, ‘falling into line’, bowing to the creed of collective responsibility (‘Hang together or hang separately’) and groupthink are traps. That kind of wrong-thinking (‘male thinking’? Well, yeah, maybe) is responsible for all sorts of crappy, undemocratic and evil action.

Truth, then other principles, are the first casualties.