Not a ‘Vast Right Wing Conspiracy’ 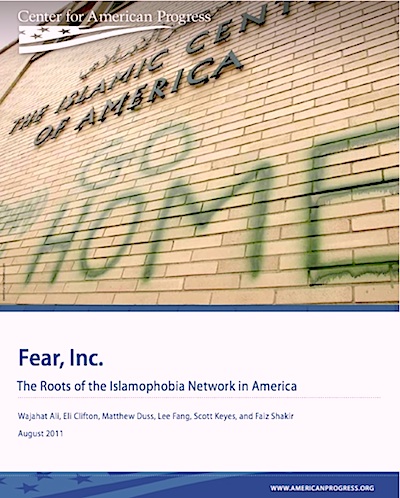 This in-depth investigation conducted by the Center for American Progress Action Fund reveals not a vast right-wing conspiracy behind the rise of Islamophobia in our nation but rather a small, tightly networked group of misinformation experts guiding an effort that reaches millions of Americans through effective advocates, media partners, and grassroots organizing. This spreading of hate and misinformation primarily starts with five key people and their organizations, which are sustained by funding from a clutch of key foundations.

Read the Fear, Inc. – The Roots of the Islamophobia Network in America report for yourself at the Center for American Progress or download the PDF directly here (1.7MB). [I’ve also uploaded it to scribd.com]

It’s introductory overview: It’s NOT a ‘Vast Right Wing Conspiracy’ but ‘a small, tightly networked group of misinformation experts‘ reminded me of some locals:

Having a point of view is fine. Expressing it is good. By indulging in dirty smear campaigns against one’s perceived ‘enemies’ and regurgitating strident reflexive talking-points and sometimes using overtly dishonest tactics, these ‘activists’ merely fuel the warfare (not class warfare. Nothing that dignified) and promote a sleazy factionalism which, sadly, often passes for political debate.

Do they care? Probably not. Both sides appear to me to be at times enamoured with the ‘struggle’.

Like a spaniel chasing rabbits through the bush, they’re hooked on the thrill of the hunt, the Fog of War — and often use their soapboxes in cyberspace to hack and chop at ‘the others’ … with spasms of vicious diatribe in wave after wave.

And as the Fear, Inc. report points out, hate-filled blogs can have an influence far beyond their writers’ intent:

[32-year-old, white, blond-haired and blue-eyed Norwegian mass murderer Anders] Breivik’s manifesto contains numerous footnotes and in-text citations to American bloggers and pundits, quoting them as experts on Islam’s “war against the West.” This small group of anti-Muslim organizations and individuals in our nation is obscure to most Americans but wields great influence in shaping the national and international political debate. Their names are heralded within communities that are actively organizing against Islam and targeting Muslims in the United States.

Breivik, for example, cited Robert Spencer, one of the anti-Muslim misinformation scholars we profile in this report, and his blog, Jihad Watch, 162 times in his manifesto. Spencer’s website, which “tracks the attempts of radical Islam to subvert Western culture,” boasts another member of this Islamophobia network in America, David Horowitz, on his Freedom Center website. Pamela Geller, Spencer’s frequent collaborator, and her blog, Atlas Shrugs, was mentioned 12 times.

… Based on Breivik’s sheer number of citations and references to the writings of these individuals, it is clear that he read and relied on the hateful, anti-Muslim ideology of a number of men and women detailed in this report & a select handful of scholars and activists who work together to create and promote misinformation about Muslims.

While these bloggers and pundits were not responsible for Breivik’s deadly attacks, their writings on Islam and multiculturalism appear to have helped create a world view, held by this lone Norwegian gunman, that sees Islam as at war with the West and the West needing to be defended. …

Worth considering? Yeah, I think so.
When I hear even intelligent, insightful bloggers people stoop to repeatedly, routinely, using abusive epithets like ‘liar’, ‘thief’, ‘idiot’, ‘criminal’, ‘trougher’, hate-merchant’, and worse against their opponents, I know they’re on a slippery slope.

They’re moonlighting as misinformation experts. Which, stripped of its self-justifying ‘I’m-a- political-strategist’ puffery, is, surely, just another word for liar — no?