« Read this and tell me it doesn’t remind you (just a little bit) of John Key’s SkyCity Casinos convention centre deal for extra pokie machines
A nice description of the journalist’s conceit (as in fanciful notion, not pride) »

One of my favourite right wing vixens pulls the plug, citing her children 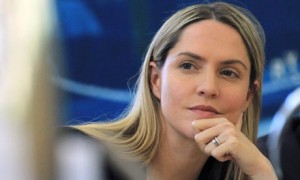 Photograph: Olivia Harris/Reuters via The Guardian

Louise Mensch, possibly the most well-known Conservative backbencher, has resigned as MP for Corby and East Northamptonshire, citing the difficulties of trying to balance her family life with political commitments.

Mensch and her three children will move to New York to live with her husband, Peter Mensch, who is based in the city where he works as manager of Metallica, Jimmy Page and the Red Hot Chili Peppers. She married him last year after her first marriage broke down.

Mensch said every effort had been made to ensure she could stay in her role, but she had ultimately made the decision to ensure the welfare of her family.

“I am completely devastated. It’s been unbelievably difficult to manage family life,” she said. “We have been trying to find a way forward with the prime minister’s office but I just can’t spend as much time with my children as I want to.”

Read on at The Guardian

Quite a good follow up piece here from Gabby Hinsliff: The lessons of Louise Mensch’s departure? There are none.

Well, maybe. Too bad. Good on her for being clear about her priorities.

I respected MPs as diverse as Pam Corkery, Katherine Rich and Simon Power for getting the hell out of politics when they saw how it worked from the inside. As Bismarck said:

“There are two things you don’t want to see being made: sausages and legislation”.

It crosses my mind to wonder what NZ’s own good-looking former right wing vixen (now ‘apolitical‘ ahem) Cactus Kate will have to say about this for-the-sake-of-my-children decision, if anything.

At least Louise Mensch didn’t torch her Party’s caravan on the way out and abuse her former team mates as ‘giant titheads’, as Cathy did. Nor did she, as far as we know, back-stab, undercut and sabotage the political careers of other female Party candidates who didn’t meet her required level of idealogical purity. Then leave.