Poisonous Andrew Breitbart – the attack was everything, the details nothing 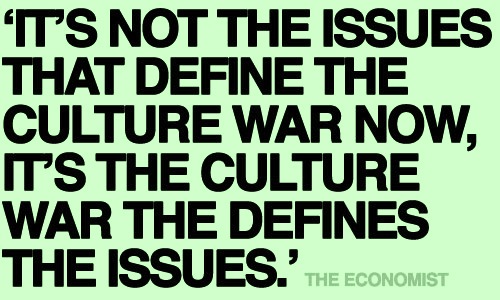 A fitting obituary of Andrew Breitbart from David Frum includes a reference to ‘culture war‘ and how some protagonists fight it: Attack with an INDIFFERENCE to truth and fairness.

… In fact, it’s hard even to use the word “issues” in connection with Andrew Breitbart. He may have used the words “left” and “right,” but it’s hard to imagine what he ever meant by those words. He waged a culture war minus the “culture,” as a pure struggle between personalities. Hence his intense focus on President Obama: only by hating a particular political man could Breitbart bring any order to his fundamentally apolitical emotions.

Because President Obama was black, and because Breitbart believed in using every and any weapon at hand, Breitbart’s politics did inevitably become racially coded. Breitbart’s memory will always be linked to his defamation of Shirley Sherrod and his attempt to make a national scandal out of back payments to black farmers: the story he always called “Pigford” with self-conscious resonance.

Yet it is wrong to see Breitbart as racially motivated. Had Breitbart decided he hated a politician whose ancestors came over on the Mayflower, Breitbart would have been just as delighted to attack that politician with a different set of codes. The attack was everything, the details nothing.

This indifference to detail suffused all of Breitbart’s work, and may indeed be his most important and lasting legacy. Breitbart sometimes got stories right (Anthony Weiner). More often he got them wrong (Sherrod). He did not much care either way. Just as all is fair in a shooting war, so manipulation and deception are legitimate tools in a culture war. Breitbart used those tools without qualm or regret, and he inspired a cohort of young conservative journalists to do likewise.

In time, Andrew Breitbart might have aged into greater self-control and a higher concept of public service. Premature death deprived him of the chance at redemption often sought and sometimes found by people who have done wrong in their lives and work.

And this is where it becomes difficult to honor the Roman injunction to speak no ill of the dead. It’s difficult for me to assess Breitbart’s impact upon American media and American politics as anything other than poisonous. When one of the leading media figures of the day achieves his success by his giddy disdain for truth and fairness—when one of our leading political figures offers to his admirers a politics inflamed by rage and devoid of ideas—how to withhold a profoundly negative judgment on his life and career?
Especially when that career was so representative of his times?

We live in a time of political and media demagoguery unparalleled since the 19th century. Many of our most important public figures have gained their influence and power by inciting and exploiting the ugliest of passions—by manipulating fears and prejudices—by serving up falsehoods as reported truth. In time these figures will one by one die. What are we to say of this cohort, this group, this generation? That their mothers loved them? That their families are bereaved? That their fans admired them and their employees treated generously by them? Public figures are inescapably judged by their public actions. When those public actions are poisonous, the obituary cannot be pleasant reading.

Frum’s diagnosis of the malady: “Just as all is fair in a shooting war, so manipulation and deception are legitimate tools in a culture war” reminds me of the thought I tried to express here (Be careful what you believe) about political animals demonising their ‘opponents’ as engaging in such underhanded tactics that, in their minds, it justifies their own underhanded tactics …

Breitbart was a toxic influence in my view — not just because he wanted to ‘tear down the old media guard‘ but because he wasn’t truthful.

But then, I can just hear him saying ‘FFS, I’m not a journalist.’