The challenge of hosting contentious discussion on the interwebs — when some people want to shut you up ... and shut you down (click)

An interesting discussion has started about discussion forum PropertyTalk in the comments thread of my post about Linking to sources and the Sean Wood case study.

Two of my favourite PropertyTalk (ex) posters poormastery and exnzpat kicked it off last night in response to comments from Perry … with some pretty strong opinions… PT moderator Quentin/cube climbed in, and so did I … then this morning, a follow-up comment from poormastery is, I think, worthy of promotion to a post (I’ve left it out of ‘blockquote’ for legibility):

I will accept that the propertytalk.com owners and monitors collaborated with the spruikers because they felt that they had no choice.

This plot reminds me of one of my favourite novels – La Peste (The Plague) by Albert Camus. I recommend it to you.

Although the book is superficially about a plague in Algeria, it is also at an allegorical level about French collaboration and resistance to Nazi occupation during World War II. Camus himself was an important member of the French resistance.

“The plague comes unannounced and may strike down anyone at any time. It is arbitrary and capricious, and it leaves humans in a state of fear and uncertainty, which ends only in death. In the face of this metaphysical reality, what must be the response of individuals? Should they resign themselves to it, accept it as inevitable, and seek what solace they can as individuals, or should they join with others and fight back, even though they must live with the certainty that they cannot win? Camus’s answer is clearly the latter… Rieux argues that one would have to be a madman to submit willingly to the plague. Rather than accepting the natural order of things — the presence of sickness and death — he believes one must fight against them. He is aware of the needs of the community; he does not live for himself alone. When Tarrou points out that “[his] victories will never be lasting,” Rieux admits that he is involved in a “never ending defeat,” but this does not stop him from engaging in the struggle.”

Although Camus considers revolt to be the ideal, he is quite forgiving of the allegorical Vichy collaborators in his book. Indeed, Jean Paul Satre, Camus’ philosopher friend, barely spoke to him again after reading the book, so enraged was he by this treatment.

In my view, Camus was correct on both counts.

Finally, I am willing to accept your point that propertytalk.com probably did some good work before the subsequent surrender and complete capitulation.

I conceptualise what you label ‘forgiveness’ in this case as empathy (my word for 2011) or understanding … the very same thought. It doesn’t ease the disappointment at times.

And of course, there’s a terrible ‘meat in the sandwich’ dilemma for PropertyTalk owners and Moderators. I saw this when I observed the high pressure campaign the United Federation of Property Spruikers commenced last year to convince PT it needed to ‘clean up its act’ and censor ‘certain posters’ and threads even more aggressively (leading to the sad denouement: “Why are we making these changes….because we have to – to avoid litigation”).
I commented on that here:

A mind-expanding interchange illuminates another side of this
A friend emailed this morning, telling me that one of the odious spruikers whose activities I’ve discussed in that forum had burst a blood vessel and spat the dummy — with me as his target.

… But of more relevance to the topic of this post, were his trenchant criticisms of the Moderators of the site for allowing me (Peter) to allegedly lead an ‘orchestrated campaign of derision’ and to ‘disrespect’ him. Oh dear. (Yes, using disrespect as a verb is ghastly, but let it go.)

On the topic of negative opinions about the value of PropertyTalk, and pressure brought to bear on the site to censor ‘certain posters’ …. it seems even the advertisers are not above castigating the site and its management, nor knocking it (in terms even more strident than your own, poormastery):

By the look of things Quentin/cube the Moderator, perhaps seeking a ‘balancing view’ was subjected to a bit of PT abuse (and intimidation?) Look at this message from MUFFIT … apparently one of Sean Wood’s pseudonyms — a sock-puppet through whom I have observed him sometimes posing as his own satisfied customer and also attempting to anonymously lambaste me for my occasional comments on PropertyTalk. (Tacky.) 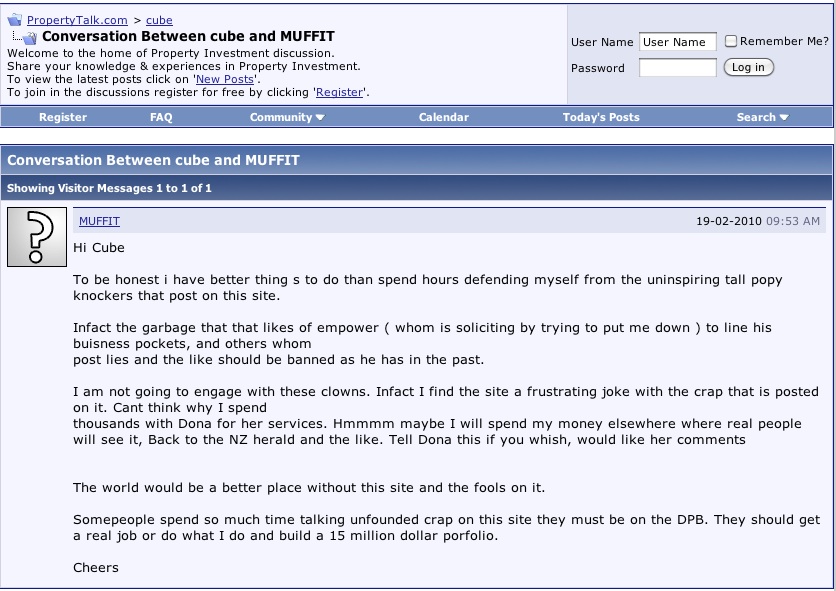 MUFFIT 19-02-2010 09:53 AM
Hi Cube
To be honest i [sic] have better thing s [sic] to do than spend hours defending myself from the uninspiring tall popy [sic] knockers that post on this site.

Infact [sic] the garbage that that likes of empower ( whom is soliciting by trying to put me down ) to line his buisness [sic] pockets, and others whom post lies and the like should be banned as he has in the past.

I am not going to engage with these clowns. Infact [sic] I find the site a frustrating joke with the crap that is posted on it. Cant think why I spend thousands with Dona [sic] for her services. Hmmmm maybe I will spend my money elsewhere where real people will see it, Back to the NZ herald [sic] and the like. Tell Dona [sic] this if you whish, [sic] would like her comments

The world would be a better place without this site and the fools on it.

Somepeople [sic] spend so much time talking unfounded crap on this site they must be on the DPB. They should get a real job or do what I do and build a 15 million dollar porfolio. [sic]

Gee, poormastery, and I thought your judgement of PropertyTalk was a bit harsh! MUFFIT thinks “The world would be a better place without this site and the fools on it.”

Less than a month later, the record shows, the new ‘Clean up PropertyTalk’ rules were in place (…”to avoid litigation”) …. and a number of ‘certain posters’ were, not actually banned as MUFFIT suggested, but consigned to the Moderators’ Watch list, a purgatory where their posts are individually screened before being published (if, in fact, they are ever published) — which is, I seem to recall, the same treatment that prompted you to end your association with the forum? It certainly has had that effect on other posters whose contribution I valued.

Now, as I stated earlier and you agreed, PropertyTalk has done a lot of good, and I continue to support it. It’s just very conflicted.

The wholesale ex-Sponging (removal) of whistle-blowing threads about spruikers and their sales techniques (including all-time-high the Richmastery thread) — conversations which had already been carefully groomed by the Mods and been in the public domain in the finest traditions of Web 2.0 ‘user-generated content’ — severely damages the forum’s credibility, in my view. (I’m not the only one | who thinks that.)

It doesn’t DESTROY it, as some suggest, but it is a challenge. Read this parable.