The sort of spruiker who gives spruikers a bad name

My hero Neil Jenman shares his experience with an Australian spruiker …
Interesting about the tie-up between Steven Fagan, his book ‘Accidental Millionaire’ and Carly Crutchfield. Have a read: 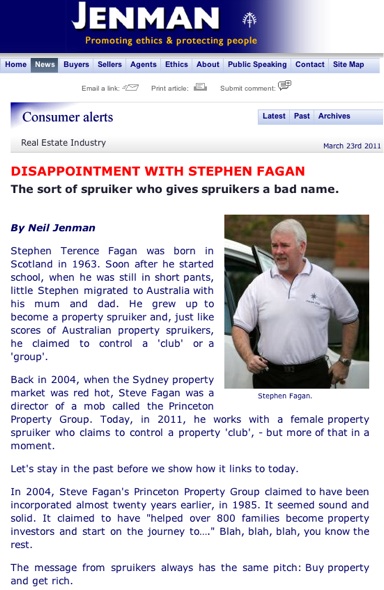 Nick and Wendy are a delightful young couple. In 2004, after advice from Fagan’s property group, they purchased an apartment in the western Sydney suburb of Blacktown. They paid $325,000.

Three years later, in 2007, Nick and Wendy were buckling under the strain of their investment property. It was costing around $1,300 a month to hold the property. When they made enquiries about selling, they were told that the apartment was worth around $230,000, almost a hundred thousand dollars less than they paid for it three years earlier.

Nick and Wendy contacted me, Neil Jenman, and asked for my help. I contacted Steve Fagan and asked him to discuss Nick and Wendy’s case with me. When I met Steve, he told me that he was most “concerned” to hear that some of his customers were not happy. We also discussed his book and I pointed out the many errors in it. Fagan said he was shocked that his information was so wrong but he agreed to never make such claims again. That was a decent and proper thing to do.

As for Nick and Wendy, well, Fagan had a simple solution: he would buy the property back from them for the price they paid for it ($325,000). He would also refund all their expenses. What a good man. At last, I thought, maybe I have met a decent spruiker. …

Other references to Neil Jenman on thePaepae.com
– P