« Won’t somebody, please … think of the editors?
“You just feel kind of satisfied with your products, and then you die.” »

Piercing the veil. Why I think Martyn is a bully. 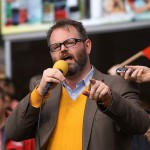 A couple of years ago, in a post ‘Bradbury: Martyr or moderated troll?‘, I declared this about Martyn Bradbury:

Let me be clear about my own opinion of Martyn: I think he is a sloganeering polemicist. He is also, in my personal opinion, a devious smear artist who hysterically espouses extraordinary anti-democratic ‘positions’, [see On a collision course] and wages ‘war’ on people he regards as ‘enemies’. In my observation he seeks to denigrate and libel his political opposites (of which I am not one) while dressing in left wing, liberal, culturally appropriate ‘clothing’ as if he were a politically-switched on version of comic Te Radar (he wishes!)

Yeah, OK, that’s pretty harsh. Despite occasional flashes of cooperativeness and some good MC performances around the anti-GCSB bill campaign (pic), it seems to me Martyn has become even more shrill and, by appearances, only more bitter in protecting his ‘patch’ since I wrote that.

Last night someone directed me to a post at Martyn’s Daily Blog where he set out to attack a couple of fellow bloggers — in fact, former contributors to his latest left-wing new media project.

At times it seems to me that Martyn aims to out-oil Cameron Slater’s often nasty attack blog. These two, Cameron and Martyn, sadly appear to be two sides of the same dysfunctional coin with their (how many ways can I say ‘petulant and nasty’?) approach, often smearing and/or denigrating people one might have supposed were on their ‘side’. (Yes, the irony is not lost on me.)

Cameron Slater has a tactic (a filthy habit) of trying to reach into people’s real lives as ‘retribution’ for their online opposition to him or his heroes and heroines.

As I have recounted (details in the Bradbury post above), when ‘bested’ or even just challenged in an online discussion/argument/confrontation, Cameron will publish posters’ real names, email addresses, places of employment — their identity, in other words. (Forget any assurance his website may offer about ‘Your email will not be published’.) Cameron threatens to and has formally complained to his cyber-antagonists’ employers (or called out to his ‘army’ of perspiring keyboard warriors to do so) —  trying to impose a real world ‘penalty’ for an online disagreement. It is loathsome.

Now it seems Martyn Bradbury is doing the same thing.

The post that I read last night (I won’t link to it because, well, he’s just being an arse) published the real name of a moderately prominent and very talented essayist/blogger/twitterer whose work I respect (not uncritically*).  We’re not pals, have never met, but I’m twitter buddies with her fiancé. She has, as long as I’ve been aware of her, used a consistent pseudonym. That’s her choice, and I respect that. As I say, her ‘output’ is often very good (read as: ‘Makes me think’.)

From context, some of her readers will be aware she is a public servant and, roughly, where she works. But (like me), most wouldn’t have known her name — and what business is that of ours anyway?

Martyn Bradbury, apparently for no reason other than to victimise, intimidate or ‘punish’ her, used her real name in his post. In effect, Bradbury has attempted to ‘out’ her pseudonym, to create real-world negative consequences, and imply/threaten/create workplace drama for her.
As such, by making her ‘engagement’ with him, her criticism of him an issue which could raise her profile in a negative way, he is, it seems to me (and I could be wrong) trying to silence her.

* e.g. I recall she got a bit protracted once smacking down a mate of mine online over his referring to Opposition women MPs giving an appearance of having more courage, conviction, guts and willingness to fight the good fight than many of their male colleagues. He said they had ‘more balls’ or something like that. Now I know exactly what he meant, he was praising them. He’s a thoughtful guy and not a sexist pig. But NBD.