A tale of woe … or fevered imagination? 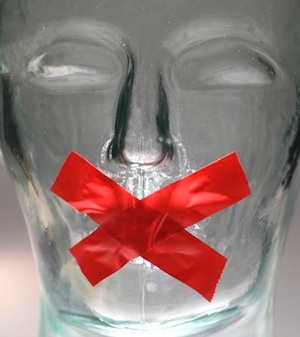 "Silence my critics or I'll sue you!" (image:http://justbkuz.wordpress.com)

The vast majority of the world’s population will NEVER visit an online discussion forum. They don’t care. (More important things to do etc.)

Those who do (visit, and care) can be divided into a few categories from lurkers (who look but don’t post) to occasional and regular posters, to fanatical networkers and naked self-promoters who seem to be always on the forum, popping up all over the place. (This is not a complete list.)

As I noted earlier, an excitable man who apparently thinks I’m persecuting him, launched into a vitriolic tirade against li’l ol’ me on a discussion forum over the weekend — accusing me of ‘orchestrating’ a very clever dirty smear campaign against my ‘rivals’, driven purely by commercial gain.

According to him I (Peter) was personally leading the charge, and driving a network of other posters to clobber my ‘competitors’ and spread derision and disrespect etc etc etc … (I’ll spare you the details.)

In a moment of lucidity the complainant admitted himself he was ranting (gee, d’ya think?) — and it’s been all taken down by the forum Moderators who, like me, probably felt sorry for the guy making such an arse of himself in public.

Later, in a calmer tone but still apparently seething, he popped back up to portray the forum as a ‘cesspit’ riven by orchestrated smear campaigns setting out to deride competitors for commercial gain… yada yada yada — without naming me this time. Lesson learned I guess.
Of course, as noted, I find his ‘complaint’ greatly overstated, almost hysterically so.

Best line: ” … some of the smear campaigns in here have been very clever and well crafted smear smear [sic] campaigns (that deride others) while seeming to be in public interest.”

Here’s my point of view:

A discussion forum is a democracy. Posters stand or fall on the quality of their information and their expression of ideas. No-one is ‘owed’ respect. I have my detractors. So does anyone who posts.

Go ahead, criticise. Make a case, be as ‘negative’ as you like — best leave character attacks and hallucinations about ‘motivations’ out of it — just the facts, as strongly as you like and present the evidence to illustrate or support your point of view.

To lament ‘disrespect’, or bellyache about ‘derision’ and paint an imaginative picture of a conspiracy co-ordinated by ‘totally unethical’ people ganging up to ‘smear competitors for commercial gain’ is implausible in the extreme in my honest opinion. (I’ve always favoured chaos theory over conspiracy theory as an explanation.)

To take it a step further, as this rooster did, and claim he has legal advice (with screen shots!) that labels discussion and sharing one’s opinion in the forum ‘illegal’ (as if that is somehow a proven fact) sounds like an attempt at a joke, or McCarthy-esque intimidation, or perhaps an overwrought reaction to criticism.

ANYONE who posts comments on an internet discussion forum runs into criticism and detractors. (Hello?) Sometimes people make fun of each other (or try to and fail). If it upsets you so much, start your own forum with your own rules and post there…

A defamation action is not so straightforward or black-and-white as threatening bully-boys suggest … and, to be frank, legal opinions are a commodity for sale and purchase. I have legal advice to that effect. [snort]

And on the subject of defamation, both the complainant in this case and I … and plenty of others … have been comprehensively smeared and slandered by an enthusiast (both before and after my copyright action against him). He smeared us all in the most trenchant terms, using colourful, emotive and ridiculous language, with no apparent regard for the truth or fairness — lashing out in anguish (a little like the complainant?)

Nothing as bad as that is occurring in this discussion forum it seems to me (well, until the weekend), yet the complainant is moaning… and now threatening legal action, perhaps, by the sound of it. Certainly he’s rattling his ‘legal advice’.

Elsewhere on the internet it’s the Wild West — in the pursuit of ‘page impressions’, some ad-supported discussion sites let it all hang out, applying the lightest touch of ‘moderation’, if any. Look around.
The complainant should get outdoors more and learn not to fixate so.

The spin he’s selling: that the issue is ‘competitors bashing each other for commercial gain’ is, to put it mildly, unconvincing. It speaks to me of someone unable or unwilling to engage in the sometimes robust (but perfectly legal) to and fro of discussion — or unable to cogently argue the facts without getting emotive or aggressive.

One of the noble Moderators of the sandpit/cesspit/discussion forum put it eolquently:

This does not mean that you cannot be critical or ask questions of a company’s or person’s actions or activities – however you need to provide evidence for critical comments, and make them in a civil, well mannered fashion. Making allegations without providing evidence is inappropriate. Robust questioning conducted appropriately is permitted – since this is a property discussion forum the discussion of property related companies and personalities are a fair topic of discussion – as long as it is conducted well.

Well said David. A debate doesn’t have to be a dirty bunfight. It shouldn’t be.
… but we don’t have to lobotomize the forum or cave in to bullying threats either.