« Europe: the ‘you have to act quickly’ sales pitch?
Wishful thinking about MMP. From both sides of the debate. » 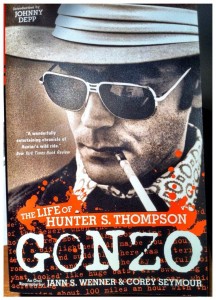 I’m reading this oral history-style biography of one of my heroes, Hunter S. Thompson which I picked up at Real Groovy in Queen Street last weekend. Good book.

I’ve been reading Thompson since being astonished by Fear and Loathing in Las Vegas in the late1970s. I always found his writing worthwhile, particularly his political reportage — he shared insight and acute observation, laced with personal invective, diatribe and condemnation that I could never hope to, or want to, emulate … although my recent comments juxtaposing a local politician’s apparent loss of let’s say ‘composure’ with preparation for a medical procedure may have mildly approached Thompson-esque imagery, unintentionally. Apparently.

I read cartoonist/collaborator/co-conspirator Ralph Steadman’s wonderful tribute/memoir about his time with Thompson The Joke’s Over, when it came out after the Doc’s suicide, with sadness. Of course, Gary Trudeau’s Doonesbury character Duke has kept those of us who’ve cared to be reminded of a slice of Hunter S. Thompson’s special talent.

Here, from his 1994 Rolling Stone obituary of Richard Nixon — a must-read for any political journalist or student of writing (read it here at The Atlantic archive) — is a slice of what I call Thompson’s reason-behind-the-rage:

If the right people had been in charge of Nixon’s funeral, his casket would have been launched into one of those open-sewage canals that empty into the ocean just south of Los Angeles. He was a swine of a man and a jabbering dupe of a president. Nixon was so crooked that he needed servants to help him screw his pants on every morning. Even his funeral was illegal. He was queer in the deepest way. His body should have been burned in a trash bin. ….

Some people will say that words like scum and rotten are wrong for Objective Journalism — which is true, but they miss the point. It was the built-in blind spots of the Objective rules and dogma that allowed Nixon to slither into the White House in the first place. He looked so good on paper that you could almost vote for him sight unseen. He seemed so all-American, so much like Horatio Alger, that he was able to slip through the cracks of Objective Journalism. You had to get Subjective to see Nixon clearly, and the shock of recognition was often painful.

We’ve discussed the failure of the ‘master narrative’ of news journalism before — what’s optimistically labelled ‘Objectivity’. It’s an illusion to pretend to be objective ‘uninfluenced by emotions or personal prejudices’ or without opinion, but one can/must/should be (and be seen to be) FAIR — see my posts The new breed of journalist-commentator and Do your opinions invalidate your reporting? from last year, prompted by issues around Michael Hastings and David Weigel and New media – it’s not about being impartial from earlier this year.

Those prior discussions, in my view, recognise the reality (yeah, that’s a loaded way of saying it, I know) of this guidance Journalism prof Jay Rosen quoted from Voice of San Diego‘s guide for reporters:

There is no such thing as objectivity. There is such a thing as fairness. But everyone sees everything through their own filter. Acknowledge that, let it liberate you. Let it regulate you. … If someone calls you biased, don’t be scared. Don’t dismiss it either. Reflect on it and answer with conviction.

Indulging in distortion or misstatement — whatever platform you use — are actions. They are challengeable, as I reflected here:

Holding an opinion based on your observations, thoughts and experience — and stating it — well, that’s different.

I’ll have more to say on this, and the related subject of ‘media bias’ later. What do you think?