Another stab at big-O objective journalism/media 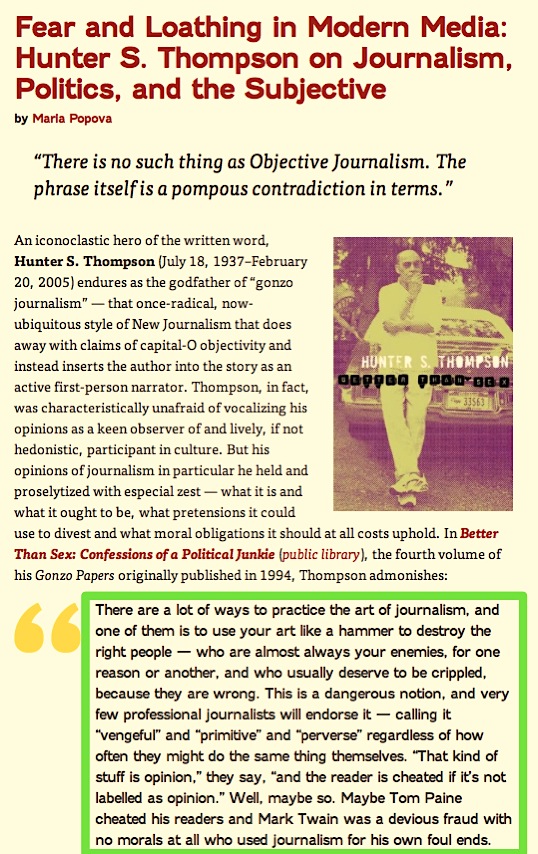 I was a fan a Hunter S. Thompson long before I got into journalism — I read Fear and Loathing in Las Vegas while I was still at high school, back in the days when I was listening to Pink Floyd’s album Meddle in what might be called ‘an altered state’ (this is all true).

I loved him for his courage, for the excellence of his writing, its corrosive strength and its punch. He made stuff up without lying. His political campaign books were eye-opening and his obituary for Richard Nixon (and the fact it was published!) astonished me … but it felt ‘right’. It felt like he was peeling back something — exposing a papering over, and the tame, establishment media had been part of the wallpapering. He burned it off.

Charles P. Pierce writing The Daily Politics Blog in Esquire, is a good current-day example of that kind of work.

I shared then and share now Thompson’s nauseous scorn for the myth or pretence of ‘big-O objectivity’ … and his febrile outrage at liars in print — or, online now, I guess.

This, from my post Gonzo, when I read HST’s biography in 2011, still stands:

“We’ve discussed the failure of the ‘master narrative’ of news journalism before — what’s optimistically labelled ‘Objectivity’. It’s an illusion to pretend to be objective ‘uninfluenced by emotions or personal prejudices’ or without opinion, but one can/must/should be (and be seen to be) FAIR — see my posts The new breed of journalist-commentator and Do your opinions invalidate your reporting? from last year, prompted by issues around Michael Hastings and David Weigel and New media – it’s not about being impartial from earlier this year.

Those prior discussions, in my view, recognise the reality (yeah, that’s a loaded way of saying it, I know) of this guidance Journalism prof Jay Rosen quoted from Voice of San Diego‘s guide for reporters:

There is no such thing as objectivity. There is such a thing as fairness. But everyone sees everything through their own filter. Acknowledge that, let it liberate you. Let it regulate you. … If someone calls you biased, don’t be scared. Don’t dismiss it either. Reflect on it and answer with conviction.

Indulging in distortion or misstatement — whatever platform you use — are actions. They are challengeable, as I reflected here: