« A wittle bit of hyperbole? Or not?
Media bias: In the eye of the beholder »

A dignified response to Labour’s complaint

I don’t want to get into the argy-bargy about the Prime Minister’s hour on RadioLIVE last Friday. I listened to it and enjoyed it. Good to hear John Key reading the weather and being a gushing fanboy interviewing people he looks up to. He does it well.

I saw Mr Key copped a bit of ‘fiddling while Rome burns’ flack, and RadioLIVE (inevitably) came under criticism too — with assertions the show ‘undermined RadioLIVE’s credibility’ from RNZ’s Mediawatch. Their argument, as far as I can make out, being that because the PM didn’t instantly address the ‘breaking news’ of a second credit rating agency downgrade — but waited until the hour-long show was complete to do so — that was somehow a Very Bad Thing …? I don’t get it. Nor do I understand the basis for their claim that the station had somehow, for that hour, given ‘editorial control’ over to the PM. Rubbish. 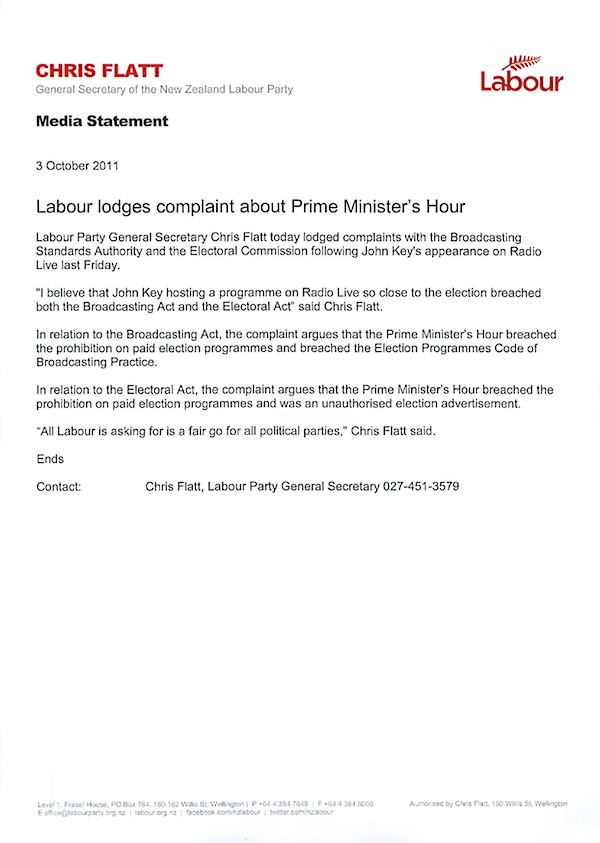 Rachel Lorimer, a spokeswoman for RadioLIVE’s parent company Mediaworks, said care had been taken to ensure the show was neither election programming nor election advertising.
“The Labour Party is entitled to ask regulators to check we have acted lawfully,” she said.
Mediaworks wouldn’t comment further while that process was underway.