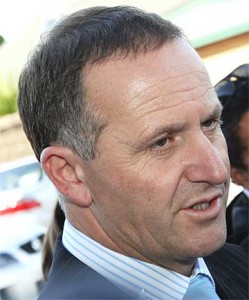 Is this John Key's preferred style of media conference? A stand up outside the offices of RadioLIVE, Sept 2011. (Photo Phil Doyle, Fairfax)

Wow, you can see why some people might see this as avoidance behaviour.

I said the other day

If Mr Key and his colleagues were more confident of the news media I think you would see more willingness to appear in ‘hard’ interview situations (rather than the photo ops and stand ups) and less of ‘The minister was not available to appear on our programme’ … which I hear A LOT.

“the cultivated political absence that shapes the almost unprecedented popularity of John Key. The Prime Minister does not appear on Morning Report and only rarely on either of the main TV current affairs shows.”

Indeed. And, bugger it, it’s working for him. He doesn’t need them or the aggro. It’s not (yet) compulsory to be interviewed by Mary Wilson.

Meanwhile, questions have also been raised about how Mr Key divides his time between different radio stations.
While Mr Key does regular spots on commercial stations Newstalk ZB and Radio Sport, public broadcaster Radio New Zealand said it had had difficulty getting the Prime Minister to appear.
The station said it made regular bids to interview Mr Key on its Morning Report and Checkpoint programmes but most were declined. Of the 184 Morning Report programmes this year, Mr Key had agreed to be interviewed in 10.
Mr Key had been interviewed on Checkpoint five times this year, with his last interview on the show in June.

What’s up, do you think? Political marketing, Crosby|Textor style? Or something else?

The National Party put this photo on their Flickr stream…. (I googled ‘John Key media scrum’.) 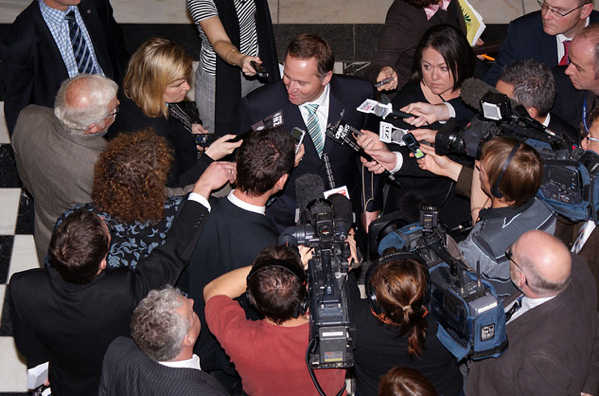