You’re an activist? That shows that you care about something 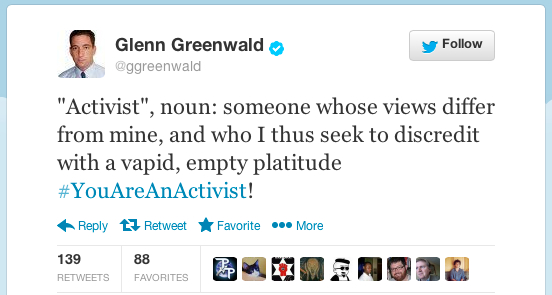 Yeah, I can see where Glenn Greenwald is coming from, if a little defensively. It’s so easy to sling off at somebody (‘You’re not a ‘real’ journalist, you’re an activist’, was the dismissive implication in Greenwald’s recent ‘dialogue’ with the NY Times‘ Bill Keller — full article here) but that’s not how I see activists.

It is unquestionably true that people in ‘the power elite’, elected officials/office holders/bureaucrats etc and their enablers in the media routinely disparage ‘activists’ as zealots, enthusiastic amateurs or single-issue nutters, and whatever else they can think of. Same with whistle-blowers.

Indeed, it’s normal for those in a bureaucracy to dismiss, sanction or otherwise attempt to stifle or discredit the outspoken — those whom they characterize as oddballs or whistle-blowers — or far too ‘committed’.

Conformity is by definition a narrowed path, and often passionless.

In most organisations (public or private sector) sticking to ‘procedure’ is encouraged and rewarded. Toeing the company line is de riguer, obligatory. Even if, as we have discussed, sometimes it means doing the ‘wrong’ thing the ‘right way’. That’s seen as defensible.

The courage to speak up

I have always seen people who give a damn (whatever their issue) as worth something … and their voices worthy of being heard — whether I necessarily agree with them or not.

What’s referred to so readily — free speech or freedom of expression — is a two-sided coin if ever there was one.

Freedom of speech is not the same a freedom from the consequences of one’s statements of expression. I’ve copped it for being outspoken at times, and while I’m not an overtly religious person, this speaks to me:

A man dies and comes before God.
God: “Where are your scars?”
“I have none.”
“Why? Was there nothing worth fighting for?”
— David Wolpe

It’s also the law of the land that some expressions, or disclosures of information are ‘protected disclosures’ which makes it a criminal offence to persecute informants. (I’ve had reason to look at this recently. See my post ‘The challenge of dealing with a whistle-blower‘ which also, coincidentally cites Greenwald.) I don’t think it covers radio talkback hosts.

I am, naturally, a long way short of justifying the [corrupt] Putin-regime’s brutal persecution of band members of Pussy Riot for daring to criticise him … but I’m actually OK with the way local Radio LIVE recently removed Willie Jackson and John Tamihere from their afternoon radio slot — even though as I have said, Willie & JT’s political panel was one of the best things on that station (in my opinion).

The action of Radio LIVE’s management to sanction the two radio hosts followed fiery public debate about rape apologetics/rape culture (at its worst, characterised by offensive ‘She was asking for it’-type justification and victim-blaming). The opprobrium directed at these two ‘personalities’ and community leaders, sparked by their treatment of a young woman talkback caller, was fierce. Fair enough.

The NZ Herald‘s media writer John Drinnan says Willie & JT are unhappy about that. Understandable. While I sympathise‚ something had to give, and they had become a lightning rod which endangered the whole station — not just the advertiser boycott — and the image of Mediaworks.

I was working at Radio LIVE when then morning talkback host Michael Laws ‘suggested’ on air that somebody should go to the NZ Herald with a shotgun and clean out the entire newsroom. It wasn’t a fun time to be a reporter for Radio LIVE, I can tell you, so I have had sympathy for those in the wider Mediaworks ‘family’ who have borne the stigma of these recent events and how the crisis is being handled.

But God knows the backlash flung at Giovanni Tiso for daring to email Radio LIVE’s advertisers and ask if they were happy to be associated with Willie & JT’s simply ghastly ‘interview’ of Amy and their subsequent mealy-mouthed ‘apology’ is ludicrous and some of it (e.g. Chris Trotter’s) just makes me gasp. Disappointing.

I don’t share that criticism of Giovanni Tiso. He was right to do what he did, in my view. Noble even. (And on that score, don’t get me started on Matthew Hooton! I have a daughter too. And a son. Good on you Matthew.)

Politicians and people in business, those working in the media etc pay attention to ‘public opinion’. You could say it’s what they’re paid for — ‘Finger On The Pulse Of The Nation’ stuff.

Media manipulators of every colour and stripe (not just corporates, entrepreneurs, activists) attempt to get their ‘issues’ highlighted. It’s a near-constant competition for attention … the currency of the internet age, as well as votes and dollars (same thing?)

Gaining attention, having one’s voice being heard, is the first step to one’s ‘issues’ being taken seriously, to have those issues seen as a ‘social problem’. (We’ve discussed this before in the context of policy analysis and the ‘fastest gun in the west’ — the race to ‘define’ what issues are regarded as a ‘social problems’, because that’s where the action is.)

Any opportunity to highlight one’s (or one’s stakeholders’ or clients’) issues should be taken, must be taken. That’s how it works. So it is with this issue.

Rape culture is past its use-by date

Let me be very clear: I think police mishandling of complaints of sexual assault, and the re-victimising of complainants is a disgrace and needs to change. Read the story expressed in a calm but gut-wrenching manner here (please read it): #RoastBusters: The Police Minister Is Right. It Is “Very Hard” To Whistleblow On Rape.

This needs to change.

These are issues that merit attention beyond token gestures and platitudes.

We can all find reasons why our opponents’ arguments are invalid. Knocking their very legitimacy is an easy first step, as Greenwald highlights above. Fobbing someone off as an ‘activist’ or a ‘Marxist’ or ‘Fascist’ or ‘Right Wong Nut Job’ instead of asking, ‘Gee, has she got a point?’

In olden times, when an area was unexplored or unknown, it would be characterised as dangerous and be shown on maps: “Here be dragons” or “That way lie monsters.”

But often the people, lands and arguments we don’t know yet because we haven’t explored them yet are not monsters. They’re just unknown.

That’s true for a mental landscape too. It’s far easier attack a person than investigate their arguments. A John F. Kennedy quote I’m fond of is this:

Too often … we enjoy the comfort of opinion without the discomfort of thought.

Yes, clearly, it takes far less thought to just stick to the status quo. Especially if, as for most (white) mainstream men, the status quo has been quite good to you.

Thank you Giovanni. Thank you Matthew.