When the brand is smokin’ hot …

You might remember my post ‘Talk about product placement!’ which featured President Obama demonstrating a new government health website on a MacBook Pro with the Presidential seal over the Apple logo…

Here’s today’s NZ Herald displaying no such coyness — in fact the article is about kids wanting Apple products for Christmas. (Enthusiastic consumers of trinkets just like their forebears.) 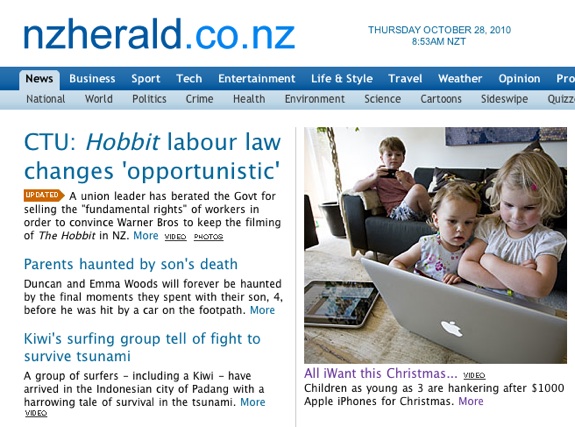 As I mentioned in the earlier post, I’ve used Apple gear for decades, when only a few of us regarded it as cool — although educators have long seen the benefits of the Mac interface. I suffered through the wilderness years when using a Mac was almost an article of faith that the company would pull out of its doldrums — but always fed by finding delight in the elegance, the flexibility, the future-looking-ness of the software, and the irrepressible ‘attitude’ of the Apple geeks, hippies and aesthetes.

Now Apple is custom-making their own silicon with the A4 chip in the iPhone, iPad, iPod Touch — and it’s game on. Good on them. Apple is a business that succeeds with vision, style and substance. Not perfect, but the best, in my opinion.