What the Chisholm inquiry revealed about managing the media narrative

Smile for the camera: Carrick Graham and Cathy Odgers photographed  in public together the day  after the Chisholm Inquiry report was released. Pic: Chris Gorman NZ Herald

Photographer Chris Gorman caught this image (above) of two of the Dirty PR conspirators putting on a brave face after the Chisholm inquiry report was published. NZ Herald journalist David Fisher referred to the report’s finding of an “extreme campaign against the former SFO boss Adam Feeley carried out by Slater and Odgers” in “a collective organised by Mr Graham, who was working for Mark Hotchin who was being investigated by Mr Feeley”.

At the heart of the allegations against Judith Collins which prompted the Chisholm inquiry is the idea that this “extreme campaign” was funded and carried out to influence and manipulate journalists and ‘the news media’ into serving a hidden agenda. That agenda, it’s been alleged, was to attack, demean and undermine the white collar crime bureau, the Serious Fraud Office (and, outside the terms of reference, also the Financial Markets Authority – see below) who were, as Fisher said, investigating Mark Hotchin.

Without falling too deeply down the rabbit hole, let’s examine those allegations, and see what light if any the Chisholm inquiry evidence sheds on it. Like many allegations, they may be true, partially true, or it could all be an urban legend. …

The evidence Nicky Hager presented in his book Dirty Politics of a political attack machine operated by Prime Minister John Key’s staff was one aspect. If you haven’t read the book, I recommend you do. As I have noted elsewhere, I am constantly surprised by people who express quite strong opinions about Dirty Politics and its author without the benefit of actually having read it.

I lent a copy to a new colleague who had uttered an (empty) violent sentiment towards Hager. After he’d read it, he told me he was shocked – he hadn’t been aware of “even ten percent” of what the book disclosed. He said he was particularly disappointed at Katherine Rich’s role and the apparently commercially-motivated efforts to smear public health campaigners and others.

My colleague didn’t realise that besides the political attack machine, another aspect revealed by Hager was the nasty, personal “hits” – the sleazy smear operation carried out on behalf of commercial clients, paying ‘the gang’ to achieve commercial outcomes.

Now, put like that, it sounds like that gangster-esque trope, “It’s nothing personal, Joey. It’s just business.” But it’s hard to overstate the personal impact on the “targets” of the campaigns of vile abuse; and also on their co-workers, and their families.

In his testimony to the Chisholm inquiry, Carrick Graham repeatedly sought to defuse the allegation that he had been involved in a cynical, commercially-motivated exercise (i.e. being paid) to plant stories in the news media that damaged the reputations of those investigating his client Mark Hotchin.

He described it as a “media rebalancing” strategy. Because we all know something being “out of balance” is undesirable, right? In some cases it could even be A Very Bad Thing.

But let’s think about that ‘balance’ idea – who measures “balance”? Mark Hotchin’s view of “balance” might be quite different to other people’s (as I am absolutely certain his lawyers were letting the NZ Herald know in a series of blood-curdling letters).
‘Balancing’ sounds so positive.

But what’s revealed about Carrick Graham’s supposed “rebalancing” strategy is that it amounted to a stream of abuse, denigration (some of it anonymous or pseudonymous), gossip and calls for the heads of the white collar crime agencies investigating Mark Hotchin to be sacked.

As part of the vitriolic campaign, Cathy Odgers – solicitor, newspaper columnist, blogger and ACT Party stalwart – decided (‘as a chick’) that she would publicly speculate on the size of the FMA boss’s penis, and how that related to his prosecution decisions. (“I’ve gone down the ‘small cock’ route here. As a chick I can do that,” she joked in an email, according to Matt Nippert’s Aug 2014 report All the financier’s men.) Somehow that was a topic chosen to ‘re-balance the media narrative’ around Mark Hotchin. Sure.

Here’s an extract from a statutory declaration Carrick Graham was asked to produce after his time on the witness stand at the Chisholm inquiry. It’s very clear the three of them were working for Mark Hotchin. 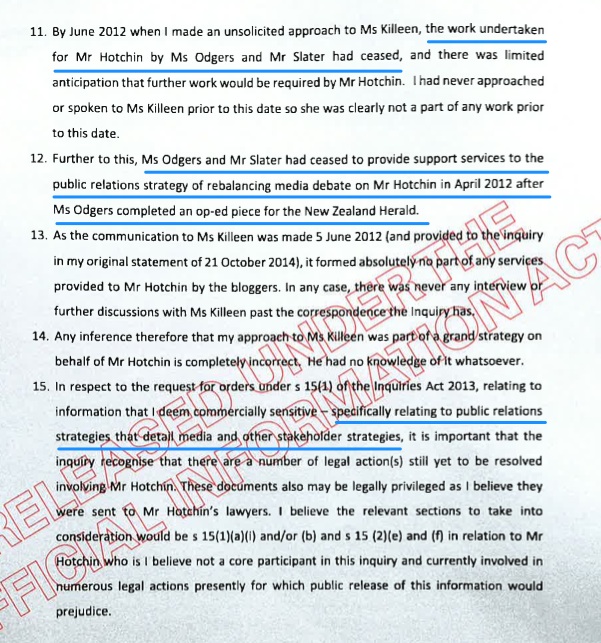 “Rebalancing the media debate” – gee, that sounds so much less offensive or ethically dubious than “smear campaign” or “deceitful media manipulation” eh, Carrick?

Notice that a part of that ‘public relations strategy’ appears to have been Cathy Odgers “complet[ing] an op-ed piece for the New Zealand Herald“. I’m sure everyone at the Herald would be thrilled to know Cathy Odgers was being paid by Mark Hotchin to place that undeclared advertorial and spin into their news organ.

In their enthusiasm to smear, crush and dispirit their targets, the deceitful dirty PR schemers also stooped at times to what I see as near-unfiltered malice, personal abuse and denigration. They would also whip up a chorus of online haters – or, as Hager showed, in cases use a handful of nasty sock puppets (pseudonymous social media profiles) posting derogatory remarks under a guise of inciting ‘debate’.

It was a deliberate scheme. Here’s an email between the three conspirators:

The goal, as I see it, was to create a false ‘mob’ effect, an appearance of public opinion. Here’s an example, from the comments section of a whaleoil post in which Graham probably, writing as Slater, lifted from Cathy Odgers’ blog, then added some bullet points and more abuse – this time aimed at denigrating Sean Hughes and the Financial Markets Authority … over the treatment of guess who? Mark Hotchin. 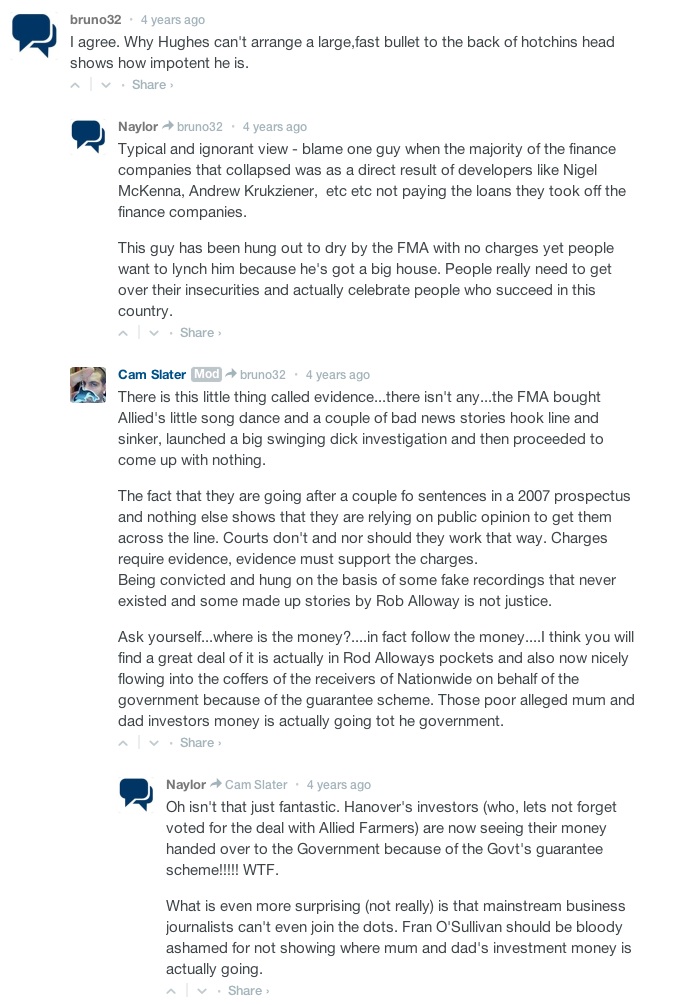 That was the PR strategy Carrick Graham engaged in, and tried to pass off as a legitimate business activity – “rebalancing media debate” — in discussions with the Chisholm inquiry. It’s foul in my opinion. Shabby.

Who is ‘demonising’ whom?

The game was all about pressure — how to exert it to make your target either strike back unwisely in anger, or STFU and withdraw from ‘the battle’.
In my personal (face-to-face) discussions with Cameron Slater, it became clear to me that he operates under a simpleton’s tribal mindset of ‘us and them’. We’ve discussed it before, so I won’t go into it in detail now about how this type of operator justifies their own foul dishonest dirty trickery by the certain conviction (in their mind) that “the other side is doing this sort of thing to us”. That’s the same sort of paranoia that led Nixon, a Quaker, to operate the dirtiest little brigade of wire tappers, burglars and saboteurs from the Office of the President of the United States using secret undeclared campaign contributions from business interests. (Simon Lusk seems to regard that as ‘more professional’ politics we should emulate. Oh dear. But we’ll come back to that.)

Is it effective? Maybe.
Here’s what Sean Hughes, former head of the Financial Markets Authority told Radio NZ about the impact of the scurrilous, protracted campaign of personal attacks: 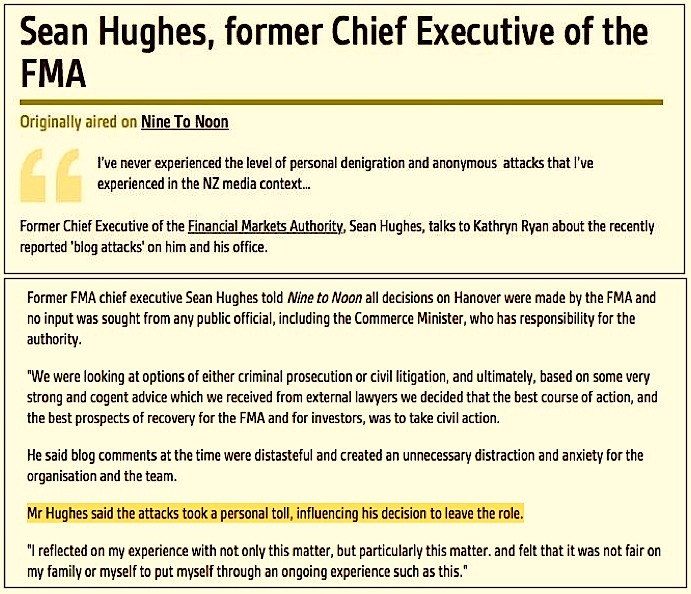 Do we expect, or pay for, heads of white collar crime agencies to put up with commercially-driven smear and denigration campaigns? How close is that to perverting the course of justice, do you think?

Is that a ‘win’? I guess Carrick Graham will be spinning it as a ‘scalp’. Maybe this series of articles here at The Paepae will end up in his skite book, trotted out to attract new business. Y’think?

How to sell your smear services

As noted, the [alleged] hacker Rawshark/Whaeldump released a tranche of documents in response to John Key’s vacuous suggestion that Nicky Hager had ‘made stuff up’.

To me, one of the most interesting packages was the dump labelled “Katherine Rich” which published evidence of Carrick Graham sending ghostwritten attack blog posts to Slater Jnr to publish word for word under the Slater byline.* Also included in that care package was a ‘Strategy’ document which was a sales pitch (unsuccessful? dunno) that Carrick Graham made to Nestle for his PR services. 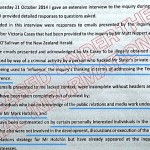 Note, Carrick Graham impressed upon the Chisholm inquiry in his statutory declaration referred to above how terribly “taken out of context” the “illegally obtained emails sourced by way of a criminal activity” were. But, given his almost total data loss in the period of interest to the inquiry (as discussed) well, what are we to do?

So … How does an operator like Graham pitch the business equivalent of ‘the politics of personal destruction‘? How does a salesman like him phrase the proposition, ‘I will smear your opponents through the media and social media’ without the rank sleaziness of that offer stinking like a dead fish? Let me show you.

First, it’s important that you don’t call a spade a spade. 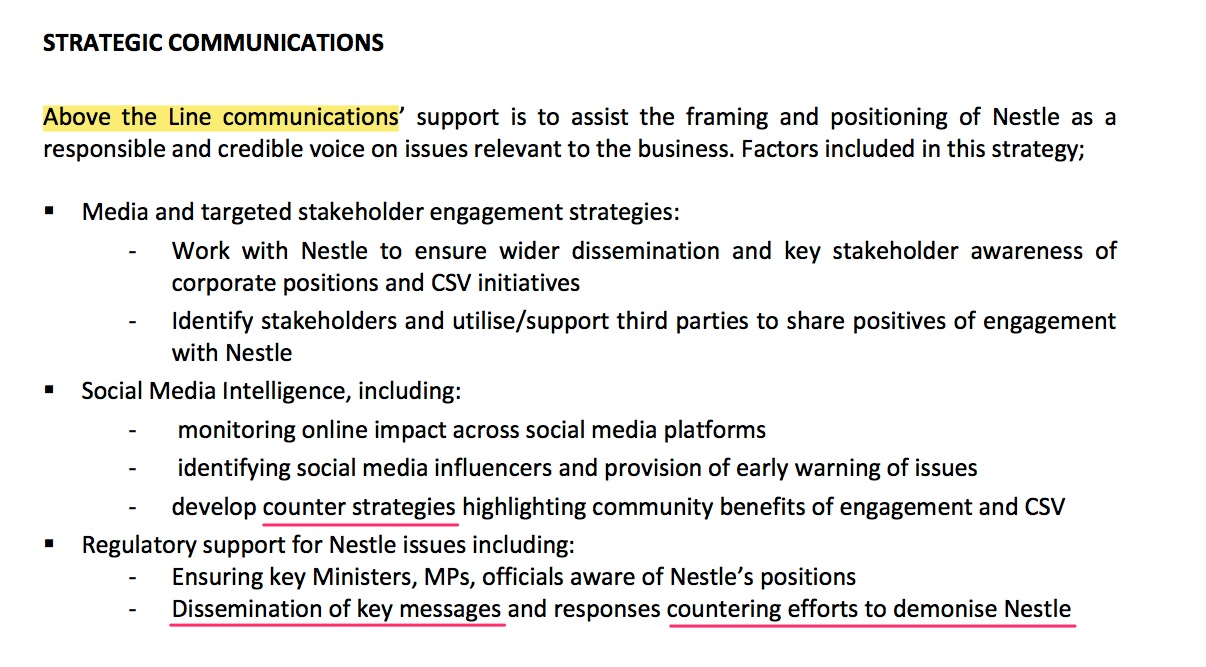 Whatever ‘below the line’ refers to, it seems hard to escape the impression that Graham’s proposal implicitly invited Nestle to act covertly and deceitfully – to pay him and his band of internet thugs to do ‘dirty tricks’ for them. If there’s a more innocent explanation for his use of ‘below the line’, I’m open to hearing it. What else could ‘below the line’ refer to? Any thoughts?

Also, Graham specifically refers to ‘Otago University’s Big Food symposium’ – which implies he’s had them on his ‘enemies list’ for a while, huh? More about that here: Carrick Graham, vendettas and miasma and follow the link on that page to read Peter Griffin’s views of Graham.

Also in the Nestle proposal, note Carrick Graham’s offer to disseminate “responses countering efforts to demonise Nestle“. Leaving aside the classic tactic of accusing your ‘opponents’ of the worst of your own misdeeds, ask yourself: Judging by what we’ve seen, who actually does the ‘demonising’ in this ‘debate’? .

Using an at-times orchestrated campaign on the Dirty PR attack blog run by Cameron Slater, it seems Carrick Graham sought to influence media coverage for commercial reasons. You can read more about all that for yourself when you read Carrick Graham’s redacted witness transcript and other evidence. (Available here.)

And the PM’s office?

The very last Chisholm inquiry document in the pile I received under the OIA was number 58 – notes reconstructing mandarin Sir Maarten Wevers’ testimony to the inquiry – notes rather than a transcript because of ‘failure of the recording equipment’. 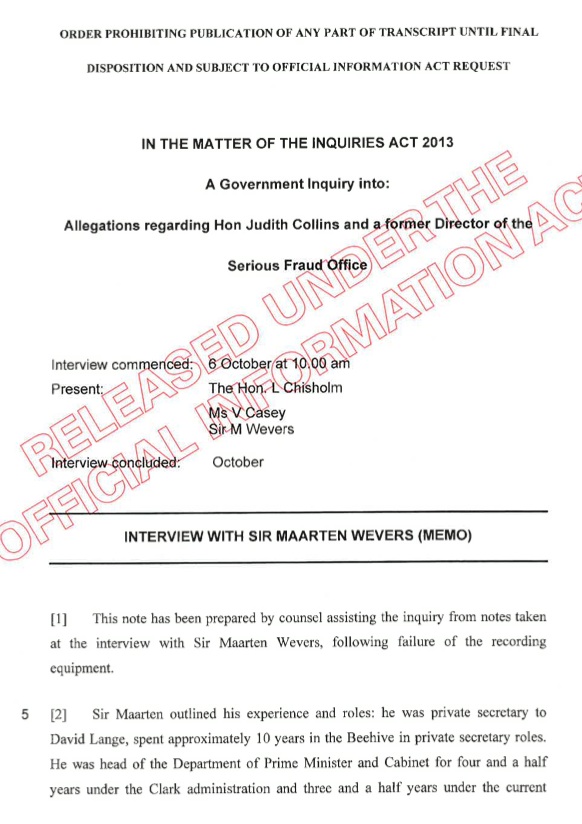 It’a a good read, at least the parts that we’re able to read. (The document is available here.) You can see from the thumbnails below that just as Wevers got onto the topic of the activities of the Prime Minister’s “media team”, his notes – groomed prior to release under the OIA – got comprehensively redacted. Gosh darn. Why would that be, do you think? 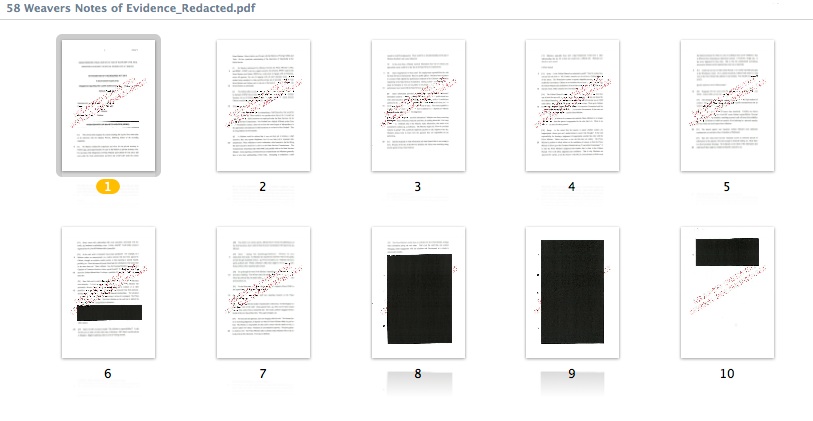 Maarten Wevers’ evidence to the Chisholm  inquiry got HEAVILY redacted towards the end – just when he started talking about media management in the PM’s office on page 8 . (Wot a surprise.) 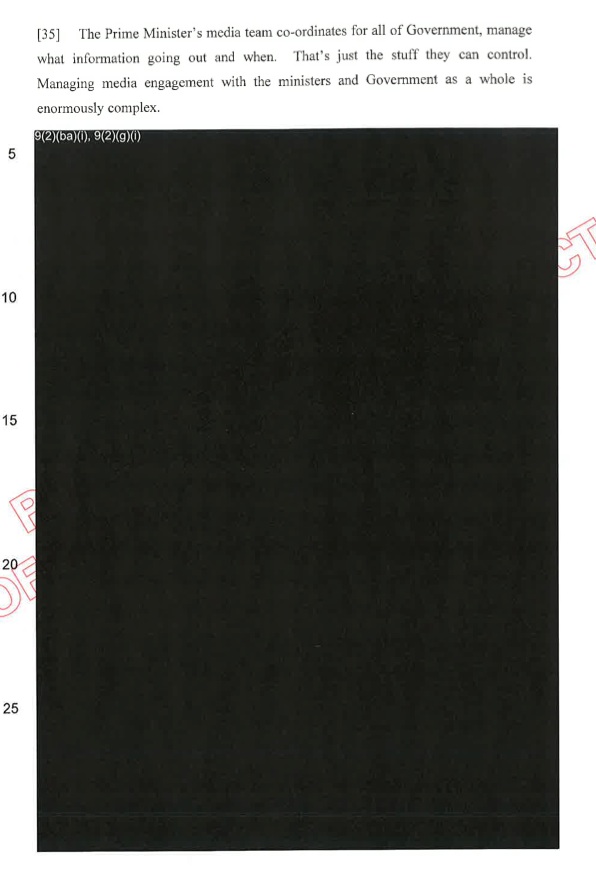 See? What can have been so sensitive, or potentially damaging, about that subject do you reckon?

So, rather than reading all about how Mr Key’s office “manages media engagement”, we’re left to speculate a little bit about what’s behind the black on those last three pages. Hmmmm.

But we’ll come back to that topic.

* Max Coyle, an occasional target of Slater Jnr’s spite, has hosted the entire Katherine Rich dump on his website: The Katherine Rich WhaleDump – Nestle, Countdown, Carrick Graham & Hamish Price which is instructive. Other links: The Dirty Politics Emails Images – The First Dump and The latest WhaleDump – The Hotchin Files