« Bryan Gould’s must-read on the changing face of John Key
What do you think? »

This is a very good cartoon

Tom Scott — as sharp as ever … 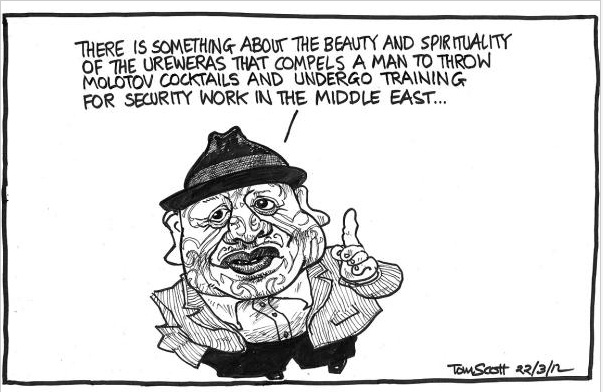 Yeah, it does sound implausible. But has the prosecution actually PROVED anything else? Because that's the test, y'all.

It’s a funny thing, the justice system. I worked at the Supreme Court when Arthur Allan Thomas was going through an ill-fated appeal of his 1971 wrongful convictions for murder. A scientist named Jim Sprott conclusively discredited the police ‘evidence’ that a shell casing they said they miraculously ‘found’ in a flower bed linked Thomas to the Crewe murders.

Sprott showed the shell casing had never been manufactured with slugs of the type found in Harvey & Jeanette’s bodies. So the police, Thomas’s defence implied, must have manufactured their evidence. (I could have said ‘planted it in the garden’, but that would be a terrible pun.) Nevertheless, Thomas’s appeal was still dismissed and he and his family had to wait until a Royal Commission exonerated him and he was released in 1979. How’s that for justice?

I don’t know what the hell was going on in the Ureweras, but to make it a crime, you have to prove it was.

(Thanks to Jacqueline Sperling for highlighting Tom’s cartoon.)