« Being Paul Henry
Well said, and good on you for speaking up »

There’s sometimes a price for HOW you state your opinions

No, actually, I’m not talking about Paul Henry. 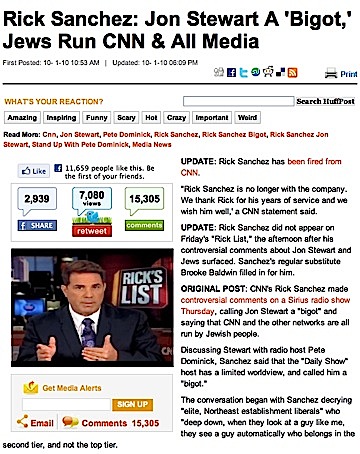 Over the weekend CNN anchor host Rick Sanchez was fired after a misguided book promo/radio show appearance turned into a rant where he accused The Daily Show‘s Jon Stewart of being a ‘bigot’ towards Hispanics, of working with the ‘north east liberal elite’ to keep ‘people like Rick’ in their ‘second tier’ place; and mocked the idea of Jewish people understanding oppression (given their history); … then re-heated the ‘the Jews run the media’ legend.

It seems Rick didn’t appreciate Stewart’s critique of his work as a broadcaster and CNN anchorman. Stewart had described him as an “over-caffinated control freak” — with video evidence to support his claim. Typical Daily Show fare … and a fraction of what other Stewart ‘targets’ have had to endure. Maybe there was more.

You can read and hear what Rick said (what seethed out of him) to host Pete Dominick here at Radio Sirius. This is a blog post from the Domimick’s brother, which reports the events.

The interview almost presents a case-study of burst ego and hurt feelings mixed with self-important I-love-the-sound-of-my-own-voice delusion. Sanchez calls himself ‘real and transparent’ several times while saying Stewart and Colbert’s shows “skewer people mercilessly” without regard for their targets’ feelings or their family members’ feelings. He says the shows have “transcended comedy” to become “now more important than Walter Cronkite”.

Now of course, Jewish people are just as capable of bigotry as anyone else. Or heroism. Or genius. Radio host Pete Dominick offered Sanchez the opportunity to back out of his dumb claims (he did retract bigot to prejudicial [sic]) but Sanchez came back with the logic-defying attack on Jews, and specifically in the media, ending with this ‘insight’:

“I can’t see somebody not getting a job somewhere because they’re Jewish.”

Hooo boy. Where do you start? Have you any sense of history, Rick?

…and he was subjected to the consequences of expressing that opinion. He stated his “opinion” poorly and offensively. There are a dozen different ways he could have shown his dismay of Jon Stewart and his supposedly “jewish” bosses, but to use the word bigot and to bring out the old “jews run everything” nonsense got him fired. His job is to field opinions and to so publicly throw his own narrow opinions casts doubt on his ability to perform his job.

From where I sit, Jon Stewart didn’t mock Sanchez for being Cuban. He mocked his performance on-air, which provided unintentional hilarity (the tasering was priceless, and a gift that kept on giving) and, thereby, fodder for the wags and wits at The Daily Show.

It’s the same as what I said here about discussion forums in response to someone bellyaching about ‘disrespect’:

A discussion forum is a democracy. Posters stand or fall on the quality of their information and their expression of ideas. No-one is ‘owed’ respect. I have my detractors. So does anyone who posts.
If I publish or say something ridiculous or patently false, I should anticipate ridicule and my false information to be pointed out.

Even more so cable TV.

Rick Sanchez seemed a giant self-important target. I didn’t know he was so thin-skinned. I kinda like him for having the wounded feelings, but not for losing it and his silly hallucinatory rant. Way OTT brotha.

Watch that video at The Daily Show and ask yourself: Didn’t he have it coming?