Note: Just this morning, 13 April 2015, while searching for a graphic in the media library of this blog to insert in a comment, I came across this post (below) in ‘drafts’ from July 2014. I have no idea why I neglected to publish it at the time.

Reading it again this morning, I found some of my comments about Cameron Slater’s role as a deceitful PR attack propagandist quite … intriguing, in hindsight – particularly the references to Carrick Graham, Jason Ede and Simon Lusk ghost-writing material published in Slater’s name. I’ve noted elsewhere that reading Nicky Hager’s book ‘Dirty Politics’ made me feel like one of the blind men describing an elephant from the parts he could feel. Look how close I was … – P

This week [see note above] the phenomenally successful news aggregator site Buzzfeed apologised to its readers and ‘let go’ writer Benny Johnson after it was shown Johnson had repeatedly “lifted phrases and sentences from other websites”. 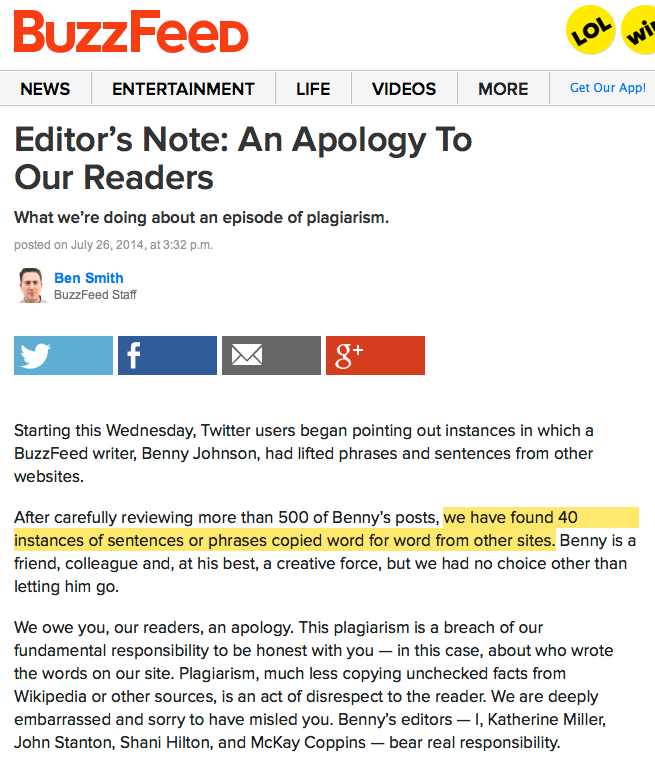 At first I thought it was a joke, given Buzzfeed’s … um, … demonstrated history (business model, even?) of — let’s be diplomatic here — re-purposing copy from other sources, then slapping on a ‘You’ll never believe what this boy scout found in Kim Kardashian’s trash!’-style headline in an effort to gather internet clicks. (A successful effort, to pay credit where it’s due.)

‘Buzzfeed’ and ‘click-bait’ are, it seems to me, two word compounds made for each other. It’s unusual for an enterprise (web-based or not) to make as large a cultural mark. Even if it is temporary.

Nevertheless, it is true, and Buzzfeed’s Ben Smith makes the point in his apology, that Buzzfeed has come a long way, journalistically, from its roots as …

“…a laboratory for content” employing “writers [who] didn’t have journalistic backgrounds and weren’t held to traditional journalistic standards, because we weren’t doing journalism.”

That last line, “ …[we] weren’t held to traditional journalistic standards, because we weren’t doing journalism” is, of course, a pure bullshit argument in much the same way that local PR attack blogger Cameron Slater claimed for years to be ‘not a journalist‘ (thus exempt from expectations of ‘traditional journalistic standards’) … but has grasped for a different interpretation of what he does now that he’s trying to avoid the identity of his clients — oops, I mean ‘journalistic sources’ — being exposed through the court discovery process in a defamation trial. 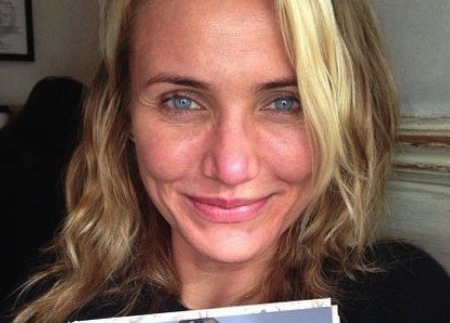 I’ve made the point elsewhere that *if* Cameron Slater can be shown to be a deceitful PR gun for hire … carrying out denigration campaigns for money or other exchange, and *if* he’s judged to have defamed the Auckland businessman currently suing him, such a finding may significantly affect any damages awarded. But that’s just speculation. (Read some background to the defamation case here: Part of the news media? or a “PR blog” dedicated to “destroying” reputations? and Target of Cameron Slater’s ‘campaign’ speaks up.)

Like any number of less-offensive parasite bloggers, Cameron Slater has, it seems to me, a track record as someone who takes liberally from other media sources, re-publishing their words and images — sometimes with scant, if any, acknowledgement — merely adding a sentence or two of ‘spin’ or spitting an insult at one of his many targets. He’s certainly he’s been accused of plagiarism or ‘stealing’ from working journalists. He doesn’t like that when it happens.

I quickly formed the view (back when I read his hate blog for research) that Slater was an operator who appears to distort ‘news events’ and ‘facts’ … routinely fudging or omitting proper acknowledgement of the sources of his regurgitations — while wailing about the same treatment at the hands of the mainstream media. Dull.

But perhaps all that’s changed with his search for ‘news medium’ legitimacy. (retch) For instance, I noticed a recent change in author tags used at his site.
Most blog posts formerly had been labelled as being written ‘by whaleoil’ — a tag which allowed for a fudge factor i.e. a pseudonymous ‘group’ authorship. (This usage sparked conspiracy theories from some observers that some ‘whaleoil’ posts were ghostwritten for the blog by the likes of Jason Ede in the Prime Minister’s Office, shadowy political operative Simon Lusk or PR guy Carrick Graham among other suspects.) Anyway, they’re now being labelled as written ‘by Cameron Slater’.

It’s a sore point with Cameron Slater, but it seems obvious to me from the marked differences in writing style and vocabulary that some of the posts published under his name aren’t his own work. At least, that’s my opinion. In some cases their ‘voice’ seems more … educated. (e.g. some discussing Hawkes Bay’s controversial Ruataniwha dam proposal, various posts which can be seen to assist clients of a certain friendly PR guy, and others which discuss government policy.)

Misleading, do you think? Yeah, sure, me too. It’s a PR attack blog though, remember?

But is it plagiarism? Hmmm.

It may sound unforgiving of me (perish the thought) but for these and other reasons I remain frankly unimpressed by the argument of those who suggest Cameron Slater should be regarded as some kind of enfant terrible of NZ journalism, that he is ‘growing up’, ‘cleaning up his act’ etc. and thus, he should be welcomed into the establishment. Yeah … nah.

Personally, I continue to see Cameron Slater as a malicious and cynical propagandist, someone who warps and twists information in an effort to inflict ‘damage’ on his perceived enemies. Based on my observation and discussions with him, he appears to be a sometimes-corrupt and vindictive keyboard warrior severely lacking in empathy and compassion for those outside his ‘circle’. His website trades in smears and ‘dirty tricks’ in pursuit of his political goals, while whining — disingenuously and using a double standard — about another ‘nasty party’… and how ‘dirty’, ‘hypocritical’ and ‘sanctimonious’ his dad’s political opponents are.

I just don’t see him as a truthful person, for reasons I have explained before on this blog.

A few years ago with some fellow authors, I sued a property spruiker & his company for copyright infringement over their blatant and commercial plagiarism of a book and articles about commercial property investing I’d published (some details here). At the time, a business reporter covering our court action told me that taking such a step made us a target for allegations of hypocrisy and double standards if we were ever caught doing the same. So, of course, I’m careful. (As it turned out, I was sloppily accused of it later in any event.)

I’m sure over the course of writing news stories and articles, editing columns for various authors and publications — and blogging — somewhere along the line, I will have inadequately acknowledged sources — whether for words or an image. (I hope inadvertently. If I’ve done that to you, please let me know, and I’ll do my best to fix it.) I’ve been determined to be careful.

It’s tricky discussing such issues, because I don’t seek to add further condemnation to Benny Johnson. His ‘crime’ compared to the notorious ‘Picasso of Plagiarism’ Jayson Blair doesn’t seem so severe. And he’s paid the price.