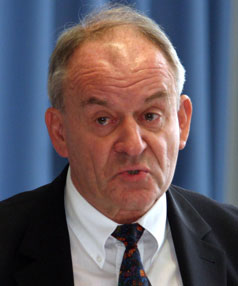 Hawkins; 'Plead guilty, do your time and get on with your life.'
image: Sunday Star Times (click for link)

Disgraced businessmen in the courts on criminal charges have been phoning the country’s highest profile former white-collar prisoner for advice on how to survive life behind bars.

Allan Hawkins, who was jailed in 1992 after being found guilty of fraud involving Equiticorp, refuses to name those calling him, but says he’s been phoned by a number of worried company bosses facing charges, asking for his opinion on what they should do.

It is advice Hawkins gives freely, though the message he has for them is not one many want to hear.

“The system demands a scapegoat. I would advise those guys to put their hands up, and get it over with,” Hawkins says. “Get in there [jail] and then get out again and get on with their lives. “Plead guilty, do your time and get on with your life.”

It is, Hawkins admits, hard advice to take, but copping an early plea means a reduced sentence, and he believes there comes a time to face up to the fact that the system will have its sacrificial lamb and fighting the inevitable is pointless….